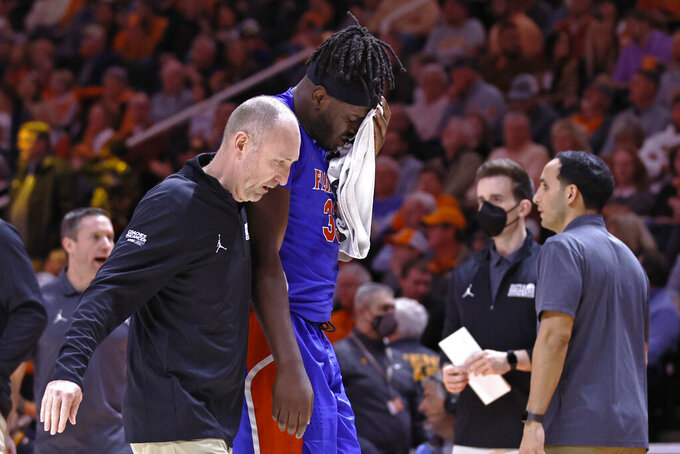 Florida center Jason Jitoboh (33) is lead from the court after being injured on a play during the first half of an NCAA college basketball game against Tennessee Wednesday, Jan. 26, 2022, in Knoxville, Tenn. (AP Photo/Wade Payne)

GAINESVILLE, Fla. (AP) — Already-thin Florida will be without center Jason Jitoboh for the remainder of the season following eye surgery Friday.

Jitoboh, a 285-pound junior who lost more than 50 pounds in the offseason, took a finger to his left eye late in the first half Wednesday night at Tennessee. Coach Mike White declined to get into specifics about the injury but called it “significant.”

“There’s one or more issues that have been brought to my attention," he said. "It’s significant. You wouldn’t want it for anybody. He’s a wonderful young man. It’s just a really tough scenario for him.”

White also ruled out Castleton for Saturday's home game against Oklahoma State (10-8), part of the annual Big 12-Southeastern Conference challenge. Adding to the team's woes, forward Keyontae Johnson has been sidelined for more than 13 months after collapsing on the court during a December 2020 game.

“You can't make up the adversity that these guys have had to overcome and will continue to overcome,” White said.

The Gators (12-8) don't have another post player like Castleton or Jitoboh on their roster. Newcomer Tuongthach Gatkek is a 6-foot-9, 172-pound sophomore with high energy but lacks the size to bang in the paint.

Castleton injured his left shoulder in practice on Jan. 18. He opted against season-ending surgery and is trying to return at some point in his final season.

Jitoboh stepped in and was a surprising contributor, recording 30 points, 18 rebounds, four blocks, two steals and an assist in four starts. It was even more impressive given how much weight he shed after topping 330 pounds during the COVID-19 shutdown in 2020.

“These guys are sick for Jason right now," White said. "I mean sick for him. What this kid has overcome to put himself in a position to step in to replace the best big in our league and now he’s got it rolling a little bit and they’re really close with Jason and now he’s out. It's over for him, this season.

"Who knows what it's going to look like for Colin. It's just been really hard.”