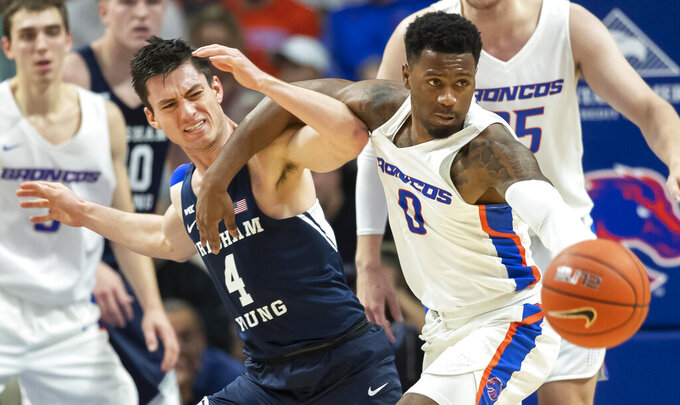 Boise State guard Marcus Dickinson and BYU guard Alex Barcello get tangled on a loose ball in the first half of an NCAA college basketball game Wednesday, Nov. 20, 2019, in Boise. (Darin Oswald/Idaho Statesman via AP)

Alston scored the Broncos’ first four points in overtime but it was Jessup who gave Boise State (2-2) the lead for good with a 3-pointer. He added a steal and dunk plus two free throws.

Boise State’s RJ Williams added 18 points on 6-of-6 shooting before fouling out with 1:48 left in regulation, which ended at 58-all after neither team scored in the final 1½ minutes.

Alston, who posted his first career double-double, became the first Bronco ever to score at least 20 points in each of the first four games of a season.