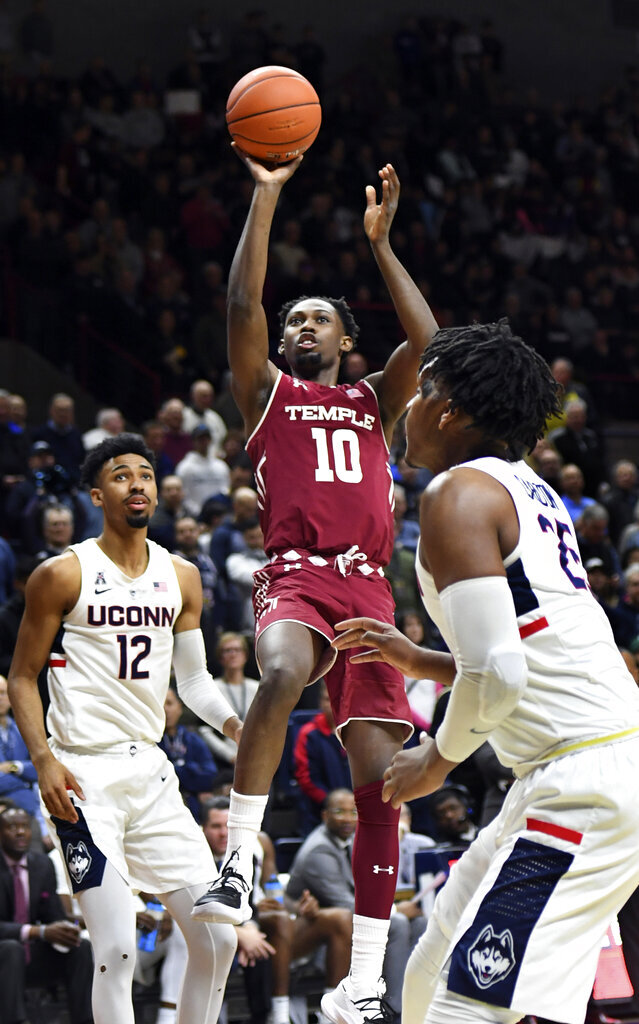 Temple's Shizz Alston Jr. (10) scores two of his 17 first-half points in the first half of an NCAA college basketball game against Connecticut, Thursday, March 7, 2019, in Storrs, Conn. (AP Photo/Stephen Dunn) 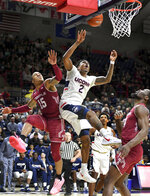 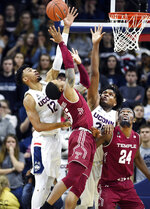 The senior scored a career-high 34 points, leading the Owls back from a six-point second-half deficit to a 78-71 road win on Thursday and keeping their hopes alive for an at-large tournament berth.

"I just wasn't going to let us lose," Alston said. "I knew if we kept pace with them, we could pull it out in the end, but I never wanted them to get separation, because they're a dangerous home team."

Quinton Rose added 20 points for Temple, which secured a bye in the first-round of next week's conference tournament.

Christian Vital had 26 points off the bench for UConn (14-16, 5-12), which lost for the first time this season at Gampel Pavilion. Josh Carlton added 21 points in a losing effort.

UConn trailed by as many as 10-points in the first half, but came back to take its first lead five minutes into the second half on a long 3-pointer from Tyler Polley.

Carlton brought the crowd to its feet with a dunk off a spin move, part of a run that saw UConn go up 53-47.

The Huskies led 58-56 when Alterique Gilbert, their point guard, took an elbow to the face and had to be taken to a local hospital for treatment.

Vital said that took the air out of both the team and the arena.

"He's one of our best players," Vital said. "Clearly, whenever you have one of your better players go down, it's going to disrupt the team, especially in the second half. We had our flow going."

A steal and dunk from Alston put Temple up 65-60 and the Owls hit their free throws down the stretch to hang on.

"He made some big, big baskets tonight," said Temple coach Fran Dunphy, who was coaching his final regular-season road game. "He's not a dunker, but I'm sure he felt he had great legs about him on that play."

Temple: The Owls have won five of their last six to join Houston, Cincinnati and UCF with tournament byes.

UConn: The Huskies finish the regular-season 8-1 at Gampel Pavilion. They are 6-15 on all other courts. UConn will have to win this weekend and take at least two games in the conference tournament to avoid a third straight losing season.

"This is what it should look like in year one of what we've gotta do around here, rebuild this thing," said UConn coach Dan Hurley.

STATS OF THE NIGHT

MOVING UP THE CHARTS

Alston's four 3-pointers gives him 89 this season, tying him with Mike Vreeswyk for fifth place on the program's single-season list. His 589 points this season ranks 20th in program history.

The Huskies, who missed all 15 shots from behind the arc against USF on Sunday, missed their first two in this one. The streak ended with a long 3-pointer from Christian Vital that gave UConn its first points. He ended up hitting seven of 11 3-point shots and the team was 10 of 29 from long distance.

Temple: The Owls close the regular season at home on Saturday with a showdown against UCF, which came into Thursday 12-4 in the conference.

UConn: UConn wraps up the season at East Carolina on Sunday.