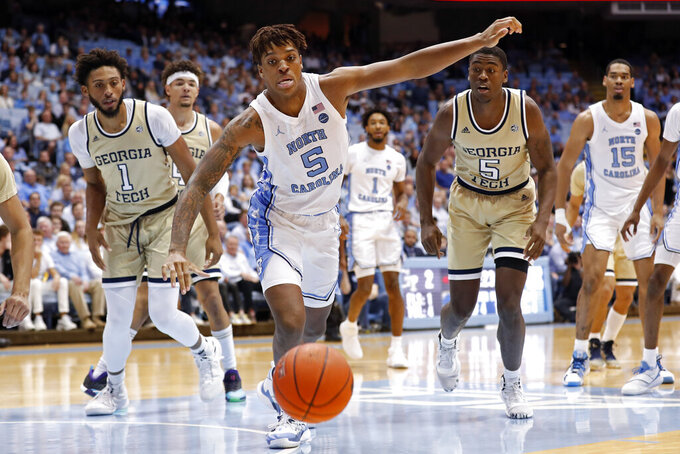 Moses Wright added 22 points for the Yellow Jackets, who shot 59% and kept hitting shots to answer multiple comeback attempts by the Tar Heels after halftime. North Carolina misfired from all over the court from the opening tip, missing its first 15 shots and not getting its first basket until more than 13 minutes into the game.

By that point, Georgia Tech (7-7, 2-2 Atlantic Coast Conference) had already jumped to a 27-4 lead and led by as many as 24 points before halftime. From there, it was simply a matter of playing with confidence to protect a huge lead while UNC frantically tried to dig its way out of the massive hole.

Garrison Brooks had a career-high 35 points as the only source of reliable offense for the Tar Heels (8-6, 1-2), who shot 50% after halftime and got as close as nine early in the second half. The 6-foot-9 junior made 17 of 18 free throws and had 11 rebounds before fouling out with 2:21 left and getting a hearty ovation from a frustrated home crowd.

The loss prevented UNC Hall of Fame coach Roy Williams from earning his 880th career victory to break a tie with late mentor and former UNC coach Dean Smith for fourth on the all-time men’s list.

Georgia Tech: The Yellow Jackets have won three of five since losing three in a row in December, including a blowout home loss in league play to Syracuse on Dec. 7. Alvarado was big at the point, finishing with eight assists along with a pair of 3-pointers against Brooks on defensive switches. Georgia Tech now has its first win in Chapel Hill since 2010.

UNC: Brandon Robinson (12 points) and Justin Pierce (11) were the only other players to hit double figures, leaving Brooks to carry the load essentially by himself. The Tar Heels have had their offensive troubles this season, particularly with star freshman Cole Anthony expected to be out with a knee injury until the second half of January. They recovered offensively to score 56 points after halftime, yet the defense couldn't get stops as Georgia Tech continued answering every surge with a basket or two to stay in control.

Georgia Tech: The Yellow Jackets host No. 2 Duke on Wednesday.