Amid uncertainty, college football trying to plan for season 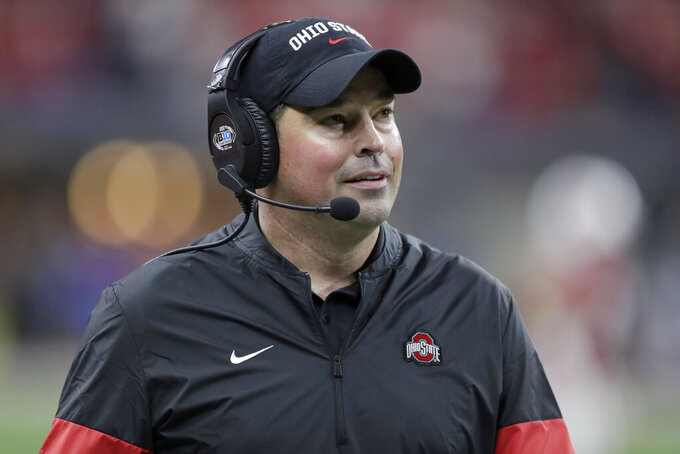 FILE - In this Dec. 7, 2019, file photo, Ohio State head coach Ryan Day watches during the second half of the Big Ten championship NCAA college football game against Wisconsin, in Indianapolis. Between family time, trying to perfect a crock-pot chili recipe and binging on “Tiger King” on Netflix, Ohio State coach Ryan Day is spending his quarantined hours trying to keep coaches and players on track in the face of an uncertain future. (AP Photo/Michael Conroy, File)

COLUMBUS, Ohio (AP) — Spring football was shelved because of the coronavirus. There is still plenty of work going on in college football.

With the pandemic casting uncertainty on the 2020 season, programs are starting to wrestle with two weighty issues: Getting ready to play some kind of season if it is safe to do so and trying to manage what for many would be a substantial financial blow if the season is shortened or canceled.

The NCAA this week formed a working group to look at issues such as how much preseason practice and conditioning would be required once play is green-lighted again. The NCAA said “it is premature to establish a timeline for when these scenarios may be put into place.”

Ohio State athletic director Gene Smith said the discussion is just beginning on prepare-to-play issues after most programs had spring football practice shortened or wiped out and had to deal with their spring sports being called to a halt.

“Do we feel we need a longer period of time to help them physically get back into the grind?” Smith said Friday. “Maybe you need two weeks straight without pads. I don’t know that. That’s where the collaborative of the medical people and the strength coaches and everybody across the country has to occur. A hard date will come in relation to what we figure out there, and we haven’t figured it out yet.”

Buckeyes coach Ryan Day, in an interview on ESPN, said six weeks would be a reasonable “starting point” for getting ready to play. Last week, Alabama coach Nick Saban suggested “teaching sessions on the field” over the summer to prepare for camp.

“If you look at statistics historically on concussions, injuries … the most concentrated time that you practice and not play is in fall camp,” Saban said on a conference call with reporters. “You have more practices, you have to spend more time on the field. So I don’t know that increasing that is going to be beneficial in getting people ready to play.”

On the financial side, losing football would be a devastating blow. Ohio State and other top football programs pump millions into their athletic department budgets, funding less lucrative sports. The NCAA is also slashing $375 million that would normally be distributed to various programs from the NCAA Tournaments that were canceled.

Georgia Tech has made no cuts to staffers salaries, but said an early estimate of losses blamed on the pandemic will exceed $3 million. Wisconsin deputy athletic director Chris McIntosh estimated the Badgers lost some $4 million in revenue due to the loss of the NCAA Tournament and Big Ten Tournament.

“So far the biggest lesson in terms of planning that we’ve experienced as it relates to COVID-19 is it’s incredibly humbling and it’s unpredictable," McIntosh said. "We’re in the mode of preparing for anything, really, and predicting nothing.”

Smith said Ohio State has not ruled out pay cuts or other measures.

“Our university is going through a process to evaluate whether we need to deal with personnel in that form or fashion,” he said, noting that a hiring freeze was in place and budget cuts made before the coronavirus threat emerged.

“We did talk to some of our coaches about the blessings that they have and that we have and needed to make sure that we help as many people as we could,” he said.

Having the season possibly wiped off the calendar is something Smith said he hasn’t begun to think about yet.

“The football season is vital to the budget health of the overall department,” he said. “The bottom line is that it would have a major impact, and I haven’t yet begun to look at the cascade effects of that.”

Ohio State's athletic department will finish with the fiscal year June 30 with about $10.2 million in the bank and money saved on travel when spring sports were eliminated and football coaches not traveling to visit recruits, Smith said. That could get used up quickly if the seven home football games are affected.

Smith said he can't see the players playing in Ohio Stadium in front of more than 100,000 empty seats even if it would bring in television revenue. If it's not safe for the fans to be together, it probably wouldn't be safe for the players, either, he said.