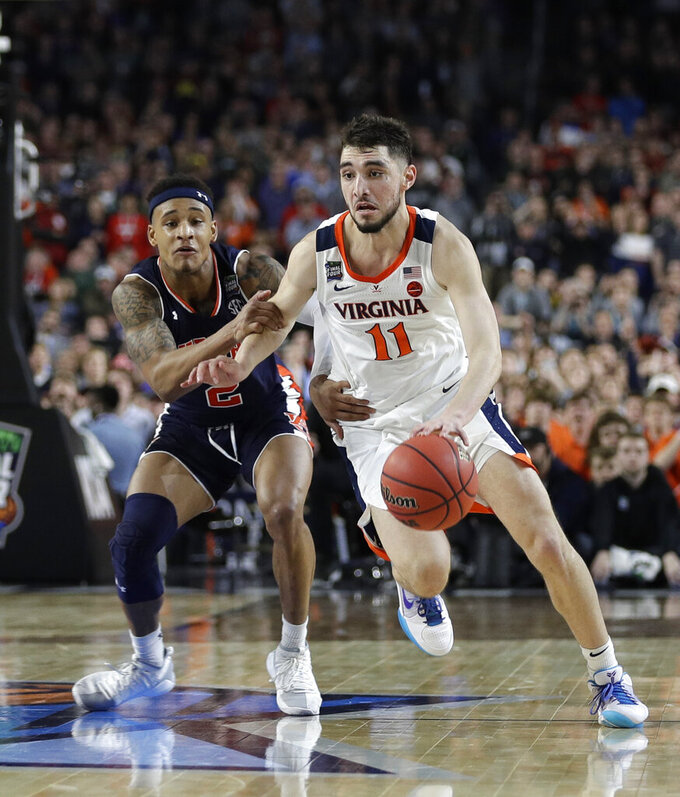 Virginia guard Ty Jerome (11) drives up court ahead of Auburn guard Bryce Brown during the second half in the semifinals of the Final Four NCAA college basketball tournament, Saturday, April 6, 2019, in Minneapolis. (AP Photo/David J. Phillip)

MINNEAPOLIS (AP) — Virginia lost its poise in a monumental first-round loss a year ago and appeared to be in trouble again Saturday night.

A 10-point lead against Auburn, gone in a flash of Bryce Brown 3-pointers. A trip to the national title game, less than two seconds away from being snatched in another disappointing collapse.

Then a big call by an official and three of the gutsiest free throws in the NCAA Tournament.

Virginia and coach Tony Bennett are headed to the title game after all.

"These are moments that every basketball player has dreamed of," Guy said. "Kind of had that feeling in your stomach, like a good nervousness, like, all right, this is my chance. To be able to go to the national championship off of that for these guys and coach Bennett, I really don't have the words."

Virginia (34-3) stymied the Tigers and Brown all night, building the lead to 57-47 with more than five minutes left.

But one antidote to Virginia's pack-line D is a hot shooter. Purdue's Carsen Edwards proved that in the Sweet 16, though the Cavaliers still managed to pull out the victory.

Brown almost shot the Cavaliers back to Charlottesville. The senior guard hit four 3-pointers during a 14-0 run to put the scrappy Tigers up 61-57 with 17 seconds left.

"Just like we have done all year long, even when we got down, there was still time on the clock and there were points to be scored, rebounds to be had," Auburn coach Bruce Pearl said.

Auburn was in control. A year after being bounced by No. 16 seed UMBC in a history-making loss, Virginia was on the verge of an epic collapse.

The team that couldn't get it done was about to add another notch to that resume.

Trailing by 4, the Cavaliers kept their composure as Auburn (30-10) burned through its last two fouls before hitting the bonus.

Virginia nearly lost its chance when Ty Jerome fumbled the ball — and may have double dribbled — and called timeout with 1.5 seconds left to draw up one last-ditch play.

The Cavaliers got the ball into a cutting Guy, who turned and put up a shot that came up short.

The noise inside U.S. Bank Stadium made it so the whistle couldn't be heard, so the Tigers came rushing onto the court.

"We kind thought we had it sealed," said Brown, who finished with 12 points.

Virginia's bench saw referee James Breeding's hand in the air, signaling a foul was called on Auburn's Samir Doughty for sliding under Guy. Pearl didn't see it, and started stomping and screaming when the officials came to review the monitor, checking if it was a 3-point shot.

His team's season on the line, Guy stepped to the free throw line, facing three of the biggest free throws in college basketball history.

"I literally told myself that we dream of these moments," Guy said.

First one, in. Second one, same.

Calm under unmeasurable pressure, Guy calmly sank the third free throw to put the Cavaliers in the lead.

After Auburn's last-ditch attempted failed, Virginia's players rushed the court as the Tigers dropped to the floor.

Known for wilting under NCAA Tournament pressure, the Cavaliers had pulled off the biggest win in program history.

"It feels a little bit sweeter," said Virginia's Ty Jerome, who had 21 points. "To think this time last year we were starting our spring workouts and to still be playing at this point in the season ... it's an unreal feeling."

One more time and they'll be national champions for the first time.