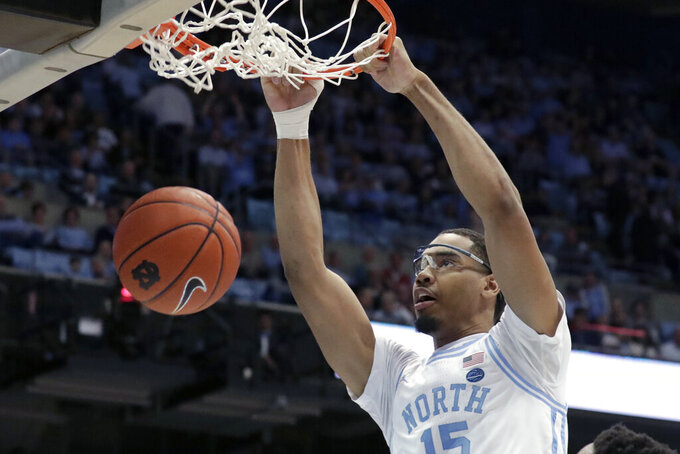 CHAPEL HILL, N.C. (AP) — North Carolina is feeling like it did at the beginning of the season. More importantly, the Tar Heels are winning that way.

Cole Anthony scored 19 of his 28 points in the second half to help North Carolina beat Wake Forest 93-83 on Tuesday night.

Garrison Brooks added 25 points for the Tar Heels (13-17, 6-13 Atlantic Coast Conference), who won their third straight game after a seven-game losing streak. It is their longest winning streak since they opened the season 5-0 and ascended to the nation’s No. 5 ranking.

“The confidence never left,” Brooks said. “I always think that you’ve just got to believe in who you think you are.”

Brandon Robinson had 18 points and made five 3-pointers for North Carolina. The Tar Heels shot 51% from the field, including 64% in the second half, and made 10 of 17 3-point attempts in the game.

North Carolina, which lost at Wake Forest 74-57 on Feb. 11, avoided its first season sweep at the hands of the Demon Deacons since 2003.

The Tar Heels used a 10-3 spurt to take a 75-66 lead with six minutes remaining as part of a stretch in which they scored on six of seven possessions.

“You’ve got to make teams miss,” Wake Forest coach Danny Manning said. “We didn’t make them miss enough to give ourselves a chance.”

Olivier Sarr added 12 points and 11 rebounds, and Jahcobi Neath had 10 points for the Demon Deacons.

Wake Forest: The Demon Deacons dropped to 2-10 on the road, including 1-8 in conference play, to continue a decade-long trend of road woes. Wake Forest is now 8-80 in ACC road games since the start of the 2010-11 season.

North Carolina: The Tar Heels entered the game in last place in the ACC, but their three-game winning streak is the second longest active streak in the conference. Given their improved play down the stretch, they will be a popular pick to create some havoc at next week’s ACC tournament. “I don’t think we’re a last-place team,” Brooks said. “That’s just our record. I think we’re a lot better than that. We’re just going to keep playing.”

Anthony and Brooks have fueled North Carolina’s recent success, combining to average 51 points per game during the winning streak. They have been efficient during that stretch, with Brooks making 26 of 41 (63.4%) field goal attempts and Anthony shooting 23 of 39 (59.0%) from the field and 12 of 20 (60.0%) from 3-point range.

Anthony finished with seven assists and one turnover against the Demon Deacons, making 4 of 5 3-pointers and all eight of his free throws. His recent improvement has a simple explanation.

“It’s not a mathematical formula or anything,” Manning said. “He’s a good player. He’s got a better feel for how teams are guarding him.”

North Carolina introduced six starters on senior night: Robinson, Shea Rush, Robbie O’Han and Caleb Ellis, plus graduate transfers Christian Keeling and Justin Pierce. All six players took the court as if they were going to start, but Ellis returned to the bench just before tipoff.

The Tar Heels played without freshman forward Armando Bacot, who sprained his right ankle Saturday at Syracuse. Bacot had been the only player to start the team’s first 29 games of the season. North Carolina coach Roy Williams said he initially thought Bacot might be able to play. “He felt like he was 65% and didn’t think he could move his feet laterally, and so it wasn’t much of a decision,” Williams said.

Wake Forest was without guard Torry Johnson, who suffered a leg injury against Duke on Feb. 25.

Wake Forest: The Demon Deacons wrap up their regular season Friday night at North Carolina State, which beat them 91-82 on Dec. 7.