Anthony's back, but UNC's offense out of sync for Duke game 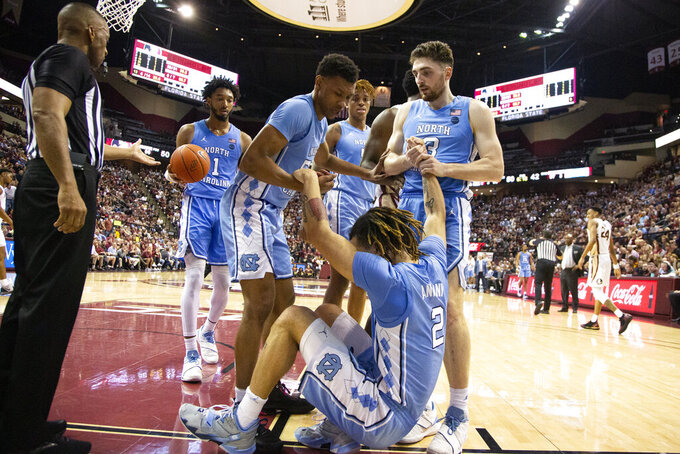 North Carolina guard Cole Anthony (2) is picked up by his teammates after Florida State was penalized for charging in the second half of an NCAA college basketball game in Tallahassee, Fla., Monday, Feb. 3, 2020. Florida State defeated North Carolina 65-59. (AP Photo/Mark Wallheiser)

The most obvious piece is getting junior Garrison Brooks going inside to complement Anthony – considered a likely one-and-done prospect and high NBA draft pick – as the team’s only player capable of consistently creating his own shot.

“The more we practice together, the more we get back to figuring out what Cole is going to want to do with the ball when he’s bringing it up and initiating the offense, the better our timing can get for those kind of things,” junior Andrew Platek said Thursday.

“The main thing for us is that it can’t just stick in his hands or stick in any of the perimeter guards’ hands. We’ve got to keep moving the ball. … We need to keep getting the ball inside.”

The Tar Heels (10-12, 3-8 Atlantic Coast Conference) are coming off a home loss to Boston College and Monday’s loss at No. 8 Florida State. Anthony had 26 points against BC after missing nearly seven weeks and 16 against the Seminoles, though he made just 5 of 22 shots and 3 of 8 free throws against FSU.

Meanwhile, Brooks had 15 points on 7-for-23 shooting in those two games after averaging 18.9 points and 10.2 rebounds during Anthony's 11-game absence.

The struggles were glaring during an 0-for-17 shooting stretch in the second half at FSU spanning about 11 minutes.

It also didn't help that senior Brandon Robinson, averaging 13.1 points, didn’t play at FSU with an ankle injury that coach Roy Williams said could sideline him 1-3 weeks — the latest blow to an injury-hit team that has had players in and out of the lineup to complicate efforts at finding oncourt cohesion.

While Williams points to numerous concerns, he said he has “screamed ‘Move!’ in practice and in games more than I have ever in my entire life.” And Anthony, who said he felt he let his teammates down at FSU, said he must do a better job of setting up Brooks.

“We’ve just got to get him some more touches, get him easy touches,” Anthony said. “I think that reflects on me, that’s what I didn’t do last game – just set him up better and pretty much get him back to doing what he was doing before I came back.”

Under their Hall of Fame coach, the Tar Heels have long pushed the ball in transition and leaned on getting the ball inside (ideally for Williams with a pair of post players). That had them ranked 13th or better in KenPom’s national adjusted offensive efficiency for 12 of Williams' first 16 seasons, including three years at No. 1 and the past four seasons inside the top 10.

But these Tar Heels have their worst figure under Williams, ranking 129th by averaging 104.9 points per 100 possessions while rarely getting out in transition anything like past years.

And the Tar Heels have a month left in the regular season to find a rhythm and salvage any hope contending for an NCAA Tournament bid.

“It’s a matter of time,” freshman big man Armando Bacot said, "but it needs to get nipped in the bud soon, though.”