AP-NORC Poll: US divided on college vs pro sports betting 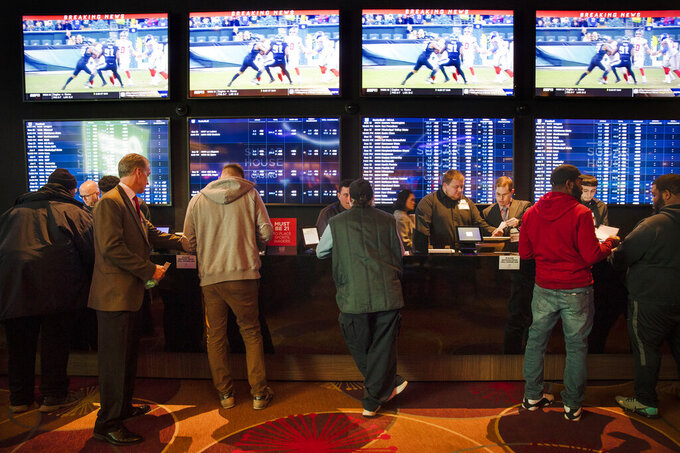 FILE - In this Thursday, Dec. 13, 2018, file photo, gamblers place bets in the temporary sports betting area at the SugarHouse Casino in Philadelphia. About six in 10 Americans want betting on professional sports events to be legal in their state, but fewer feel that way about college athletics, according to a new poll conducted by The Associated Press-NORC Center for Public Affairs Research released Wednesday, March 20, 2019. The poll finds 42 percent favor legal betting on college sports. (AP Photo/Matt Rourke, File)

ATLANTIC CITY, N.J. (AP) — Scrambling to fill out a March Madness bracket? Betting lunch money that you can pinpoint the Final Four better than co-workers or family?

Good luck! You're among about one-third of Americans who at least occasionally bet on sports among friends or through an office pool, according to a poll released Wednesday by The Associated Press-NORC Center for Public Affairs Research.

Still, with all the action on the NCAA men's basketball tournament, the survey finds less support for legal betting on college sports than on the pros. Six in 10 in the survey want betting on professional sports to be legal in their state, far more than the 42 percent who feel that way about college athletics.

Eilers & Krejcik Gaming, which tracks sports gambling legislation, estimates that sports betting will be legal in 39 states by the end of 2023. The company estimates $15.2 billion in sports bets would be made on the NCAA tournament alone if sports betting was legalized across the country.

Men are somewhat more likely than women to support gambling on professional sports, 65 percent to 56 percent. Forty-five percent of men and 40 percent of women think betting on college sports should be legal.

The 57-year-old co-owner of a construction business also favors allowing legal wagers on collegiate athletics, although she worries about possible cheating.

"The one thing I don't like about sports betting is it becomes questionable whether teams or individual players might do something bad," she said. "But then, that could have been happening before legal sports betting, too."

Shelley Matthews, a 70-year-old from Dallas, Texas, is against betting on any level of sports.

"Gambling is not a good idea," he said. "I don't gamble, and I don't know anybody who does."

He, too, worried about the possibility of games being fixed if large amounts of money were riding on them, and said many people gamble more than they can afford, harming their families and communities.

Arturo Isla, a 69-year-old banker from Jacksonville, Florida, opposes wagering on any level of sports, due in large part to the experience of a family friend whose marriage broke up. He said the friend's husband was a heavy gambler.

Isla said he understands the rationale of legalizing, taxing and regulating sports betting to help reduce control of the activity by organized crime and offshore internet sites.

"That's valid, but just because something is legal doesn't mean there aren't negative aspects to it," he said. "People can get addicted, and it can affect their personal lives and their families."

Betting among friends or through office pools is currently the most popular form of sports betting, according to the survey. Thirty-six percent of Americans say they do that at least occasionally, while 20 percent say they've at least occasionally placed bets at casinos and 10 percent through betting or fantasy sports websites or apps.

But the poll also found most people say they currently never gamble on sports, including online (89 percent), at casinos (79 percent) or among friends (63 percent). No more than 5 percent of Americans say they frequently take part in any of those forms of sports betting.

The AP-NORC poll of 1,063 adults was conducted March 14 to 18 using a sample drawn from NORC's probability-based AmeriSpeak Panel, which is designed to be representative of the U.S. population. The margin of sampling error for all respondents is plus or minus 4.1 percentage points.

For more polling information, AP-NORC Center at http://www.apnorc.org and for more AP sports, https://apnews.com/apf-sports and https://twitter.com/AP_Sports