AP Source: Pitino will return for 8th season with Minnesota 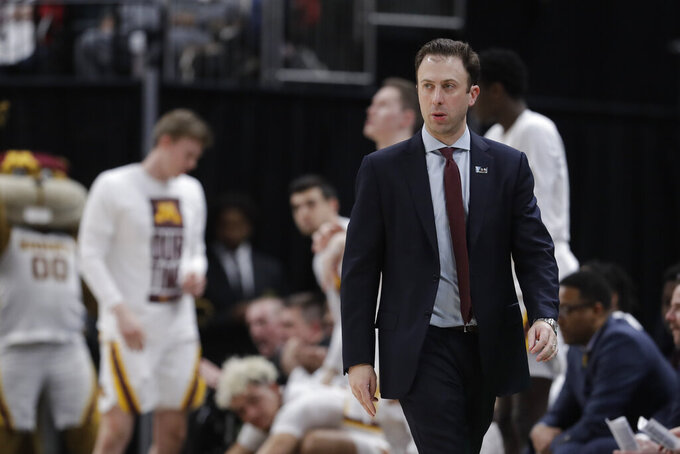 MINNEAPOLIS (AP) — Minnesota coach Richard Pitino will return for his eighth season with the program, a person with knowledge of the situation confirmed on Friday.

The person spoke to The Associated Press on condition of anonymity, without authorization to speak publicly on the matter.

The 37-year-old Pitino has a 127-108 record with the Gophers, including a 48-82 mark in Big Ten regular-season play. They finished 12th in the 14-team league in 2019-20, winning their first-round game in the conference tournament on Wednesday before the Big Ten canceled the remainder of the event out of precaution for the coronavirus pandemic.

The Gophers were scheduled to play No. 5 seed Iowa in Indianapolis on Thursday, but it was called off well before tip-off. They would have needed to win four more games to get the conference's automatic bid for the NCAA Tournament, which they have played in twice under Pitino.

Pitino met with athletic director Mark Coyle on Friday. In a statement provided by the university, Coyle said: “Richard understands my high expectations for our program, which is to compete at a championship level.”

The Gophers had seven newcomers on the roster this season, third-most in the Big Ten. They had an uphill climb after the program's all-time leading rebounder and second-leading scorer Jordan Murphy exhausted his eligibility, guard Amir Coffey turned pro a year early, and big man Eric Curry suffered a season-ending knee injury.

There were signs of progress, with sophomore center Daniel Oturu blossoming into a star. The Gophers won at Ohio State on Jan. 23, completing a sweep of the Buckeyes. They beat eventual co-conference champion Wisconsin by 18 points on Feb. 5 to even their Big Ten record at 6-6, but then collapsed with six losses in eight games by an average margin of defeat of 4.8 points in that stretch. Whether due to a lack of depth or shaken confidence or some other factor, the Gophers just weren't able to come through when it counted, with late blown leads at home against Iowa and Maryland stinging the most.

Pitino took the scrutiny in stride, exhibiting no tension whenever the subject of his job security was raised by reporters.

“I just believe in what we are doing,” he said.