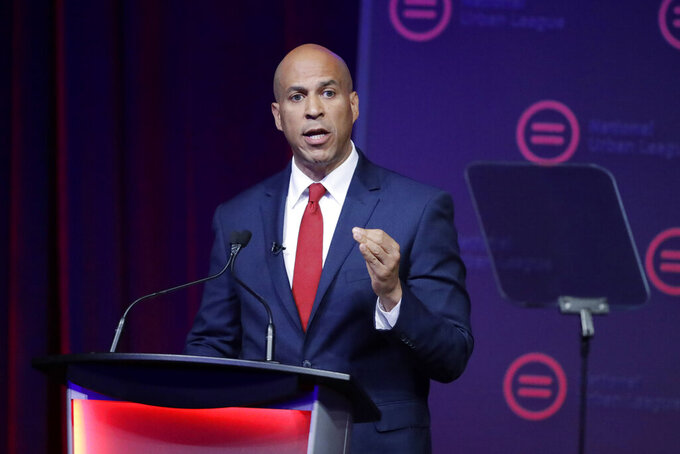 FILE - Then-Democratic presidential candidate Corey booker speaks during the National Urban League Conference in Indianapolis, in this Thursday, July 25, 2019, file photo. Back in January, two Democratic senators introduced federal legislation called the College Athlete Bill of Rights. Among a long list of reforms, there was one item that jumped out as a potential game-changer to college sports: Schools would be required to share 50% of their profit with athletes from revenue-generating sports after accounting for cost of scholarships. (AP Photo/Darron Cummings, File) 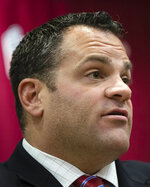 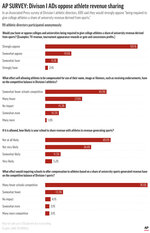 Among a long list of reforms, there was one item that jumped out as a potential game-changer to college sports: Schools would be required to share 50% of their profit with athletes from revenue-generating sports after accounting for cost of scholarships.

“How does that even work?” Boston College athletic director Patrick Kraft said.

In an Associated Press survey sent to 357 Division I athletic directors, 69% said they would strongly oppose “being required to give college athletes a share of university revenue derived from sports.” Another 19.6% said they somewhat oppose sharing athletic department revenue with athletes.

An overwhelming majority of respondents in the survey that granted athletic directors anonymity in exchange for candor said sharing revenue with athletes would make it more difficult for their departments to comply with Title IX and provide equal opportunities to men and women. More than 75% said it would be much more difficult and almost 19% said somewhat more.

“What little revenue 95% of institutions realize through revenue sports, goes toward supporting other sports,” one respondent said. “Paying those 5% of students will devastate the other teams that rely on that revenue to survive....”

Most of the survey respondents came from schools outside the Power Five conferences — only 11 of the 99 ADs who participated in the survey were from the Power Five — the wealthiest and most powerful in college sports that include the Atlantic Coast Conference Big 12, Big Ten, Pac-12 and Southeastern Conference.

Nearly 69% of respondents came from the 22 conference that do not play FBS football.

Dozens of schools have athletic departments that bring in revenue surpassing $100 million annually, but the NCAA says only about 25 in 2019 actually made a profit.

Football is the most common revenue-generating sports along with men's basketball. For schools in the wealthiest conferences such as the Big Ten and Southeastern Conference, media rights contracts with television networks bring hundreds of millions of dollars each year — with football as the centerpiece of those deals.

“I'm funding 31 sports here,” said Kraft, whose school competes in the Atlantic Coast Conference. “I'm trying not only to get the best experience for our football players but for our swimmers and our sailors and our skiers. We're all in this together. So football ticket revenue helps fund that.”

The College Athlete Bill of Rights introduced by Sens. Cory Booker (D-N.J.) and Richard Blumenthal (D-Conn.) is one of six related to college sports in the legislative pipeline on Capitol Hill. It is the only one that is pushing for revenue sharing, which seems like a radical idea, unlikely to survive compromises.

But allowing schools to pay college athletes a stipend of a few thousand dollars per semester to cover the full cost of attendance was once a nonstarter for the NCAA and now it's routinely part of an athletic scholarship. Permitting college athletes to earn money off their name, image and likeness once seemed like a radical idea, but that will soon be a reality.

Plenty of people outside college sports don’t see anything radical about the athletes at the center of a multibillion dollar business sharing in the revenue that business generates.

“College sports revenues have exploded exponentially in the last 15 years, but none of that money has gone to the actual players. To act like the sky will fall if athletes receive a fair share of the money their labor produces is downright disingenuous and fails to acknowledge the major civil rights inequities inherent in the industry,” Sen. Chris Murphy (D-Conn.) said in a statement to the AP.

For some at schools with smaller budgets, the prospect of being forced to share revenue doesn't register as quite so alarming.

“I think we’ve always adapted to whatever the rules are presented, we make changes,” Central Arkansas athletic director Brad Teague said. “We make it work. But what is income at the end of the day? At our level we have no income. There is nothing to share.”

Much of the spending at all levels goes into coaching salaries. Skyrocketing salaries at the top of college sports — with football assistants at Power Five schools commonly drawing $1 million per year pay checks — have raised the market for coaches at all levels and even in other sports.

Teague was among the nearly 29% of athletic directors who said they would strongly favor a law that would allow schools to cap the salaries of coaches and staff. Another 40% said they would somewhat favor a legal way to cap salaries.

To get around antitrust laws would take an act of Congress. The NCAA is already looking for help from federal lawmakers to set national standards for NIL compensation for college athletes. Most of the bills put forth so far have been limited to NIL, but the College Athlete Bill of Rights was a reminder that once Congress gets involved it can be difficult to put limits on how much.

A survey questioned asked ADs about what entities should be responsible for regulating college sports.