AP Was There: Chalmers, Jayhawks best Memphis for '08 title 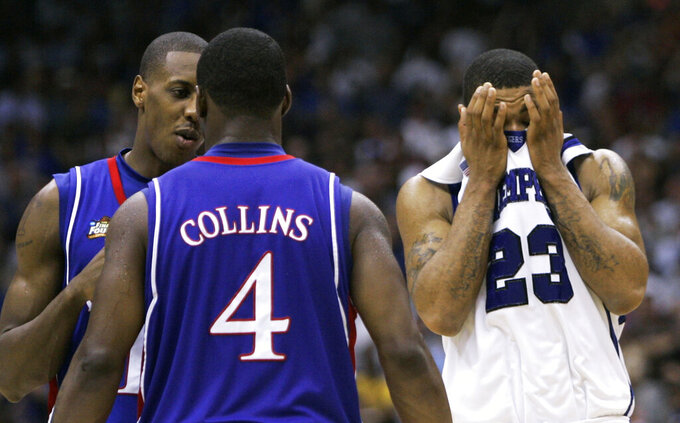 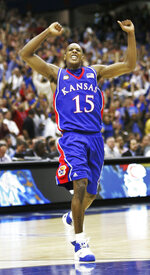 EDITOR'S NOTE — A panel of Associated Press sports writers voted in March 2020 on the top 10 men's basketball games in the history of the NCAA Tournament. They are being republished because the sport has been shut down because of the coronavirus pandemic. The following game was voted No. 6 and this AP game story was sent April 7, 2008.

The Kansas guard made one of the biggest shots in NCAA history Monday night, a 3-pointer with 2.1 seconds left to force overtime and lead the Jayhawks to the national championship with a 75-68 victory over Memphis.

Chalmers' shot was the most tremendous moment of a tremendous game that saw Memphis squander a nine-point lead over the final 2:12. Derrick Rose and Chris Douglas-Roberts missed four of five free throws over the final 72 seconds to set the table for Chalmers, a junior from Anchorage, who is suddenly a household name.

"Probably the biggest shot ever made in Kansas history," Kansas coach Bill Self said.

"That has to be one of the biggest shots in basketball history," teammate Rodrick Stewart said.

The win gave Kansas its first title since 1988, when "Danny (Manning) and the Miracles" pulled an upset over Oklahoma.

Chalmers' shot came almost 25 years to the date after Charles became famous with his stick-back of Dereck Whittenburg's air ball to give North Carolina State a title — the one that sent Jim Valvano scurrying around the court looking for someone to hug. Smart's baseline jumper with a second left gave Indiana a one-point victory over Syracuse in 1987.

Chalmers was every bit as clutch, while Memphis was the exact opposite. The ending made a mockery of Memphis coach John Calipari's theory that his players, among the country's worst with 59 percent free-throw shooting, didn't have to be good because they would always come through when the stakes were highest.

"Ten seconds to go, we're thinking we're national champs, all of a sudden a kid makes a shot, and we're not," Calipari said.

Hustling the ball down the court with 10.8 seconds left, no timeouts and trailing by three, Sherron Collins handed off to Chalmers at the top of the 3-point line, and Chalmers took the shot. It hit nothing but net and tied the score at 63.

Robert Dozier missed a desperation heave at the buzzer, and Rose went limping to the bench, favoring his right leg.

Brandon Rush, Darrell Arthur and Darnell Jackson scored the first six points of overtime to put Kansas ahead 69-63. Memphis, clearly exhausted, didn't pull any closer than three the rest of the way.

Rose played all 45 minutes in what could very well be his last college game.

"Overtime, they kind of beat us down," Calipari said. "I didn't sub a whole lot, because I was trying to win the game at the end."

Although Chalmers will go down in history, Rose was setting himself up to be the star of the game, the next 'King' in Memphis. He completely took over in the second half, scoring 14 of his team's 16 points during one stretch to lift the Tigers (38-2) to a 60-51 lead with 2:12 left.

But Kansas (37-3) used the strategy any smart opponent of Memphis' would, fouling the heck out of one of the country's worst free-throw-shooting teams and when Rose and Douglas-Roberts started putting up bricks, KU had its opening.

"Being a leader of this team, I feel I let them down by missing them," Douglas-Roberts said. "I told them that I take the blame."

Everyone on Kansas deserves some credit. Arthur was dominant inside, finishing with 20 points and 10 rebounds, lots on dunks and easy lay-ups off lob passes. Chalmers finished with 18 points. Rush had 12 and Collins had 11 points, six assists and did a wonderful job handling Rose for the first 28 minutes.

Rose wound up with 18 points in a game that showed how ready he is for the NBA. He was 3-for-4 from the line, however, and that one miss with 10.8 seconds left is what almost certainly would have sealed the game and given the Tigers their first title.

Instead, the title goes back to Lawrence for the third time in the fabled program's history.

The inventor of the game, James Naismith, was the first Jayhawks coach. It's the school that made household names of Wilt Chamberlain, Manning and yes, even North Carolina's Roy Williams, the coach who famously left the Jayhawks, lost to them in the semifinals, but was, indeed, in the Kansas cheering section Monday wearing a Jayhawks sticker on his shirt.

This game was not about coaches or side stories, though. It was about the game, and what a dandy it was. It was a well-needed reprieve from a more-or-less blah tournament in which many games were blowouts and far fewer — Kansas' two-point win over Davidson in the regional finals was one exception — were memorable.

This was the first overtime in the title game since 1997, when Arizona beat Kentucky 84-79.

"Being up seven, being down nine, being up two, down five, going to overtime," Kansas center Cole Aldrich said. "We fought it out, and it's surreal. It's nuts."

Rose went crazy during Memphis' second-half run. A 3-pointer here, a scooping layup for a three-point play next. Then, the capper, an off-balance, 18-foot shot off glass with the shot-clock buzzer sounding. Officials at first credited Rose with a 3, but went to the replay monitor and saw he was clearly inside the line. Even with the point deducted, Memphis had a 56-49 lead and all the momentum. Most teams would have been demoralized.

More than one, in fact.