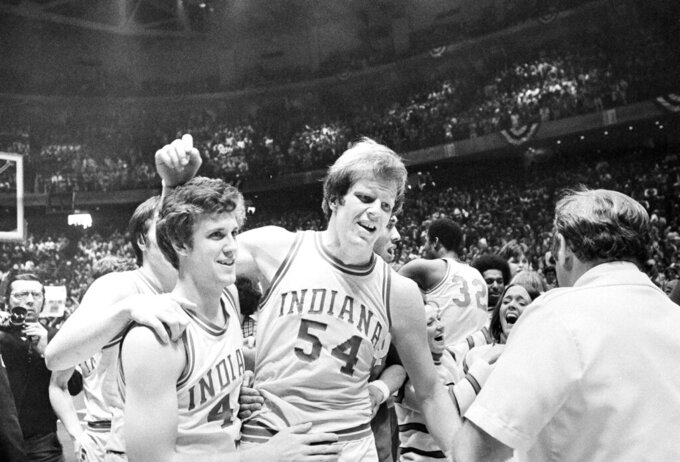 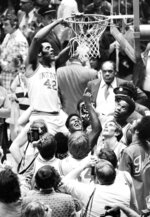 Gonzaga takes a 30-0 record into Saturday night's Final Four game against UCLA. The Bulldogs are trying to become the eight team in men's college basketball to complete an undefeated season with the NCAA Division I national championship.

The last team to do it was Indiana in 1975-76 and the Hoosiers wrapped up their run with title game win over Michigan. Below is The Associated Press game story as it appeared in the Pottsville (Pa.) Republican on March 30, 1976.

PHILADELPHIA (AP) – The Indiana Hoosiers were handed the No. 1 ranking at the start of the season, but that doesn’t mean anything unless you earn it on the court.

The “perfect” Hoosiers capped a glorious 32-0 season Monday night with a businesslike 86-68 victory over Michigan in the NCAA finals, ending a long quest for college basketball’s Holy Grail.

“If we don’t deserve to be national champions, then I don’t know who does,” said Indiana’s superlative guard, Quinn Buckner. “We won all our games. What else can you do?”

The Hoosiers survived several pitfalls on the road to the championship – including a mild midseason slump that relegated Buckner to the bench. During this time, they struggled to beat Michigan twice by close scores.

Despite what Buckner called “peaks and valleys,” Indiana made it through the Big Ten season undefeated, a performance that Michigan coach Johnny Orr called “unbelievable.”

What happened thereafter was even more impressive. The Hoosiers, playing in one of the toughest regional tourneys in NCAA history, defeated St. John’s, Alabama and Marquette to win the Mideast and advance to the gold-plated Final Four in Philadelphia.

“It was very physical all through the Big Ten and just as physical in the regionals,” pointed out Indiana strongman Kent Benson. “It was as physical as I can remember.”

UCLA’s Bruins, the defending champions, presented no problem to peaking Indiana in Saturday’s semifinals at the Spectrum. The Hoosiers, who had beaten UCLA by a shocking 20 points on opening day, handled them with almost as much ease the second time. While the Big Ten champions were disposing of tall and talented UCLA, Michigan was belaboring Rutgers.

It was the first time in NCAA playoff history that two teams from the same conference met in the championship game.

“It’ll probably be the last time in our lifetime that we ever see something like this again,” said Orr. “Take a good look at it.”

Indiana’s brightness didn’t shine until after the Hoosiers were hit by adversity. Bob Wilkerson, one of the few starting guards in the country at 6-foot-7, suffered a concussion in the early going and had to be carried from the court on a stretcher.

“When Bobby got hurt we knew we had to go at it tougher,” said Buckner. “Bobby’s a big part of our team. We did go at it.”

Actually, the Hoosiers didn’t really “go at it” until after the start of the second half. The Wolverines kept ahead of their Big Ten colleagues with a brilliant fast break, and by intermission led 35-29.

Benson, a blond giant with a pacifist temperament off the court and a killer instinct on, blamed his first-half timidity for the Hoosiers’ uncharacteristic performance before intermission. Benson pulled himself together in the second half and in the process pulled Michigan apart. The All-American center took charge of things, scoring 15 of his 25 points and collecting six of his nine rebounds.

Scott May also had a high-powered second half for Indiana, scoring 18 of his game-high 26 points and pulling down all of his eight rebounds.

Orr, who almost beat Indiana during the regular season, found the Hoosiers much stronger in their third meeting – in fact, downright indestructible in the second half.

“They played a great second half,” noted Orr, bitterly disappointed. “I don’t know what else we could have done.”

The splendid season matched the 32-0 perfection of North Carolina in 1957 (for) the best undefeated record in NCAA history.

“For two years, this (NCAA championship) has been our objective,” said Indiana coach Bobby Knight. “Not just this year, but for two years these kids have worked hard – and no one knows how hard any better than I do.”