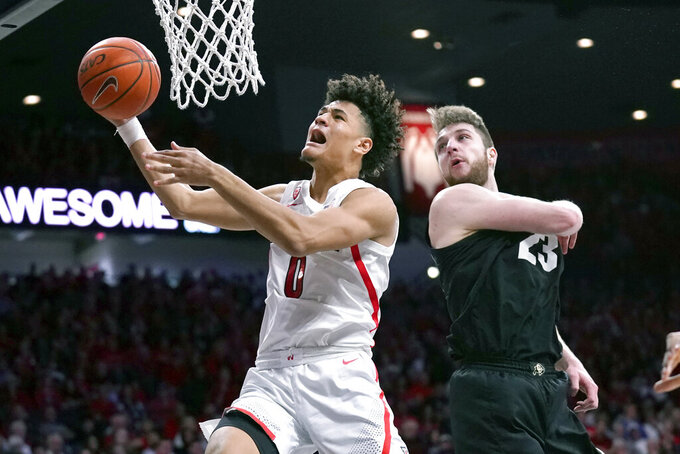 TUCSON, Ariz. (AP) — Arizona freshmen Nico Mannion, Josh Green and Zeke Nnaji all played one of their best games of the year on Saturday. So did some of the unheralded veterans like Dylan Smith, Ira Lee and Max Hazzard.

The athleticism was impressive, the shots were falling and the defense was intense. When it was over, Arizona had powered its way to a 75-54 win over No. 20 Colorado that was rarely in doubt in front of a raucous crowd at the McKale Center that enjoyed every minute.

After a few weeks of underachieving, the Wildcats are starting to look more like the Pac-12 powerhouse they were projected to be.

“That was one of those really fun afternoons," Arizona coach Sean Miller said.

Smith and Green both scored 13 points while Mannion and Nnaji each added 12. There were some good individual moments — like Green's up-and-under layup or Lee's offensive rebounding and dunks — but this win was much more about the entire roster playing up to its capability.

Arizona (13-5, 3-2 Pac-12) has won all three of its home conference games. The Wildcats had a double-digit lead for the last 18 minutes of Saturday's game, stopping the brief Colorado rallies with quick baskets.

Arizona got contributions from all over the roster. Hazzard scored nine points on three 3-pointers, Jemarl Baker Jr had seven points and Lee had six points and seven rebounds. Nnaji added 12 rebounds, including seven on the offensive end.

Colorado (14-4, 3-2) took a 10-5 lead in the opening minutes, but Arizona rallied with the next seven points and the Buffaloes never led again. McKinley Wright led Colorado with 15 points and D'Shawn Schwartz added 12.

Arizona shot 52% from the field in the second half to slowly pull away. The Wildcats also had a 39-25 rebounding advantage.

“We pride ourselves on defense and rebounding, and we didn't do either one,” Colorado coach Tad Boyle said.

Arizona jumped out to a 34-20 lead late in the first half when Smith snatched the ball out of Shane Gatling's hands and ran the length of the floor before finishing with a slam.

Wright countered for Colorado with a 3-pointer at the buzzer that banked in off the glass, pulling the Buffaloes within 34-23 at the break.

Colorado shot just 8 of 25 (32%) in the first half. Boyle pointed to a few things the Buffaloes could have done better, but also said Arizona played a terrific game.

“Sometimes as a coach you want to look inward, and you have to, and I will, but there's also times when you look at the other team and say ‘We got their best shot tonight,'" Boyle said. “We got Arizona's best shot. I'm not sure Arizona got Colorado's best shot.”

Hazzard had another quality game two nights after pouring in 24 points during a win against Utah. The 6-foot senior is a graduate transfer from Cal Irvine and had six 3-pointers against the Utes.

He provided some instant offense again off the bench on Saturday, knocking down those three 3-pointers in 16 minutes. Hazzard drew some gasps from the crowd when he pulled up on a fast break for a 3-pointer. Those gasps turned to cheers when it splashed through the net.

That's usually not a shot Miller would love, but with Hazzard, the coach will make an exception.

“Not all of our players are equal when they pull up from 3,” Miller said. “Some make more than others. You can ask the players on our team, when you see that guy shoot every day, he can really, really get going.”

Colorado: The Buffaloes are a quality defensive team even if this wasn't one of their best outings. But the offense must be more efficient if they're going to be a contender for the top of the Pac-12.

Arizona: Two straight home wins might have put the Wildcats back on track and they'll be tough to beat if they play like this. Arizona's freshmen are growing up quickly and they're getting lots of contributions from others like Hazzard, Baker and Lee.

Arizona: The Wildcats get a week off before a road game against Arizona State on Saturday.