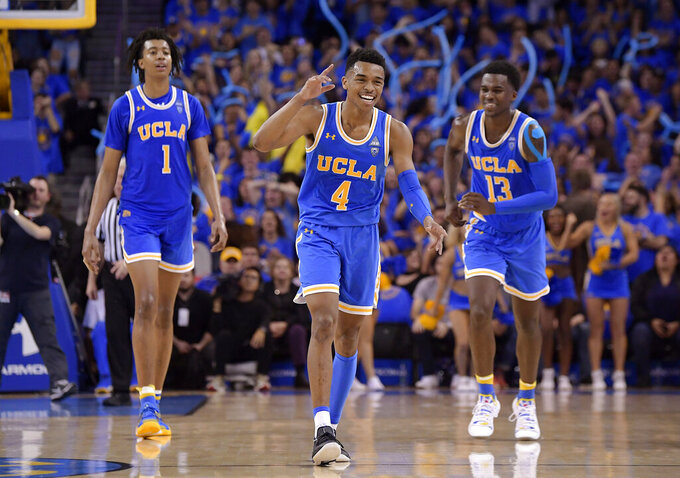 FILE - In this Feb. 28, 2019, file photo, UCLA guard Jaylen Hands, center, celebrates after hitting a 3-point shot as center Moses Brown, left, and guard Kris Wilkes follow during the second half of the teams' NCAA college basketball game against Southern California in Los Angeles. UCLA won 93-88 in overtime. . The Bruins’ sophomore guard has been one of the conference’s best players all season and was named player of the week after finishing with 21 points and 10 assists in UCLA’s win over rival USC. (AP Photo/Mark J. Terrill, File) 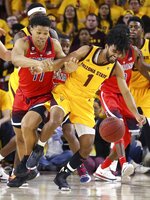 GAME OF THE WEEK: Arizona State at Arizona, Saturday. The Sun Devils could use a win to solidify their at-large NCAA Tournament chances. The Wildcats are seeking a better seed in next week's Pac-12 Tournament with a victory. Regardless of what's at stake, this is a rivalry game and it's always heated. Arizona State won the first meeting 95-88 after Remy Martin scored a career-high 31 points, but that game was in Tempe. Saturday's game is in Tucson, where McKale Center is sure to be hopping on senior night. The Sun Devils already have the No. 2 seed for the conference tournament locked up.

LOOKING AHEAD: Eight seeds and two first-round byes for the Pac-12 Tournament still have to be determined in the final week of the regular season. Washington and Arizona State have the top two spots and first-round byes, while Washington State and California are set as the final two seeds. Oregon State, UCLA and Utah are all at 9-7. Colorado, Oregon and USC are all 8-8, so they still have a shot at earning the coveted first-round bye if things fall right. The Oregon schools play the Washington schools this week and the Southern California teams play the two mountain schools, Colorado and Utah.

INSIDE THE NUMBERS: Washington Matisse Thybulle is currently tied for second on the Pac-12's single-season steals list with 101. He'll need nine in two games this week to match the record set by Cal's Jason Kidd in 1993. ... The Pac-12 Tournament starts a week from Wednesday in Las Vegas. ... Oregon State's Kylor Kelley has 99 blocked shots this season, good for ninth all-time in the Pac-12. He moved into the top six with three blocked shots in two games this week.

PLAYER TO WATCH: Jaylen Hands, UCLA. The Bruins' sophomore guard has been one of the conference's best players all season and was named player of the week after finishing with 21 points and 10 assists in UCLA's win over rival USC. He has six double-digit assist games and is 11th nationally with 6.5 per game.

ON THE WOMEN'S SIDE: No. 6 Oregon wrapped up the regular-season title by sweeping the Arizona schools last week and will be the No. 1 in the conference tournament, which starts Thursday in Las Vegas. .... Ducks guard Sabrina Ionescu was named the Pac-12 player of the week for the second straight season after averaging 19.5 points and 8.1 assists. She also set the NCAA single-season triple-double record with seven and the all-time mark with 17. ... The Ducks, No. 7 Stanford, No. 11 Oregon State and No. 25 UCLA all have first-round byes in the conference tournament.