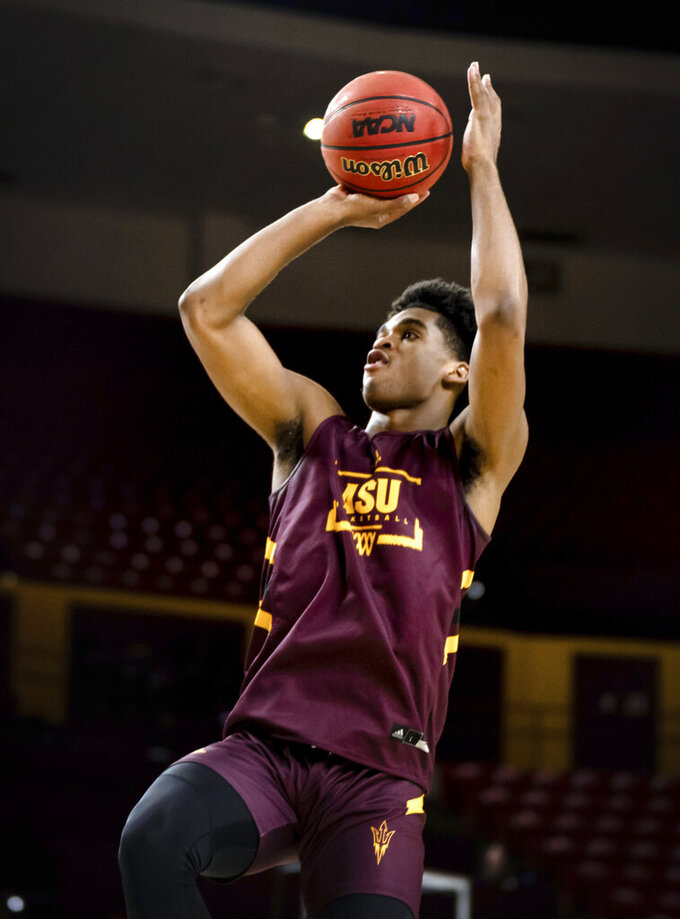 In this image provided by Sun Devil Athletics, Arizona State's Josh Christopher works out during NCAA college basketball practice on Nov. 5, 2020, in Tempe, Ariz. Christopher is blessed with prodigious basketball talent and a strong inner drive to be the best at what he does, a combination that made him one of that nation's top recruits in the class of 2020. (Katie MacCrory/Sun Devil Athletics via AP) 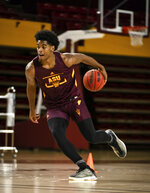 TEMPE, Ariz. (AP) — Josh Christopher is blessed with prodigious basketball talent and a strong inner drive, a combination that made him one of that nation's top recruits in the class of 2020.

When the five-star guard was choosing where he would play in college, he wanted someone who would challenge him, push him to become even better.

But a few months after arriving in Tempe, Christopher felt like Hurley wasn't coaching him hard enough. He even told Hurley so last month.

The coach initially told Christopher there wasn't much to be negative about, but when freshman missed an assignment in an intrasquad scrimmage, he felt the full Hurley fury.

"In my head, I was like, ‘Woah, what’s going on?’” Christopher said. “And then I was like, ‘Oh yeah, this is what I asked for.’ So it was cool. I know how to stay composed, I’m not really too emotional when it comes to that stuff. I know that these coaches get like that because they want to help us and see us be great, so it’s all love.”

Christopher arrived in the desert as the most heralded incoming freshman in program history.

An athletic 6-foot-5 shooting guard, he is a pure scorer who's a superb finisher at the rim and can get off tough shots in traffic. He's a solid perimeter shooter, can blow past defenders to create his own shot and is a good passer.

At No. 12 in the 247Sports composite in the class of 2020, he's Arizona State's highest-rated incoming freshman in the recruiting service era (since 2007). With 6-8 forward Marcus Bagley, he headlines the highest-rated class in school history at No. 7 nationally.

The Carson, California, native has shown off his talent in practice already, impressing Hurley and his teammates as they head into the start of the season next week.

“He’s just a basketball player,” senior guard Remy Martin said. "He loves to play, he scores the ball well and he brings that energy. When people are down, he’s happy to be in the gym, he wants to play basketball. And when you have people that love to play basketball and love to win, it always is fun to play.”

The decisions by Martin and Alonzo Verge Jr. to return with the addition of Christopher have ratcheted up expectations in Tempe.

Martin is back after flirting with the NBA and was named a preseason All-American. The volume-scoring Verge also peeked at the NBA before deciding to come back.

The Sun Devils are looking a lot like the Guard U team that went to the NCAA Tournament in 2018.

The loaded lineup led to Arizona State being ranked No. 18 in The Associated Press preseason poll, the Sun Devils' highest since the 2008-09 team led by James Harden was No. 15.

“On this team, it can be anybody’s night,” Christopher said. "Get the ball to the hot hand, and I feel like that’s all it could come down to. It could be anybody’s night, so on any given night it could be all of us. But as long as guys make the right plays and knock down shots, it’s going to be a pretty unstoppable team.”

As one of the nation's best high school players, Christopher was recruited by nearly every major program. He chose Arizona State in part because his brother was already there, but also because he thought Hurley would be the best coach to push him to the next level.

It's working out so far.

Christopher has gotten what he asked for so far and it's going to make him — and the Sun Devils — much better for it.