Arizona's Lloyd pulling all the right strings in first year 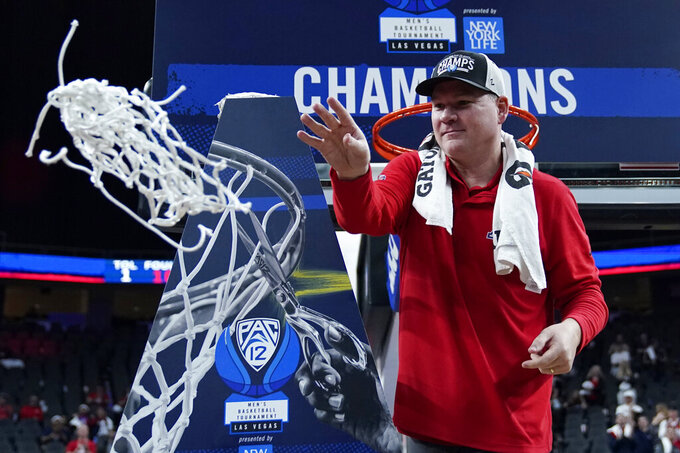 Arizona head coach Tommy Lloyd cuts down the net after defeating UCLA in an NCAA college basketball game in the championship of the Pac-12 tournament Saturday, March 12, 2022, in Las Vegas. (AP Photo/John Locher)

Thoughts, words and decisions are measured, the emotional tides of more mercurial coaches a waste of energy to him. Credit is deflected, attention for someone else.

This outwardly easygoing nature masks an undercurrent of confidence, determination and an attention to detail that has fueled No. 2 Arizona's accelerated ascension under its first-year coach.

“He knew what he wanted to do and came in with a plan,” Arizona associate head coach Jack Murphy said. “Every step of the way, when any of us — myself or anyone on the staff — wanted to kind of speed things up or jump steps, he was always the voice of reason and was sticking to his plan.”

The scoffing could be heard from Tucson outward when Lloyd was hired last year.

Arizona needed the right person to steer the program back into prominence after Sean Miller was fired amid FBI and NCAA investigations into questionable recruiting practices.

Lloyd had proven himself as a recruiter and top assistant, helping Mark Few create a national powerhouse in 22 years at Gonzaga. He had just never been a head coach.

Those who know basketball and Lloyd saw him as the perfect fit — and they were right.

Lloyd brought with him many of the same principles and systems that had been so successful at Gonzaga, added a few tweaks of his own and stormed through one of the best first-year seasons in college basketball history.

Unranked in the preseason and picked to finish fourth in the Pac-12, the Wildcats went 31-3 to sweep the conference regular-season and tournament titles. Lloyd joined Indiana State's Bill Hodges in 1979 and North Carolina's Bill Guthridge in 1998 as the only first-year coaches to earn a No. 1 seed in the NCAA Tournament.

Arizona opens the West Region on Friday in San Diego against the Wright State-Bryant winner in its bid to reach the Final Four for the first time since 2001.

“My only objective has been to pour into these guys everything I’ve got,” Lloyd said after Arizona beat UCLA in the Pac-12 title game. “That’s how I’ve attacked it on a daily basis.”

Arizona lost four of its top six scorers from a year ago, but the ones who stuck around have been a perfect fit for the systems Lloyd has employed in the desert.

Like Gonzaga, Arizona's offense requires players to read and react to multiple options on any given play. The returning core of Bennedict Mathurin, Azoulas Tubelis, Christian Koloko, Dalen Terry and Kerr Kriisa all have high basketball IQs and routinely make good decisions at both ends of the floor. Transfers Justin Kier, Pelle Larsson and Oumar Ballo fit a similar mold.

There's also been a collective buy-in, the players believing in their affable coach's plan being their best chance for success.

“He's a players' coach — he does everything for his players,” Koloko said. “He's a very detail-oriented coach, goes into the detail to really teach you the game.”

Part of what has made Gonzaga so successful through the years is its player development. The Zags have landed top-tier recruits like Chet Holmgren and Jalen Suggs the past two years, but their roster is primarily composed of players who got better as they waited for their turn.

Since he arrived in the desert, Lloyd has fast-tracked Arizona's player development during offseason workouts and in-season practices.

An explosive-at-times player as a freshman, Mathurin has transformed into a potential NBA lottery pick by improving his playmaking abilities and with a huge boost in confidence.

Koloko has gone from a skinny shot blocker and dunker as a freshman to a filled out, intimidating presence with a widened offensive repertoire. Fellow big man Ballo has made similar strides after being buried on the bench at Gonzaga last season.

Terry has made perhaps the biggest leap. Arizona's ninth-leading scorer last season, the athletic 6-foot-7 guard has done all the little things the Wildcats have needed this year, even assuming point guard duties in the Pac-12 Tournament after Kriisa sprained his ankle in the quarterfinals.

“Did the pieces fit? Yeah, they fit well, but he molded them and developed them in the framework of our system and his team,” Murphy said. “That's been incredible.”

Just don't expect Lloyd to brag about it. That's for someone else.