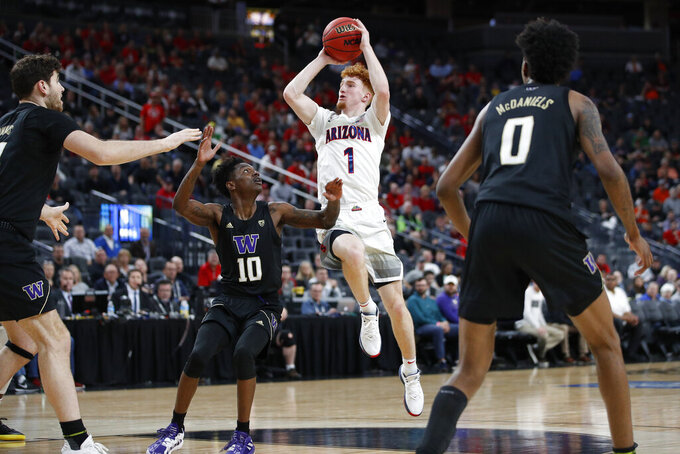 Arizona's Nico Mannion (1) shoots over Washington's Elijah Hardy (10) during the second half of an NCAA college basketball game in the first round of the Pac-12 men's tournament Wednesday, March 11, 2020, in Las Vegas. (AP Photo/John Locher)

“I have decided to declare for the 2020 NBA draft,” Mannion posted Tuesday on Twitter. “I want to thank everyone who has truly helped me throughout my journey, you know who you are, including coach (Sean) Miller for giving me the opportunity to play in front of the best fans in the country.”

Mannion arrived in Tucson as the highest-rated recruit in a class that included Nnaji and Josh Green.

Mannion averaged 14 points and was second in the Pac-12 with 5.3 assists per game during his lone season at Arizona. The 6-foot-3 guard from Phoenix earned second-team all-Pac-12 honors.

Mannion was born in Italy, where his father, Pace, played professionally after being an NBA draft pick in 1983. A heady guard and creative passer, he's projected to be a first-round pick in 2020.

"Nico is an exceptional teammate, a very coachable player and a fun person to be around," Miller said in a statement. “His future as an NBA point guard is very bright! All of us at Arizona wish him nothing but success!”

Nnaji declared for the draft last week and Green is expected to make a decision soon.

Arizona shored up its backcourt for next season on Monday, when Seattle graduate transfer Terrell Brown committed to the Wildcats.