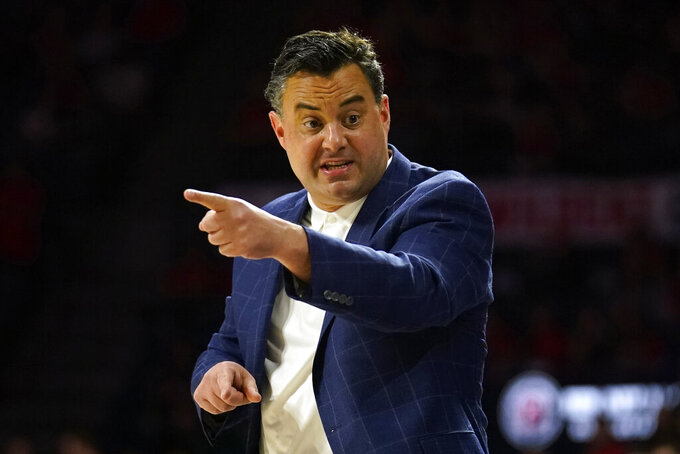 FILE - In this March 7, 2020, file photo, Arizona head coach Sean Miller gestures during the first half of an NCAA college basketball game against Washington, in Tucson, Ariz. Miller has reeled in some of nation's best recruiting classes during his 11-year stint at Arizona. His latest group has a distinctly international slant to it.(AP Photo/Rick Scuteri, File)

Sean Miller has reeled in some of nation's best recruiting classes during his 11-year stint at Arizona, players who starred in college, won multiple NCAA Tournament games, went on to the NBA,

His latest group has a distinctly international flavor to it.

“We set out as far back as a couple of years to mix it in and make it a part of what we do,” Miller said during a video call this week. “Each year is different. At the end of the day, I think the class will be very a good one, it's just that it's a little heavy toward international.”

Arizona has consistently had top-10 recruiting classes under Miller, except for 2018, when an FBI investigation into shady recruiting practices swirled around the program.

All three freshmen declared early for the NBA, leaving the Wildcats with some big holes to fill.

Arizona filled one in the fall with Dalen Terry, a four-star shooting forward from Phoenix. The Wildcats still had more work to do to replace the freshman trio, along with seniors Chase Jeter, Dylan Smith, Max Hazzard and Stone Gettings out of eligibility.

The shift paid dividends this year with several top U.S. recruits opting to play for other programs or electing to skip college.

The top-rated recruit among Arizona's new international players is Lithuanian 6-foot-9 forward Azuolas Tubelis, who signed along with his twin brother, 6-6 Tautvilas.

Though the class doesn't have one surefire one-and-done player like in years past, the depth and overall talent landed Arizona at No. 5 overall in the 247 Sports composite.

"The one thing about all of our guys that are coming in from the international game, they’ve been battle-tested in FIBA,” Miller said. “They played for their country. They played against some great competition in Europe, they’ve traveled to the United States, almost all of them. And I think they have a good feel for the game, so they’re not going to be a deer in headlights when it comes to college basketball."

The Wildcats also added a pair of transfers in former Georgetown guard James Akinjo and Terrell Brown from Seattle. Brown will be eligible immediately as a grad transfer and Miller is hopeful Akinjo will be granted a waiver to play the entire season instead of just the second semester after he left the Hoyas early last season.

Arizona also is holding out hope that Brandon Williams will be able to return. A 6-3 guard, Williams averaged 11.4 points and 3.4 assists as a freshman in 2018-19 but sat out last season while battling a congenital knee injury.

Miller said the shutdown from the coronavirus pandemic slowed Williams' recovery progress, but reiterated he is still on scholarship at Arizona and will resume his rehab when players are allowed to return to campus, possibly in July.

“You’re talking to him at 19 and you imagine how he’s chomping at the bit just to get back out there,” Miller said. “I think when he reads that he’s not going to play or he’s not going to be as good, or this and that about surgery, like all of us, he wishes he had the answers. He doesn’t completely have them all."