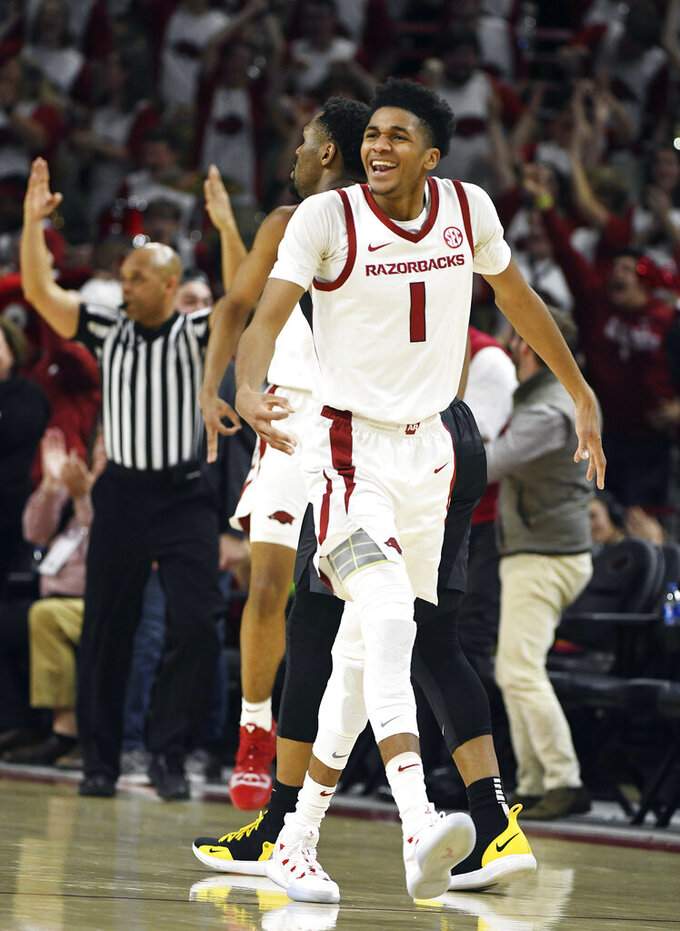 Arkansas guard Isaiah Joe (1) celebrates after hitting a 3-point shot against Missouri during the second half of an NCAA college basketball game, Wednesday, Jan. 23, 2019, in Fayetteville, Ark. (AP Photo/Michael Woods) 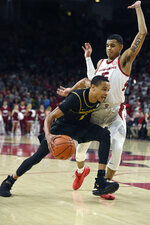 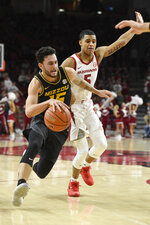 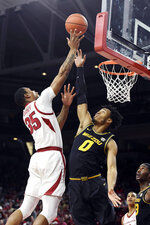 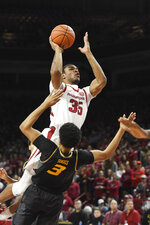 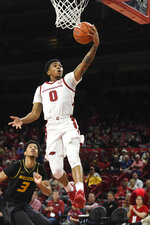 FAYETTEVILLE, Ark. (AP) — Less than nine minutes into Wednesday's Southeastern Conference home game, Arkansas found itself on the short end of a 17-4 score against Missouri.

The Razorbacks were 1-of-12 from the floor, sophomore Daniel Gafford had taken just one shot and Arkansas had almost as many turnovers (three) as points.

So Anderson decided to shake things up by going with a four-guard lineup. The switch proved to be just the spark the Razorbacks needed as Arkansas recovered for a 72-60 win in Bud Walton Arena.

"We knew once we put the guards out there, they would not be able to keep up with our speed," said Arkansas freshman Isaiah Joe, who scored a game-high 23 points in the win. "And Daniel is one of the best bigs in the country running the floor, so we had the advantage."

Joe knocked down seven 3-pointers and fueled a late second-half run that turned a close game into a runaway.

"We knew that Mike's team was going to fight, we knew they would play hard," Missouri coach Cuonzo Martin said. "When they went with that four-guard lineup they were able to force some turnovers and they feed off of that."

"That's Hog basketball," Joe said. "Speed them up, force turnovers and get points off of it."

The loss was the fourth in the last five games for Missouri (10-7, 1-4) which seized control early in the first half and raced to a 14-2 lead on a layup by Jordan Geist eight minutes in. Arkansas opened the game by going 1 of 12 from the floor and went more than six minutes without a point early in the half.

Jeremiah Tilmon scored seven of his nine first-half points in the first eight minutes to help the Tigers grab the early momentum.

Desi Sills finally got Arkansas going, getting a transition bucket off a turnover and the Razorbacks slowly whittled away at Missouri's lead.

Gafford scored inside and Reggie Chaney added back-to-back buckets to pull Arkansas within 26-20 with 4:11 left before halftime.

Arkansas took its first lead of the game with an 8-0 run with under three minutes left in the half. Sills hit a pair of free throws, then Joe and Keyshawn Embery-Simpson knocked down back-to-back 3-pointers for a 30-29 Razorbacks lead with 2:10 left.

Xavier Pinson drained a 3-pointer with 36 seconds left, but Gafford, who scored 13 points, threw up a shot as he was falling down which went well above the backboard then down through the net as the buzzer sounded, cutting Missouri's lead to 34-32.

"I knew time was running down and there was at least two seconds left," Gafford said of his shot. "I just threw it up. I was trying to hit the backboard, but it just went straight in. I was amazed. I thought I was going to air-ball it."

Mark Smith led Missouri with 22 points, the only Tiger in double-figures.

For Arkansas, the win ended a tough stretch that saw the Razorbacks get blown out in back-to-back 19-point road losses to No. 1 Tennessee and No. 20 Ole Miss. Missouri, which was coming off a 20-point win against Texas A&M, has a pair of tough games coming up against LSU and Auburn.

"I was straying from the path of being a dog on the court," said Gafford, who had four offensive rebounds among his 10 for the game. "I didn't like the way I've been playing, so I just had to get my mindset back to being a beast out there."

Chaney and Sills provided a big spark off the bench for Arkansas. Chaney had six points and six rebounds in 23 minutes, and Sills added eight points in 20 minutes. . After the horrid start from the floor, Arkansas ended the game shooting 44 percent. . Arkansas started last season 2-4 in the SEC as well. . The four-game losing streak was the longest in Anderson's eight seasons at Arkansas.

The Tigers had just nine assists and two steals.

Missouri: The Tigers will host LSU on Saturday. Tipoff is set for 5 p.m. on the SEC Network.

Arkansas: The Razorbacks step out of SEC play in Lubbock against Texas Tech. Tipoff in the Big 12/SEC Challenge game is set for 5 p.m.