Arkansas rallies, then holds on to beat Auburn 75-73 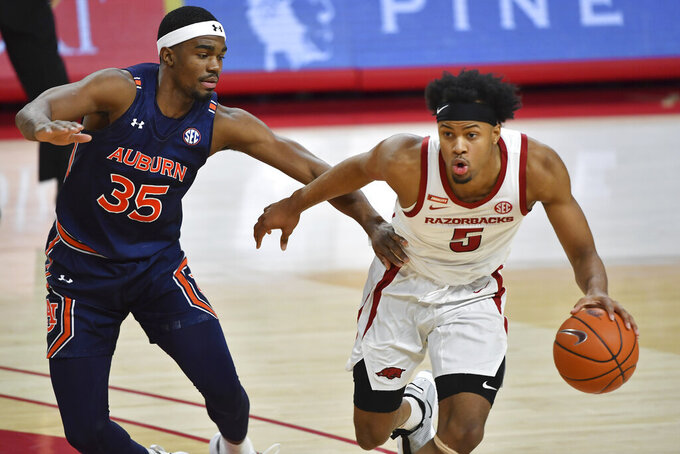 Arkansas guard Moses Moody (5) tries to get past Auburn defender Devan Cambridge (35) during the first half of an NCAA college basketball game Wednesday, Jan. 20, 2021, in Fayetteville, Ark. (AP Photo/Michael Woods) 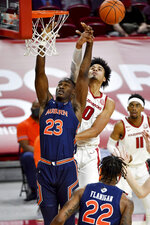 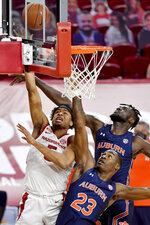 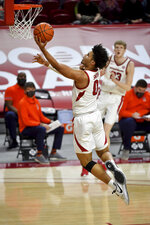 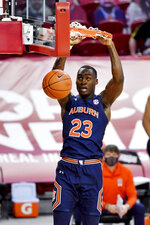 FAYETTEVILLE, Ark. (AP) — Desi Sills scored 14 of his 22 points in the second half to help Arkansas rally from a 12-point halftime deficit, and then hold on to beat Auburn 75-73 on Wednesday night.

Sills scored four straight points during an 18-10 run to give Arkansas a 74-66 lead, its largest of the game coming with 2:40 to play. The Razorbacks trailed the entire first half and by 10 points early in the second.

Auburn's Sharife Cooper answered with consecutive layups as part of a 7-0 surge that pulled the Tigers to 74-73 with 1:03 remaining. Moses Moody added a free throw for Arkansas with two seconds left and Allen Flanigan missed a 3-pointer to end it.

Sills was 7-of-12 shooting and made 8 of 10 free throws. Jalen Tate added 14 points for Arkansas (11-4, 3-4 Southeastern Conference). Justin Smith and Davonte Davis had 10 points apiece. Smith's dunk stretched the Razorbacks' lead to 62-56 with about seven minutes left.

Moody, a freshman who is one of four players in the SEC ranked among the top 15 in scoring and rebounding, was held to five points on 2-of-9 shooting and had five rebounds.

Cooper scored 25 points for Auburn (8-7, 2-5). JT Thor had 12 points. Flanigan, who had reached double figures in 10 of the last 11 games, had just seven points against the Razorbacks.