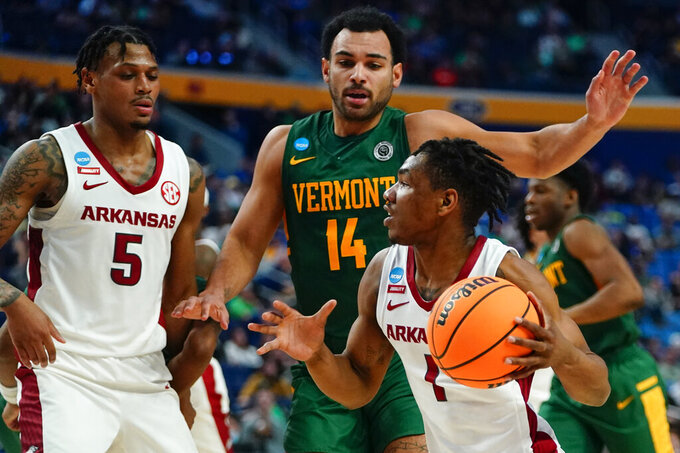 Arkansas guard JD Notae (1) drives against Vermont forward Isaiah Powell (14) during the second half of a college basketball game in the first round of the NCAA men's tournament Thursday, March 17, 2022, in Buffalo, N.Y. (AP Photo/Frank Franklin II)

Arkansas guard JD Notae has a well-earned reputation as a big-time performer.

He also can be maddeningly inconsistent.

During Southeastern Conference play, the fifth-year senior exploded for 30 points against Kentucky and 28 against Auburn in huge wins over top 10 teams that helped the Razorbacks earn a No. 4 seed in the NCAA Tournament. He’s a first-team All-SEC performer who averages more than 18 points per game.

In two NCAA Tournament games, Notae has scored at his usual rate, but he has been harassed into 10-for-34 shooting from the field and 2-for-10 shooting from 3-point range. Still, the 6-foot-2 guard has used timely offensive production and strong defense to help the Razorbacks advance. Arkansas will face top seed and top-ranked Gonzaga on Thursday in a West Region semifinal.

“He is the head of the snake,” Jans said. “He can score in a variety of ways, all three levels. ... Got great range. He can shoot it off the catch, off the bounce. He can get in the paint, create for himself, create for others. He is strong enough, skilled enough to get to the line, which he does often. He is just a really hard guard. I don’t think he is the kind of guy you’re going to shut down.”

Sometimes, he shuts himself down. In the first half of Arkansas' tournament-opening win against Vermont, Notae committed two fouls in the first half and went to the bench. He went 0-for-4 from the field and did not score before the break.

Arkansas coach Eric Musselman always sits players when they pick up two fouls in the first half. And Notae usually responds after the break.

“I don’t think two fouls affects him,” Musselman said. “I mean, I think he is sitting there going, ‘Coach, why am I not playing? I only have two. I’m allowed five.’ He doesn’t understand that we still have 35 minutes to play or whatever.”

Musselman reminded Notae at halftime that he still was the go-to player.

“We’re going to sink and swim with your performance in the last 20 minutes,” Musselman told him.

Notae responded with 17 points in the second half, including two critical free throws with nine seconds remaining.

“I don’t think we win that game without him stepping up,” said guard Stanley Umude, who led the Razorbacks with 21 points against Vermont. “He knows that. We put a lot of trust in him in those situations, and he handles the pressure well.”

Overall, Notae shot 5-for-16 overall and 1-for-7 from 3-point range. He only played 27 minutes because of the foul situation. In the second-round win over New Mexico State, Notae scored 18 points and had eight steals, but he shot just 5-for-18 and had six turnovers before fouling out.

He will likely need to shoot better and avoid foul trouble if the Razorbacks are to have a chance against Gonzaga.

“He is a scorer,” Arkansas forward Trey Wade said a day after the Vermont win. “We expect that from him every game, and we just -- we do our best to get him good looks. He struggled with fouling early, and I challenge him all the time to kind of fall away from that, but he is our scorer, and we expect that out of him.”