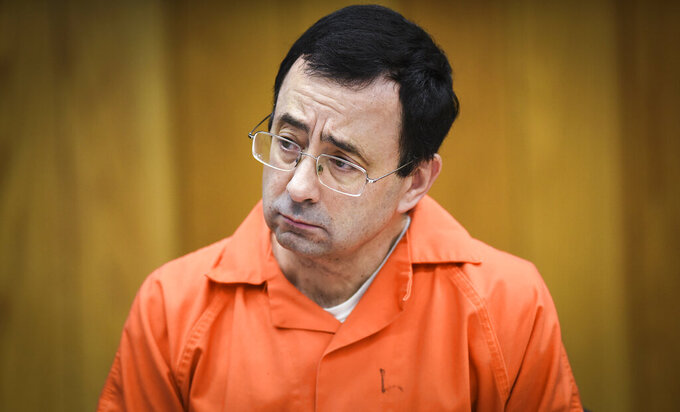 FILE - In this Feb. 2, 2018, file photo, Larry Nassar listens as Melissa Alexander Vigogne gives her victim statement in Eaton County Circuit Court in Charlotte, Mich. Fifty-one women are suing the U.S. Olympic Committee, its board members and a number of former high-ranking officials for failing to prevent their abuse at the hands of imprisoned sports doctor Larry Nassar. The lawsuit, filed Tuesday, March 12, 2019, in federal court in Denver, details abuse dating to the late 1990s. (Matthew Dae Smith/Lansing State Journal via AP, File)

DETROIT (AP) — John Engler's front-row interest in Michigan State University basketball has led to a war of words over the former school president's availability to speak to investigators about the Larry Nassar scandal .

Things have become so nasty that Engler's attorney has advised him not to cooperate if state Assistant Attorney General Christina Grossi remains on the case.

The attorney general's office wants to talk to Engler about campus changes after the sexual-assault scandal involving Nassar, a sports doctor, an interview that could take less than an hour. Engler was interim president for about a year until Jan. 17.

Grossi said Engler was scheduled to be interviewed March 28 in Washington, where he works, because he didn't plan to be in Michigan earlier. But she suddenly scratched that date this week. Grossi was upset to learn that the former Michigan governor was in a courtside seat at a MSU basketball game on March 9.

She suggested Engler could have carved out time to meet in Michigan long before March 28.

"Your client's brazen disregard for this investigation and his willingness to lie about his whereabouts is not only appalling but does a terrible disservice to the university," Grossi told attorney Seth Waxman in an email Tuesday.

"As an alumna of Michigan State, I'm embarrassed that our university's former president can make time to attend basketball games but not to sit to discuss the largest sexual assault scandal in the history of higher education," Grossi wrote.

In response, Waxman said he never indicated that Engler was unwilling to travel to Michigan. The lawyer said he was unavailable during the week of March 4, not Engler.

Waxman told Grossi that he's advising Engler to decline to speak to investigators unless she is dropped from the Nassar investigation. He accused her of "unfounded attacks" and said her "biases and prejudices" are unethical.

"The fact that the underlying conduct involved unspeakable harms," Waxman said of Nassar's assaults, "does not give the attorney general's office and its agents the right to attack, manipulate and deceive innocent people, including Mr. Engler."

Separately, Attorney General Dana Nessel asked the head of MSU's governing board to demand that Engler cooperate, under terms of his contract. She also wants the university to release more than 6,000 documents related to Nassar.