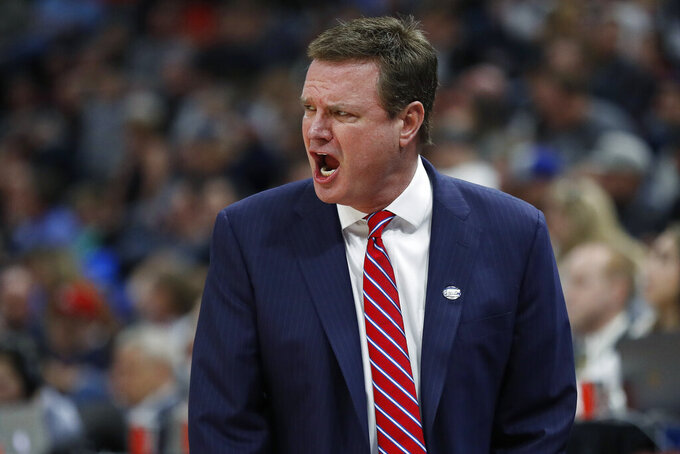 Kansas coach Bill Self reacts during the first half of the team's second-round game against Auburn in the NCAA men's college basketball tournament Saturday, March 23, 2019, in Salt Lake City. (AP Photo/Jeff Swinger) 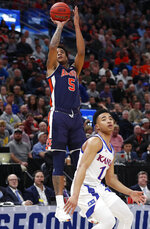 SALT LAKE CITY (AP) — Bruce Pearl and Auburn made another unexpected leap in its rebuilding process Saturday night, putting on a dazzling offensive display to take down a college basketball blue blood.

A year after an unexpected SEC title and one NCAA Tournament game victory, the Tigers are headed to the Sweet 16 for the first time in 16 years.

Poised under college basketball's brightest spotlight, Auburn ran over Kansas 89-75 in the Midwest Region to earn one of the biggest wins in program history.

Auburn (28-9) had to overcome late-game blunders to hold off New Mexico State in its NCAA Tournament opener. The fifth-seeded Tigers had no such trouble against Kansas, pouncing on the undermanned Jayhawks and not letting them up.

Auburn had a 17-point lead before the midpoint of the first half and kept pouring in shots, hitting 13 3-pointers while shooting 53 percent against one of the college basketball's premier programs.

Bryce Brown scored 25 points and hit seven 3-pointers, and Jared Harper had 18 points to send Auburn to the Sweet 16 for the fourth time — first since 2003 under Cliff Ellis.

Next up: top-seeded North Carolina or No. 9 Washington in Kansas City.

The Jayhawks (26-10) hoped they would get the ticket to KC, where they would essentially play Sweet 16 home games as the No. 4 seed. Bill Self's bunch got gut punched early and never climbed off the canvas, bounced from the NCAA Tournament in the second round after reaching the Final Four a year ago.

Dedric Lawson had 25 points and 10 rebounds in what could be his final game in KU red and blue.

"We hadn't seen an onslaught like that all year, the first 10 minutes of the game," Self said. "They rattled us and we didn't respond very well."

Kansas fought through a tumultuous season and its first non-Big 12 title in 14 years by rolling over Northeastern in its NCAA Tournament opener.

The Jayhawks' second game figured to be all about ball control.

Auburn is one of the nation's best at creating turnovers and Kansas is one of the worst at coughing them up. Advantage on paper, advantage on the court; Auburn had three steals in the first four minutes.

A bigger problem for Kansas was the Tigers ran their offense like a Formula One car. Whipping quick passes around to set up open shots, Auburn made six of its first eight 3-pointers to race out to a 17-point lead in the opening eight minutes.

"The whole game plan was getting out on the shooters and we did a poor job," Lawson said. "We let those guys get comfortable and that's what led to the big deficit in the first half."

The Jayhawks found an offensive rhythm to open the second half, making their first seven shots.

They made up one point.

Auburn hit seven of its first eight shots and kept the steamrolling going with a series of dunks and transition layups.

A tough season ended with a thud for Kansas. The Jayhawks didn't have the manpower to match the Tigers and were bounced from the bracket early after reaching at least the Elite Eight the previous three seasons.

Auburn made a huge statement on college basketball's biggest stage with an impressive offensive performance.

Brown and Harper were the catalysts in Auburn's early onslaught. The 5-foot-11 Harper brought to its feet with a transition dunk and Brown made his first five 3-pointers as the Tigers raced out to the lead.

"Seeing him (Brown) get hot early on, it really helped us get a boost and kill their confidence a little bit," Auburn's Anfernee McLemore said.

Auburn plays North Carolina or Washington in the Sweet 16 Thursday in Kansas City.