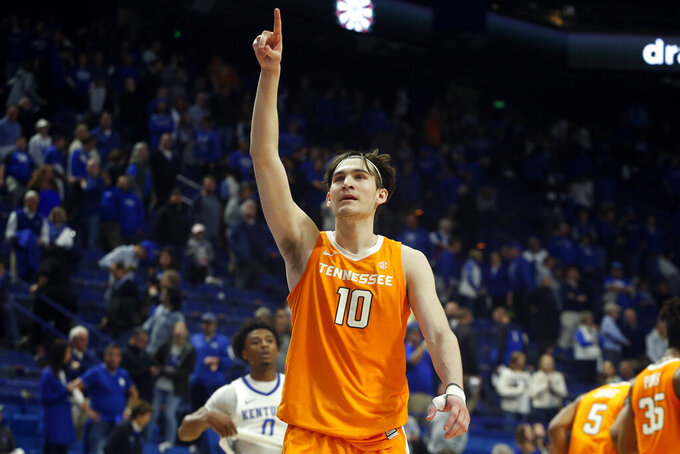 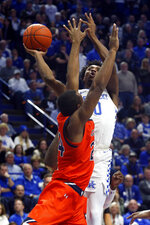 NASHVILLE, Tenn. (AP) — Auburn coach Bruce Pearl believes with the parity in the Southeastern Conference that a handful of teams could do the same thing his Tigers did in last year's league tournament and run the table.

An SEC team can lock up an automatic NCAA Tournament berth by winning four games in as many days in Nashville, Tennessee when the tourney begins Wednesday. Auburn did it last year en route to the first Final Four berth in school history.

Pearl said it could happen again with a wide-open field.

“We were a five seed that was able to cut nets, so it certainly can happen," Pearl said. "I think this year, with the exception of Kentucky being, I think, superior to the rest of the teams in the league, I think everybody else has got a pretty good shot.”

No. 20 Auburn won't have to repeat that feat having gone from the fifth seed in 2019 to No. 2 this year with a double-bye. Eighth-ranked Kentucky with its 49th regular-season title is the SEC's top seed yet again with the Wildcats (25-6) looking for a 32nd tournament title overall and fifth in six years.

One key to surviving four games in four days is timing. Tennessee lost to Auburn in the title game last year after playing the last of four quarterfinals. Auburn started its title run playing in the second game on Thursday before routing the Vols to win the tournament, becoming the first SEC team to win this event twice with four wins in four days. That was only the fifth such run in this event's history.

“I remember Bruce told me last year that he felt it was a big advantage that they got to play early and had longer to rest,” said Tennessee coach Rick Barnes, whose eighth-seeded Vols open Thursday playing No. 9 seed Alabama.

Winning five games in five days is obviously an even greater challenge, but even No. 14 seed Vanderbilt has some hope having won two straight with an upset of then-No. 18 LSU on Feb. 5. The Commodores open Wednesday night against No. 11 seed Arkansas with No. 12 seed Mississippi and 13th-seeded Georgia first up at Bridgestone Arena.

“I wouldn’t be surprised if Vanderbilt is playing with the confidence and the unity it takes to have a run like that,” South Carolina coach Frank Martin said.

LSU coach Will Wade was suspended for this event last year despite guiding the Tigers to the No. 1 seed. He also missed the NCAA Tournament after refusing to speak with school officials about allegations over recruiting issues before being reinstated in mid-April. Now his Tigers are the No. 3 seed.

But LSU has lost five straight at this event and hasn't won its tournament opener in 2014. Since the tournament resumed in 1979, nobody has a worse winning percentage than LSU at 39.4% (26-40).

“Hopefully, I'll get a chance to enjoy it,” Wade said.

Some other things to know about the SEC Tournament:

Kentucky coach John Calipari said Monday he hadn't talked yet with Ashton Hagans but expects the sophomore point guard will be available during the tournament. Hagans didn't travel with Kentucky to Florida for the regular-season finale, and Calipari said Hagans may not start this week wanting him healthy and in a “great frame of mind.”

Florida could be without its second-leading scorer and top rebounder. Forward Kerry Blackshear Jr. sprained his left wrist during the Gators' loss to Kentucky last weekend with X-rays negative and an MRI exam showed a sprained ligament.

Georgia will be without one of coach Tom Crean's three seniors with Tyree Crump diagnosed with mononeucleosis late last week.

Chances are good that someone will put on a show in this tournament with SEC players scoring 30 or more 37 times this season, easily topping the 30 in 2009. Mason Jones of Arkansas is among three players in the country to score at least 40 twice this season as the SEC's leading scorer. Saben Lee scored a career-high 38 helping Vanderbilt win at Alabama last week.

The SEC has work to get more than four teams into this year's NCAA Tournament after seven earned berths in 2019 with a league-record eight in 2018. Fourth-seeded Mississippi State (20-11, 11-7) may have to get to the final to make it five SEC teams.

The SEC is busy monitoring the new coronavirus, which in most people causes only mild or moderate symptoms, such as fever and cough. For some, especially older adults and people with existing health problems, it can cause more severe illness, including pneumonia.

Like the women's tournament last week, the SEC will add more hand sanitizers at entrances and throughout the arena while using hospital-grade disinfectant to clean locker rooms, game balls, team benches.