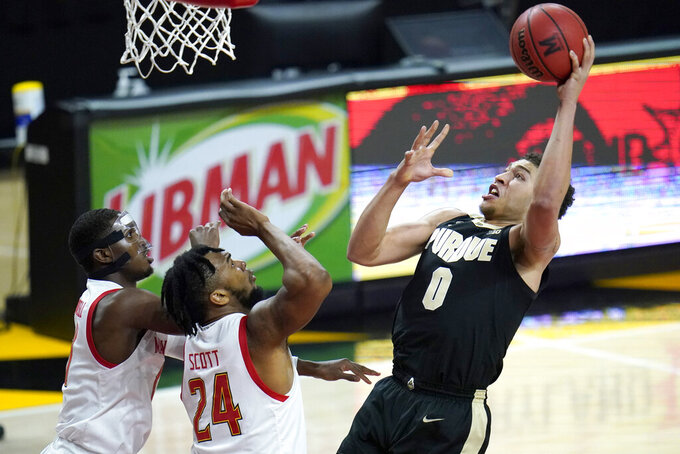 Purdue forward Mason Gillis (0) goes up for a shot against Maryland forward Donta Scott (24) and guard Darryl Morsell during the first half of an NCAA college basketball game, Tuesday, Feb. 2, 2021, in College Park. (AP Photo/Julio Cortez) 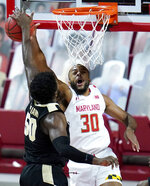 COLLEGE PARK, Md. (AP) — Purdue appeared well on its way to justifying its position in the Top 25 when suddenly, almost nothing went right.

Shots bounced off the rim, turnovers mounted and the key rebounds went to Maryland. And just like that, the No. 24 Boilermakers absorbed a cringe-worthy defeat and that could cost them their place in the AP poll.

Eric Ayala made two free throws with three seconds left, and the Terrapins scored the final six points to rally for a 61-60 victory Tuesday night.

Then, while the Boilermakers repeatedly failed to increase the margin, Maryland guard Darryl Morsell drilled a 3-pointer and Ayala finished up with three free throws. Ayala made 1 of 2 at the line with 48 seconds to go and hit the final two after missing a layup, collecting his own rebound and getting fouled by Jaden Ivey.

Purdue then committed a turnover before attempting a final shot.

“If we would have gotten a couple stops down the stretch, we would have won," Ivey lamented. “It’s tough, but we’ll get back in the gym, keep working as a team and hopefully bounce back next game."

Ivey's misfire with 23 seconds remaining opened the door for the Terrapins, who were 0-4 at home in the Big Ten before pulling this one out.

“It was a great win," said Aaron Wiggins, who had 18 points and 11 rebounds. “We knew what we had to do to get the job done today, and we were tough enough to do the little things."

“We had a lot of open looks in the first half,” Wiggins said. “Our mindset was to stay confident. We knew the shots would fall."

Trevion Williams had 23 points and 11 rebounds for the Boilermakers, whose three-game road winning streak ended.

“Honestly, some stuff just didn’t go our way," guard Isaiah Thompson said. “Credit Maryland for that. They hung in there and made some big-time shots."

The Boilermakers built a 36-30 lead before successive 3-pointers by Ayala and Wiggins tied the game for the ninth time. After Williams popped a jumper, Wiggins drilled a lengthy 3 to give Maryland its first lead since 9-8.

Purdue's visit to the Top 25 could be a brief one. Losing on the road in the Big Ten is usually acceptable — except when it comes in this fashion against a team hovering around the .500 mark.

Purdue: The Boilermakers thought they had finally turned the corner and reached a level of consistency. Evidently not.

Maryland: This solid effort, along with a forgiving schedule over the final month, gives the Terrapins hope of making a late rush heading into the Big Ten Tournament. The only ranked team left on Maryland's schedule is Ohio State at home.

The Boilermakers were without guard Sasha Stefanovic, who missed a second straight game following a positive test for COVID-19. Stefanovic is Purdue's second-leading scorer and the Big Ten’s leading three-point shooter by percentage (45.6).

Purdue: The Boilermakers hope to have Stefanovic back for Saturday's home game against Northwestern, which remains winless in 2021 (0-8).

Maryland: The Terps visit Penn State on Friday night, the first of two meetings between the schools.