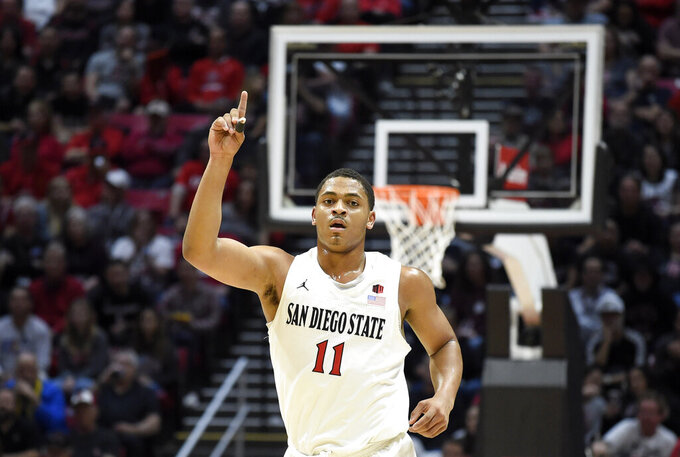 FILE - In this Feb. 25, 2020 file photo, San Diego State forward Matt Mitchell (11) points skyward during the first half of an NCAA college basketball game against Colorado State in San Diego. San Diego State was three days away from finding out whether it would be a No. 1 or 2 seed in the NCAA Tournament when March Madness was canceled because of the coronavirus pandemic. Their season ended before they could find out how truly historic it could have been. They finished 30-2, ranked No. 6 and with a Mountain West Conference regular-season championship banner hanging in Viejas Arena. (AP Photo/Denis Poroy, File)

SAN DIEGO (AP) — San Diego State was three days away from finding out whether it would be a No. 1 or 2 seed in the NCAA Tournament — its best ever — when March Madness was canceled because of the coronavirus pandemic.

The Aztecs' season ended before they could find out how truly historic it could have been. They finished 30-2, ranked No. 6 and with a Mountain West Conference regular-season championship banner hanging in Viejas Arena.

The disappointment has turned to motivation for coach Brian Dutcher’s Aztecs, who enter this season unranked, just like they did last year.

“Other than that, we’ve put that behind us. We’re focused on this season. We want to get out and try to see if we can play really good basketball again this year,” said Dutcher, who’s entering his fourth season.

“I’ve let all that disappointment go by now,” said senior forward Matt Mitchell, a preseason All-MWC pick. “I do take that motivation that we were in contention. You definitely take that as motivation to go into this year and to take it to all these teams that we have to play again, just knowing that we had the ability to be there and we had the capability and hopefully the opportunity to be there again this year."

The Aztecs get a big test in their season opener, a rare visit by No. 22 UCLA on Nov. 25 as part of a multiteam event at Viejas Arena.

“I love our experience. We’ve got talent, we’ve got depth and now we have to see if we can play like a team at both ends of the floor,” Dutcher said. “That’s always been the trademark at San Diego State, playing at both ends, obviously the defense setting the tone and then playing unselfish basketball at the offensive end.”

Mitchell averaged 12.2 points and 4.8 rebounds, Schakel 10 points and Mensah 6.9 points and 6.8 rebounds in 13 games before missing the rest of the season with an injury.

SDSU has a history of bringing in grad transfers who have played well.

”Most of these kids come because they want to win at a high level,” Dutcher said. “As long as winning’s the most important thing to them, then they fit in our program. The players we’ve had coming into our program have all sacrificed for the good of the team. I have no question that Terrell Gomez and Joshua Tomaic will fit that mold."

He had 22 blocked shots in the first 13 games before missing the rest of the season with what the school called a respiratory ailment. “Nathan is a difference-maker,” Dutcher said. “He’s a full go in practices, looks good and is improving. I think he will anchor our defense. He gives us a shot-blocking ability that you need to be a good defensive team.”

The Aztecs will have to get used to playing without the raucous crowd that has given them one of the country’s best home-court advantages.

“It’s going to be a different dynamic,” Dutcher said. “Obviously our fans have won us games at Viejas. If we get down they never quit on us. They stay in the game and create energy for us at times. It’s going to be a year like no other, and that’s going to be everywhere we play. We’ll go to some places where they may have a certain percentage of the stands filled but we’ll bring our own energy.”

UCLA will play SDSU on the Aztecs’ home floor for the first time since the 1991-92 season. “It’s going to be a great opportunity for us. Mick Cronin and I have been long-time friends. And I’m appreciative he’s bringing the Bruins down here to play in our event along with Pepperdine and UCI,” Dutcher said.

SDSU will also play Arizona State, BYU and is finalizing a contract with Saint Mary’s. “We’re going to be challenged in our nonconference schedule but that’s a good thing in these COVID times, that we may not have as many games but the games we’ve decided to play are all high-quality games,” Dutcher said.