Azubuike leading No. 1 Kansas back on top of college hoops 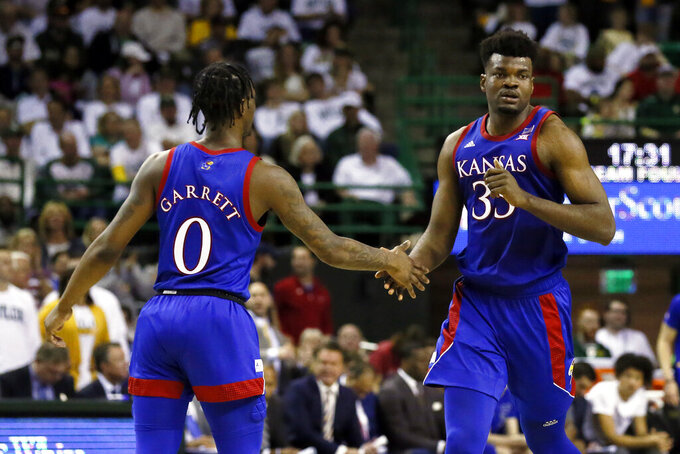 Kansas center Udoka Azubuike, right, low fives guard Marcus Garrett, left, after a made basket against Baylor during the second half of an NCAA college basketball game on Saturday, Feb. 22, 2020, in Waco, Texas. (AP Photo/Ray Carlin) 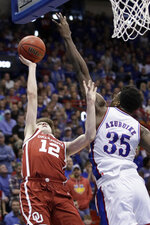 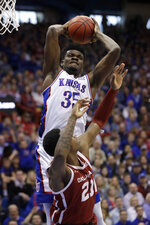 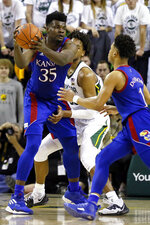 LAWRENCE, Kan. (AP) — Oklahoma State coach Mike Boynton had just finished watching Udoka Azubuike bully his way to 19 points and 16 rebounds against his over-matched Cowboys when he pulled the 7-footer aside and pointed to the rafters in Allen Fieldhouse.

“Keep it up,” Boynton whispered into the ear of the Kansas center, “and your name will be up there, too.”

There are certain requirements for a player to have his jersey raised above the south seats in the old field house, among them becoming an All-American or winning the Big 12's player of the year award. It's not an honor that the Jayhawks bestow on just anyone.

The way Azubuike has been playing lately, it won't be long before his No. 35 joins the jerseys of the great Wilt Chamberlain, Clyde Lovellette, Jo Jo White and Danny Manning hanging from the ceiling.

“I don't watch a whole lot of national basketball,” Boynton said later, “but I'd be hard-pressed to find a better national player of the year candidate than he is. The way he's playing now is pretty special. Obviously there's a special kind of fan base here and they appreciate it, but I don't know if people appreciate him nationally.”

Azubuike has certainly opened some eyes over the last month.

His run began with 17 points and 12 rebounds against Texas, then continued with 20 points and 15 boards at TCU. Azubuike had another double-double against Oklahoma, then had 23 points and 19 rebounds last Saturday as the Jayhawks (25-3, 13-1) beat then-No. 1 Baylor on the road to regain the top spot in the nation and forge a tie atop the Big 12 standings.

Along the way, Azubuike reached the 1,000-point mark for his career — a nice benchmark considering he missed much of his first couple seasons to injury. His total of 35 rebounds in the past two games are the most since Thomas Robinson had that many during the 2011-12 season, and his 42 points and 35 rebounds allowed him to join Robinson, Dedric Lawson, Wayne Simien and Drew Gooden as the only players with at 40 or more points and 30 or more rebounds in a two-game span.

Azubuike has also been able to steer clear of foul trouble. His conditioning has improved to the point that he can easily play more than 30 minutes per game. And his defense has been unparalleled, almost single-handedly shutting down the entire paint.

“We've been trying to tell Doke all along he can dominate a game without getting a lot of touches. If that's the case, he's quickly becoming as good a center or the best defensive center since I've been here, and we've had some good ones,” Kansas coach Bill Self said. “I think people have begun to recognize him for what he brings to the table.”

Azubuike has come a long ways since his childhood in Delta, Nigeria. He was an exceedingly raw prospect coming out of high school, and his only offensive move early on was a dunk. But his game has improved over time to where he is a more well-rounded player — even his chronically poor foul shooting has reached an acceptable level.

Still, the question remains: Will the bruising big man's game translate to the NBA?

Most mock drafts have the senior center going in the second round, if at all, primarily because teams are wary of drafting a prototypical center the way the game has evolved. And whereas Azubuike can dunk his way to big numbers in college, those easy looks at the rim will be much harder to find in the pros, and his mid-range game remains a work in progress.

“If he plays to his athletic ability that's how he'll get paid,” Self said. “He'll never get paid by shooting 15-foot fadeaways or whatever it is. That's not who he is. So, can he guard a ball screen? Can he get to the rim? Can he defend outside his area? If he can do those things he has a chance to make it.”

Most of the names hanging from the rafters in Allen Fieldhouse didn't just put up big numbers or earn a long list of individual accolades. That's not how the truly great ones get remembered at Kansas. They also took their team deep into the NCAA Tournament, and the best of them ushered the Jayhawks to the Final Four and beyond.

Azubuike has been there once, helping Kansas to the national semifinals as a sophomore. Taking his team back to the final weekend of the season would almost certainly cement his legacy among the best to play for the Jayhawks.

“If you look at Doke over the last recent games, you could make a case for it,” Self said. “Hopefully he'll continue on this uptick and keep building on it, and if we win he'll get some mention for player of the year. I'd like all our guys to be in the game for all the postseason accolades, but we still need to win games to think about any of that.”