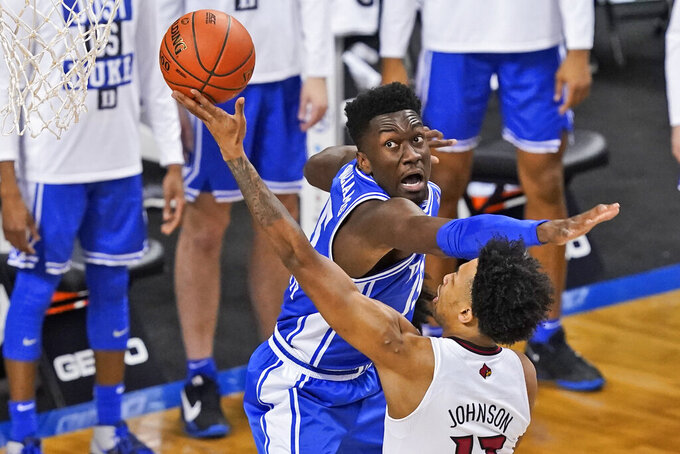 Duke center Mark Williams (15) tries to block the shot of Louisville guard David Johnson (13) during the first half of an NCAA college basketball game in the second round of the Atlantic Coast Conference tournament in Greensboro, N.C., Wednesday, March 10, 2021. (AP Photo/Gerry Broome)

LOUISVILLE, Ky. (AP) — Louisville Cardinals coach Chris Mack isn’t holding his breath waiting for the call for his team to replace another unable to play in the NCAA Tournament because of COVID issues.

Mindful that a school simply needs five healthy players to remain eligible for the 68-team field, the third-year coach didn’t see one having a worst-case scenario and pulling out suddenly by the Tuesday night deadline. Although the Cardinals (13-7) are the first alternate to fill an open spot and undergoing testing protocols, Mack and his program are resigned to being on the outside looking in on March Madness and the NIT — which Louisville declined to participate in.

Meanwhile, fellow potential replacement squads Colorado State, Saint Louis and Mississippi are preparing to play in the 16-team NIT that begins Wednesday in the Dallas-Fort Worth area. Like Louisville, CSU has no real thoughts toward claiming a last-minute NCAA berth and just wants to move forward from the sting of being among among the so-called “First Four Out.”

“I don’t know that there’s a manual to doing that,” said coach Niko Medved, whose Rams (18-6) will remain in Las Vegas following the Mountain West Tournament until Wednesday before leaving for Texas. “You just try to be real with them about where you’re at and what’s in front of you.

"Again, as the time keeps going by and you keep starting to look at not what didn’t happen, but start to really focus on the opportunity you have in front of you and how lucky you really are to do that, I think you’ll go and attack it.”

Mack said he and Louisville athletic director Vince Tyra had discussed appearing in the NIT, which the Cardinals last participated just before Mack's hiring in March 2018. When talking about the decision of passing on the NIT, among the factors Mack mentioned included potential health risks for a program that endured two lengthy COVID-related pauses this season, including a 19-day stretch last month during which he tested positive with mild symptoms.

Though if the Cardinals had received an at-large bid to the NCAA Tournament, or receive a last-minute invite to the Big Dance, they'll be heading to Indiana.

Louisville’s second interruption wiped out four late Atlantic Coast Conference contests and left little room for error upon returning. The Cardinals dropped three of their final five games including a second-round ACC Tournament loss to Duke, which ended its season the following day following a positive test within the Blue Devils’ program.

The disappointing defeat effectively quashed Louisville’s hopes for the NCAA appearance it desperately sought just up I-65 in Indianapolis, as opposed to traveling to north Texas, a state where many COVID restrictions have been lifted.

“The health of our team this year just wasn’t very good, even down the stretch,” added Mack, whose players are working out individually in the interim. “We had days where we were practicing with seven and eight players. And when you go on two COVID pauses, lose your captain (Malik Williams to a foot injury), you have guys that are injured, it wasn’t the right decision for this team to play in the end.

“It’s been a long and challenging season for a lot of reasons.”

Louisville likely would have been a No. 1 seed in the NIT along with CSU, Saint Louis and Ole Miss, whose consolation for missing the NCAA are being the teams to beat in the lower-profile yet still prestigious tournament.

Ole Miss (16-11) went 3-0 against Top-25 teams this season, joining top-ranked and NCAA overall No. 1 seed Gonzaga and No. 13 Florida State to have at least three ranked wins without a loss. The Southeastern Conference school heads into its second postseason in three years under Kermit Davis having won eight of 13 games.

Saint Louis (14-6) had won three in a row before losing to eventual Atlantic 10 Conference champion St. Bonaventure. The Billikens will make their 19th NIT appearance, the Rams their 10th and first since 2017.

Granted, these schools will play on a much smaller stage compared to the Big Dance they dreamed of. But they're still playing in a season that was no lock to start with.

CSU forward Adam Thistlewood believes his team will be able to turn the NCAA snub into extra motivation and added that they’re “super excited to get back out there and prove to a lot of people that we deserve to play not only in the NIT, but that we should’ve been in the tournament.”