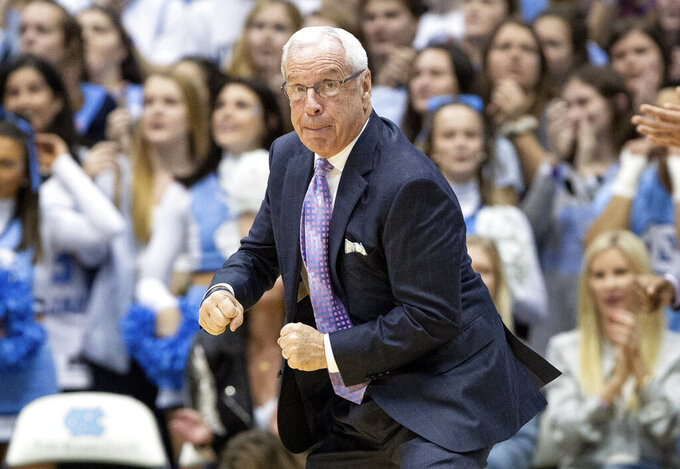 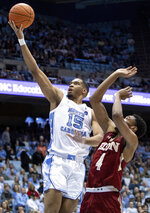 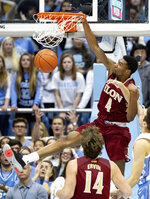 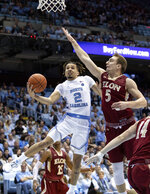 CHAPEL HILL, N.C. (AP) — Those newcomers at No. 5 North Carolina were playing like freshmen — and, really, the upperclassmen were too — during yet another sluggish start.

The big men took it upon themselves to demand the ball — and dominate down low.

Bacot said coach Roy Williams “talked to me and Garrison and was like, ‘We need to dominate in the paint.’”

“So we just told all the guards to get the ball and feed us,” Bacot added.

As a result, fellow freshman Cole Anthony flirted with North Carolina’s first triple-double in 19 years. He finished with nine points, 10 rebounds and a season-high eight assists for North Carolina (4-0), which hasn’t had a player with a triple-double since Brendan Haywood and Jason Capel each did it 10 days apart in December 2000.

And yet, in a sign of how high Anthony’s ceiling is, Williams called it a bad night for his star guard, who was 4 of 14 from the field with four turnovers.

“I’ve seen some really good players, and he’s got a chance to be one of the best I’ve ever seen,” Williams said. “But I also know when good players stink and that was him about half the game.”

The Tar Heels were 30½-point favorites who a year ago beat Elon on the road by 49 points. They trailed at halftime for the second time this season before opening the second half with a Bacot-led 21-5 run that pushed the lead into double figures, and wound up outrebounding Elon 56-25.

Marcus Sheffield scored 19 points for the Phoenix (2-3), who lost their third straight — all to power-conference schools — while shooting 28% in the second half. Hunter Woods added 18 and his 3-pointer with 2½ minutes left pulled Elon to 68-61. Bacot — who had 18 points in the second half — followed with two buckets to re-establish the Tar Heels’ double-figure lead.

Elon: The Phoenix looked nothing like a team still chasing its first Division I victory of the season. Elon led 33-32 at halftime despite missing 13 of its final 15 shots of the first half — many of them wide-open looks — and the signature highlight might have been Sheffield’s posterizing, one-handed dunk on Justin Pierce midway through the half. Plenty of encouraging things in this one for first-year coach Mike Schrage — a former member of Mike Krzyzewski’s staff at Duke who was quite comfortable in the Smith Center’s visitors’ locker room.

“The first 20 minutes, we’ll take, but I thought the start of the second half, they really imposed their will,” Schrage said. “I thought we got worn down trying to fight them.”

North Carolina: The Tar Heels’ youth and inexperience was evident early in this one — Williams, a noted time-out hoarder, burned one 2 minutes, 9 seconds in after a particularly sloppy turnover. (“Earliest one in my history, I’m sure,” he quipped. “Doesn’t have a lot of competition.”) But they flipped the switch at halftime and took over early in the second half with their freshman big man leading the way, then made enough plays to ride out the victory.

This was by far Bacot’s best night of his young career. He set scoring and rebounding highs for the second straight game after finishing with 12 points and 11 rebounds against Gardner-Webb last Friday night. He also had three blocks, his first game with more than one.

With Bacot and Brooks underneath, North Carolina scored 46 points in the paint to just 16 for Elon. That helped the Tar Heels overcome 16% shooting from 3-point range — their worst at the Smith Center since Louisville held them to 14% in January.