Bacot has 28 points, 18 boards as UNC rolls past NC State 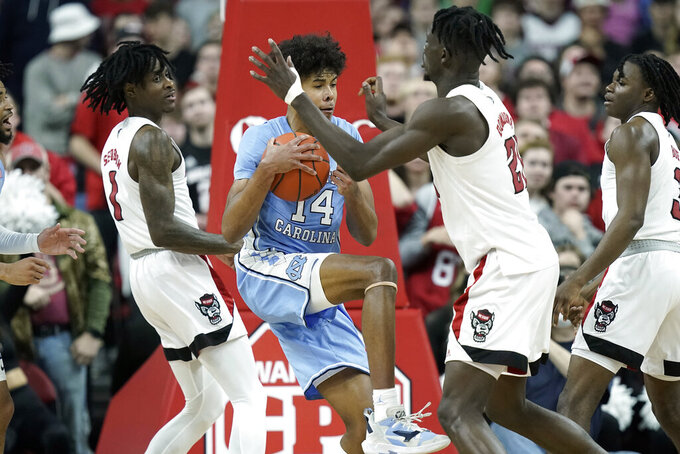 RALEIGH, N.C. (AP) — Armando Bacot scored 28 points and grabbed 18 rebounds for his 22nd double-double this season to lead North Carolina to an 84-74 victory over North Carolina State on Saturday.

Bacot was 11-of-13 shooting and blocked five shots for the Tar Heels (21-8, 13-5 Atlantic Coast Conference), who didn’t leave any doubt against the last-place Wolfpack in a game UNC couldn’t afford to have mar their NCAA Tournament at-large resume.

Brady Manek, Caleb Love and Puff Johnson scored 16 points each. It was a career best for Johnson, who played a season-high 29 minutes after Leaky Black left with a knee injury in the first half.

Bacot scored the first six points in a game-opening 20-3 run. While the Tar Heels were hitting eight of their first 10 shots, NC State opened 1 of 8. The Wolfpack worked their way back to a nine-point deficit with 3:35 left but Manek hit a 3-pointer to begin an 8-0 run and the Tar Heels' lead was still 17 at the break, 46-29. Manek had 14 points and Bacot 11 with 10 rebounds with UNC shooting 50%

NC State scored the first six points of the second half then Bacot scored nine points in an 11-0 run, the lead was 22 and it would stay in double figures with final margin the closest the Wolfpack got in the second half.

Black left late in the first half with what was reported to be a hyperextended knee and was kept on the bench.