'The ball is tipped': Recollections of 'One Shining Moment' 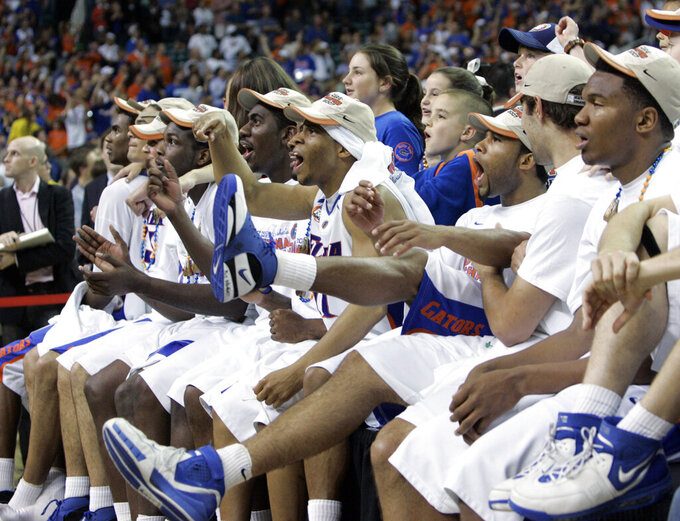 FILE - In this April 2, 2007, file photo, Florida watches the "One Shining Moment" video after winning the title game against Ohio State in the NCAA Final Four basketball championship in Atlanta. Florida won 84-75. Nearly everyone involved in the men’s college basketball tournament, it seems, cherishes a “One Shining Moment” memory. (AP Photo/Mark Humphrey, File)

Nearly everyone involved in the men’s college basketball tournament, it seems, cherishes a “One Shining Moment” memory.

For Gonzaga forward Corey Kispert, what sticks out is watching the three-minute reel on TV as a high schooler after seeing a buzzer-beater lift Villanova to the 2016 NCAA title.

Usually filled with big 3-pointers — like the one Kispert's teammate Jalen Suggs banked in at the end of overtime to beat UCLA in the Final Four — and rim-rattling dunks, hugs and hand slaps, celebrations on court and in locker rooms, tears on the sidelines and in the stands, the video was set to make its return to March Madness on Monday night after unbeaten Gonzaga vs. Baylor for the championship.

Twelve months ago, there was no “One Shining Moment,” or tournament at all, because of the coronavirus pandemic.

The Associated Press asked players and coaches participating in this tournament — along with the man responsible for the famous ditty — about a phenomenon that’s been around for more than 30 years.

Baylor coach Scott Drew calls the video “one of the things you grow up on.”

His younger brother, Grand Canyon coach Bryce Drew, talks about sneaking out of his room to check out past-bedtime title games and the highlights that followed.

AND THERE YOU ARE

Scott Drew was an assistant to his father with Valparaiso in 1998 when Bryce earned a couple of cameos in that year’s tournament-closing video by hitting “The Shot” for the Crusaders against Ole Miss.

Now that they’re both head coaches themselves, they use the edited-to-match-the-lyrics recaps to motivate their players.

Does Bryce Drew show his team his own claim to “Shining” fame?

“No,” he said with a smile. “If it didn’t happen five minutes ago on Twitter, they could care less.”

YOU’RE RUNNING FOR YOUR LIFE

Try asking the man who authored the title song, David Barrett, which version — he sang the first; Teddy Pendergrass, Luther Vandross, Jennifer Hudson, Ne-Yo performed others — is the best, and you'll hear a hearty laugh.

“I don’t know if you have children,” Barrett says over the phone. “Do you have a favorite child?”

Barrett's happy to share some of the history: He wrote it after explaining the poetry of basketball to a waitress at a Michigan bar; it was part of an eight-song recording entitled “Around 2 a.m.” that he describes as “arguably one of the most depressing records ever made”; the opening line was almost “The gun goes off ...”; CBS originally intended to play the song after a Super Bowl.

Instead, it's become a fixture at the end of the men's basketball tourney (ESPN plays a video, with other music, after airing the women's college hoops championship). While millions watch at home, the winners see their “One Shining Moment” at the arena.

Barrett says he ran into Mateen Cleaves at an airport years after the point guard helped Michigan State win the 2000 title.

Cleaves related how in his hometown of Flint, kids played hoops at a church.

“After everyone left, he would sit there and sing ‘One Shining Moment’ and work on his game,” Barrett says. “That was really moving to me.”

Would it matter if Wright appears in Monday's version?

“Of course,” he says. “I mean, that’ll mean a lot if there’s something out there to show my kids some day.”

Or, as Hartford guard Traci Carter explains, making the cut means “you’re solidified as a legend."

AND ALL THE YEARS, NO ONE KNOWS JUST HOW HARD YOU WORKED

West Virginia guard Miles McBride knows Barrett's tune well. He’s heard it countless times — not just with his ears, but between his ears.

“Every kid in the backyard,” McBride says, "dreams of that last shot at the buzzer ... and just hearing that song play over and over in your head.”

BUT NOW IT SHOWS

CBS executive producer Harold Bryant acknowledges the song, written in 1986, “is not the most modern song,” but thinks the key to its appeal is “it elicits these memories and emotions.”

The video is mainly compiled by three people at the network, with snippet suggestions from others, making for a work-in-progress.

“You build it up over the course of the tournament,” Bryant says. “If you tried to wait until the last week, you’d be scrambling.”

“The piccolo player crying the stands (in 2015). That was a shot that sticks out at me,” he says. “Or there’s always a little kid.”

With fewer fans and zero student bands or cheerleaders, he says this year is “a little more of a challenge.”

Still, this sentiment from Shaka Smart, the coach who took VCU to the 2011 Final Four and recently left Texas for Marquette, holds true: "You don’t want the song to end, because when the song ends, the season is over.”

ONE SHINING MOMENT, IT’S ALL ON THE LINE

Back in 1997, Josh Pastner was a freshman on the Arizona team that won the title and, therefore, was central to that year’s wrapup of highs and lows.

Not that Pastner himself played a central role, mind you.

“We don’t need to tell anyone, but I never got in the games,” Georgia Tech’s coach says now. “But I was jumping up and down the sideline, running around like a crazy man there, after we won.”

“If you’re in basketball, and you’re in high school or middle school,” he says, “you grow up to that song."

ONE SHINING MOMENT, THERE FROZEN IN TIME

Sometimes, it's a victory that gets folks their “One Shining Moment.”

Sometimes, it's a loss.

Either way, it can be a thrill to know your team lives on via an oft-watched video.

Purdue guard Eric Hunter Jr. liked seeing the Boilermakers get screen time two years ago thanks to their Sweet 16 win over Tennessee and overtime defeat against champion Virginia.

“You know some of those moments will be in that video,” Hunter said, “and it’s kind of cool to see yourself."

Did you go searching?

“Oh, yeah, for sure. I definitely did,” Hunter said. “Paused it. Screen-shotted it.”