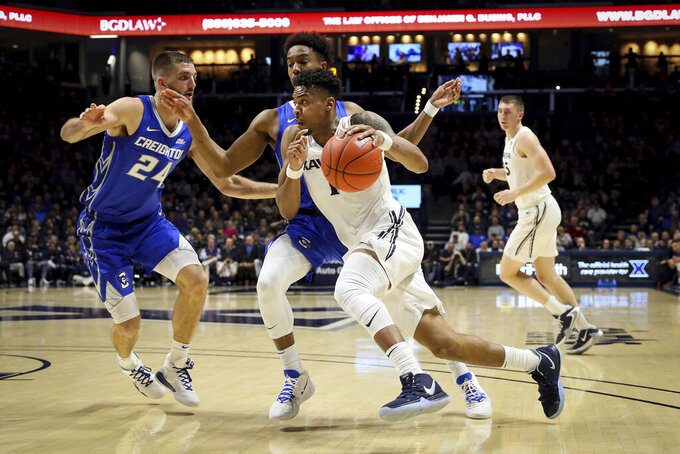 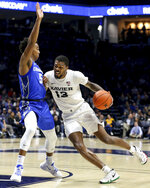 Mitch Ballock scored 19 points and went 5 of 9 from 3-point range, and Ty-Shon Alexander added 18 points lifting the Bluejays to a 77-65 victory over Xavier at Cintas Center, giving McDermott his 500th career victory as a head coach.

“I’ve had a lot of great players and great people play for me, and great coaches over those 25 years,” McDermott said. “To get the (500th) win on the road against a program that I respect as much as Xavier makes it even a bit more special.”

“This is a point of adversity for our team,” said Xavier head coach Travis Steele. “This league is unforgiving. It’s the best league in the country. We’re going to keep working and getting better. It’s not panic time.”

The Bluejays became only the second team to beat Xavier four times in Cintas Center, joining Villanova. Creighton is one of only nine teams to beat the Musketeers multiple times there.

Both teams started cold from the perimeter. Xavier made just one of its first 15 3-point attempts and finished the first half 2 of 17. Creighton made 4 of 12 attempts in the first half, three by Ballock.

"All of our guys work on our 3-point jump shot,” said Creighton guard Marcus Zegarowski. “Defenses are getting out on shooters more often. It is hard to get looks, but we were finding our rhythm in the second half."

Creighton’s game plan was to force the Musketeers to rely on perimeter shots which isn’t their strength. More than half of Xavier’s shot attempts in the first half were 3-pointers.

"Our guys did a great job in the first 15 minutes keeping Xavier at bay,” McDermott said. “Today we tried to sag off and not let (Xavier forward) Tyrique Jones open inside. We were going to let them shoot it. We felt keeping the ball out of Jones' hands was our best option."

The Bluejays extended their five-point halftime lead to 11 points with 16:26 left. Xavier (12-5, 1-3) cut the deficit to three points on Marshall's 3-pointer with 8:20 remaining, but poor perimeter shooting prevented a Musketeers comeback. Xavier shot 5 of 26 from behind the arc (19%).

“We were getting good looks, but we can’t rely on 3s,” Marshall said. “We have to be a defensive-minded team. We let our offense dictate our defense tonight. We need to learn to play a full 40 minutes.”

Zegarowski, who came in averaging 17.4 points per game, third best in the Big East, was held in check for the most part with 11 points. But the attention he was given opened up opportunities for his teammates.

The Musketeers simply had trouble handling Ballock. His fifth 3-pointer put Creighton ahead 65-53 with two minutes left to seal a victory. Xavier beat the Bluejays in two of three meetings last season.

“They got us the last two times, one at their place last year and one in the Big East tournament last year,” said Zegarowski. “It is always good to get a win on the road especially in this league."

Xavier senior point guard Quentin Goodin played only 19 minutes. He was removed from the game with 16:26 remaining and did not return. “He wasn’t doing the game plan,” Steele said. Goodin finished with four assists and no turnovers, but also was 0-for-7 shooting, with six of those attempts from 3-point range.

With the win, McDermott became the 27th active Division I head coach to have 500 or more victories. He has won 50 or more games at four different schools. He owns a .619 winning percentage in his 808 games as a head coach. McDermott’s hair and suit were visibly wet during Saturday’s postgame press conference. “The guys thought that was funny,” McDermott said of his locker-room dousing. “I’ve been doing this for a long time and I’ve been blessed. It’s been a grind. It’s a time of reflection when something like this happens.”

Creighton: The Bluejays play at Georgetown on Wednesday.

Xavier: The Musketeers play at Marquette on Wednesday.