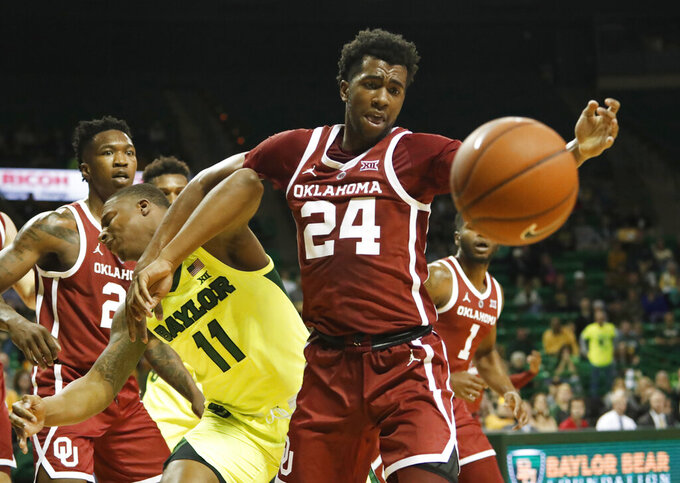 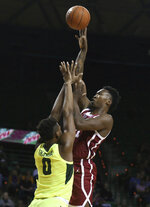 Bandoo was 5 for 7 from 3-point range to lead a Baylor bench that outscored Oklahoma's reserves 24-7 to sweep the season series. The Bears won the first meeting 77-47 on Jan. 28 in Norman, Oklahoma.

"Early, middle, late, Devonte was on fire," Baylor coach Scott Drew said. "He played great and credit our guys for finding him. Devonte spends a lot of time working on his game, so I'm happy for his success."

The Bears (16-8, 7-4 Big 12) took control with a 13-2 run after the game was tied at 35, but they didn't put it away until a Freddie Gillespie putback made it a four-point game with 36 seconds remaining. That was Gillespie's only basket of the game, but he pulled down three rebounds and added a steal and block in the final three minutes. Jared Butler was the only other Bear in double figures with 11.

Makai Mason returned after missing Saturday's game for Baylor. He was 2-of-14 shooting, but he led the Bears with eight assists.

"Him just being on the court provides a big presence with his leadership. He's played in college for five years, so he knows the ins and outs," Bandoo said. "The other team knows he's such a dangerous threat out there. It does help. Teams really have to locate him. He can attack the basket and he's good at passing. They have to pay attention to him. When we don't have him it's tough."

"They shot the ball well. Every time they were open, they made the opportunity," Oklahoma coach Lon Kruger said. "They shot it so well in the first half from 3 we didn't feel bad about where we were (at halftime). We did a little better job against the 3 in the second half, but they've got so many weapons. They've got a good ballclub."

Oklahoma had plenty of opportunities down the stretch but couldn't take advantage. The Sooners trailed 53-51 when Baylor was called for a flagrant foul. They came up empty when James missed both free throws, and they turned it over on the ensuing possession. A minute later and down by two again, Rashard Odomes slipped and fell on a drive for another turnover that set up Gillespie's deciding basket.

Baylor entered the game as the top 3-point shooting team in the Big 12 during conference play, and that ability kept them in the game in the first half. Eight of their 10 field goals during that time were from 3-point range, which accounted for 24 of their 31 points. That opened things up on the inside in the second half for the Bears, when they outscored the Sooners 18-10 in the paint and 8-0 off turnovers.

Oklahoma will play its second straight on the road against TCU on Saturday.

Baylor begins a two-game road trip against No. 15 Texas Tech on Saturday.