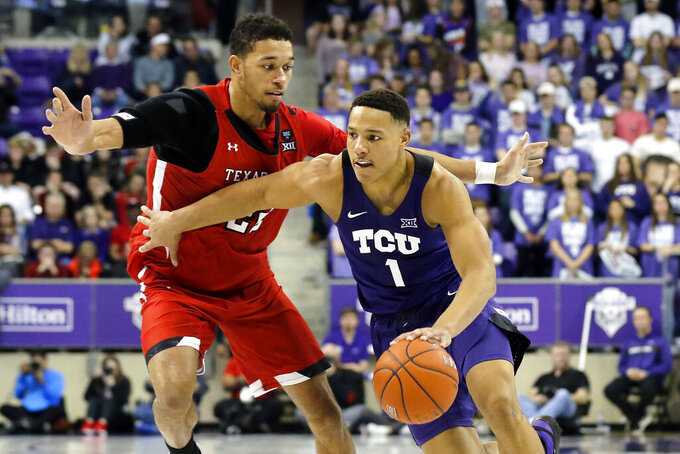 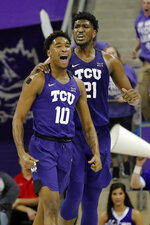 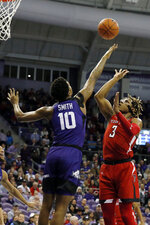 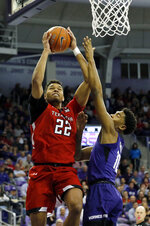 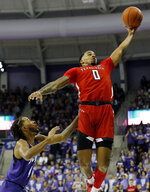 FORT WORTH, Texas (AP) — TCU coach Jamie Dixon sat down with Desmond Bane and a copy of the Big 12 stats, using those impressive numbers to emphasize to the senior guard how he is one of the league's best players.

Bane scored 27 points on 10-of-15 shooting, with six 3-pointers and several short floaters, and also had six rebounds as TCU returned home after a miserable week on the road to upset No. 18 Texas Tech 65-54.

“One of my favorite players in the Big 12, a guy that’ll make a living playing basketball, a guy that’s worked on his game and developed over the years,” Beard said. “I have so much respect for Bane. He took the game over tonight. He was the best player on the floor."

The Horned Frogs (13-5, 4-2 Big 12) pushed ahead to stay with a 13-2 run to start the second half. Bane had a 3-pointer and layup in the first 74 seconds after halftime, and his one-handed floater off the glass capped that spurt to put them up 40-33 with just over 16 minutes left.

“I just try and do my part. Made open shots and tried to get everyone going with my energy," Bane said.

As for his meeting with Bane earlier in the day, Dixon said he took the stats "and told him you’re in the tops in rebounding, tops in scoring, stops and assists. I told him you can’t go quiet on us, you are the key to our team. ... We’re asking him to do a lot but that’s what good players are asked to do."

Kevin Samuel added 11 points and 11 rebounds for TCU, a 2 1/2-point underdog. The Horned Frogs were coming off losses of 32 points at No. 14 West Virginia and 20 at Oklahoma last week.

“I love the way we responded,” Bane said. “It’s huge for us moving forward."

Jahmi'us Ramsey had 15 points for Texas Tech (12-6, 3-3), which lost for the first time in its seven meetings as a ranked team against TCU. Terrence Shannon and TJ Holyfield each had 10.

“A lot of self-inflicting damage on ourselves, turned the ball over too much,” Holyfield said. “We had a game plan and we didn’t execute it at times and that’s how the game ended how it ended."

The Frogs scored the game's first five points, but Texas Tech pushed to a 23-15 lead on a 3-pointer by Davide Moretti. After a jumper by Bane, the teams then traded turnovers before a dunk by Kyler Edwards, and the Red Raiders still led 31-27 at the break.

Samuel, the 6-foot-11 sophomore center, later had three consecutive baskets for the Frogs, with his dunk starting that stretch for the first double-digit lead. He later made a putback layup where the ball rolled on the rim when the shot clock went off before falling through for a 51-38 lead.

“The truth is we got outplayed tonight," Beard said. “We got out-competed tonight, they were the more aggressive team, and Bane played fantastic.”

Texas Tech: The Red Raiders never really were able to recover after TCU's opening spurt in the second half despite an always loud and large group of fans encouraging them with chants of “Raider Power” that at times were louder than the home fans. They were 0 for 7 on 3-pointers after halftime.

TCU: The Horned Frogs have won 14 of their last 19 conference home games. ... TCU is now 6-22 against ranked teams in Dixon's four seasons.

Texas Tech hosts No. 15 Kentucky on Saturday in the only game of the Big 12/SEC Challenge matching two ranked teams. The Red Raiders are 0-4 against the Wildcats, but haven't played them since 1994.

TCU is on the road to play Arkansas on Saturday in the Big 12/SEC Challenge.