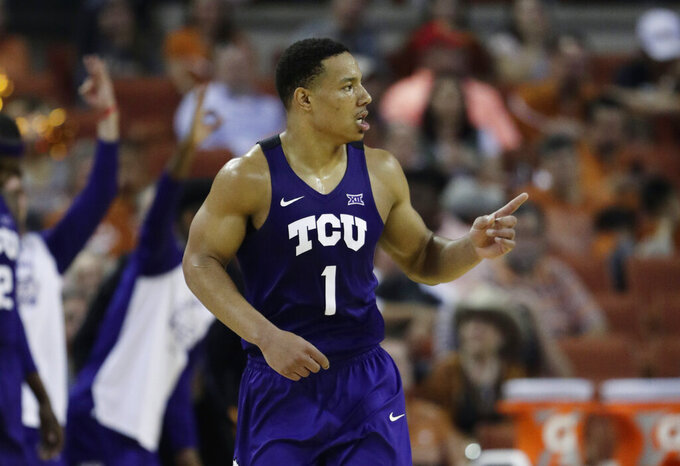 TCU guard Desmond Bane (1) runs up court after scoring against Texas during the second half of an NCAA college basketball game, Saturday, March 9, 2019, in Austin, Texas. (AP Photo/Eric Gay) 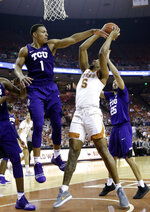 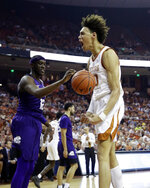 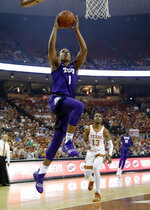 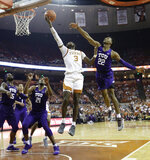 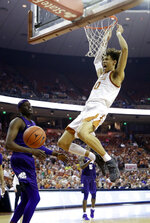 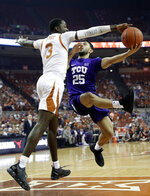 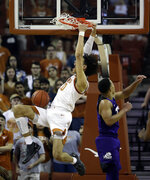 AUSTIN, Texas (AP) — TCU's depleted roster only uses a seven-man rotation. Desmond Bane was about all the Horned Frogs needed to beat Texas.

Desmond Bane made six 3-pointers and scored 34 points as the Horned Frogs rolled over the Longhorns 69-56 Saturday, handing Texas a critical loss that could be a big blow to its NCAA Tournament hopes.

The Horned Frogs (19-12, 7-11 Big 12), swept the Longhorns in the regular season and sent Texas to its third finish under .500 in league play in coach Shaka Smart's four seasons. And they bolstered their own argument for the postseason.

"This is huge for us," Bane said. "Going on the road and getting the win and sweeping Texas always feels good. The energy in the program, it feels right. It feels good. Hopefully we can keep it going."

TCU had everything going Saturday. The Horned Frogs shot 54 percent and controlled the rebounding with a 35-24 edge. They had just seven offensive rebounds, but three came in the final minutes that extended key possessions and whittled away time to prevent a Texas rally. TCU also had seven blocks.

"There's a lot of motivation for our guys," TCU coach Jamie Dixon said. "We beat a lot of teams that are in the tournament."

TCU: Bane could hardly miss but Texas barely seemed to guard him at times as several of his 3-pointers were from wide-open looks. And he stayed on the move, getting himself in position for easy follow-ups when teammates missed.

Texas: The Longhorns needed a big effort and didn't get one in a game that could decide their postseason. The Longhorns were 4 of 19 from long range, including an 0-5 effort from Jase Febres, who was the Big 12 player of the week just a week ago.

"I've never been as disappointed as I am right now," said Smart, who is 66-65 overall at Texas, and 31-41 in the Big 12. "I know our players are a better than they played today, I know we're a better team than we played today. It doesn't matter, you've got to go do it."

Texas honored suspended guard Kerwin Roach II during the pregame ceremonies for the team's seniors. Roach has missed five games since being suspended for an unspecified violation of team rules. Texas is 1-4 while he's been out, but the school has indicated Roach could be allowed to return for the Big 12 Tournament next week.

TCU played without assistant coach Corey Barker, who was placed on administrative leave by the school Friday after media reports linked him to an ongoing federal probe into corruption in college basketball. Barker has been on the TCU staff for three seasons.

"He's in shock and we'll see where it goes," Dixon said. "He's a good person and a good family man. The guys were upset. He means a lot to them. I was upset as well."