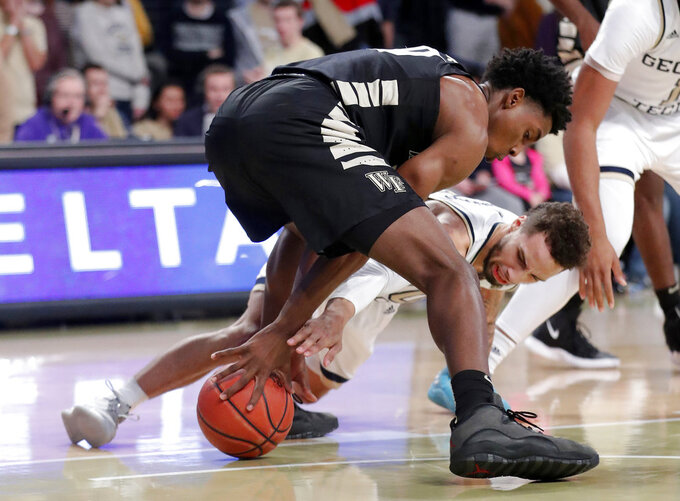 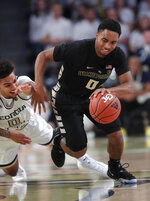 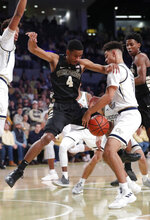 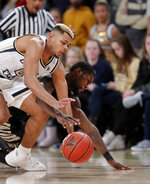 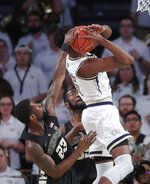 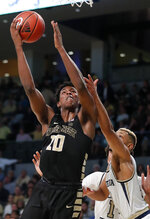 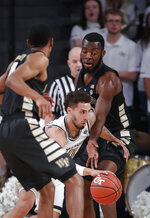 ATLANTA (AP) — James Banks III was the focus of the offense as Georgia Tech rolled to its most points in an ACC regular-season game in 14 years.

Banks scored 20 points and Georgia Tech continued its home domination of Wake Forest by beating the Demon Deacons 92-79 on Saturday in the Atlantic Coast Conference opener for each team.

The Yellow Jackets hadn't scored as many points in an ACC regular-season game since beating Virginia 92-69 on Jan. 8, 2005.

Like Wake Forest, Georgia Tech (9-5, 1-0 ACC) is picked to finish near the bottom of the ACC. Pastner seized the chance to relish life atop the conference.

"We're first place in the league, so that's awesome, and we've got a win on the board, so that's great," Pastner said.

Banks, a junior transfer from Texas, made nine of 11 shots from the field. Most of his points came on jams and short jump hooks.

"We had a tough time guarding Banks," said Wake Forest coach Danny Manning. "We wanted to show a little bit more resistance in the paint in that regard."

Banks (6-foot-9, 240 pounds) was held to only four points in a 79-63 win over South Carolina Upstate on Wednesday night and then was challenged by Pastner to give more consistent production.

"Hopefully I can continue to show consistency and be great and try to dominate this league," Banks said.

A jam and free throw by Banks gave Georgia Tech its big lead at 39-28 early in the second half, but the Yellow Jackets couldn't pull away until late in the game.

Back-to-back baskets by Chaundee Brown, who had 10 points, cut the Georgia Tech lead to 49-46.

Wake Forest couldn't take advantage of a chance to pull even and Georgia Tech answered with four straight baskets. A layup by Alston, a follow-jam by Banks, a scoop shot in traffic by Alston and a jump hook by Banks pushed the lead back to 11 at 57-46.

Georgia Tech fans in the crowd of 6,397 booed as Wake Forest continued to foul in the final minute despite having a double-figure deficit.

Wake Forest: In desperate need of a strong ACC start following an unimpressive nonconference schedule that included losses to Houston Baptist, Richmond and Gardner-Webb, the Demon Deacons instead showed their lack of experience. Childress, Brown and 7-foot sophomore center Olivier Sarr are team's only players to have appeared in an ACC game before Saturday. Freshman Jaylen Hoard had 19 points.

Georgia Tech: Alvarado had 13 points, seven assists and no turnovers as the Yellow Jackets' offense operated with impressive efficiency. Devoe added four assists with two turnovers. They shot 55.8 percent from the field, the team's top mark in an ACC game in four years, and had 20 assists on 29 field goals.

Former Demon Deacons standout John Collins, now in his second season with the Atlanta Hawks, wore a black Wake Forest warmup suit as he sat behind the team's bench.

Wake Forest was held without a field goal for the first five minutes. Childress didn't score until sinking a 3-pointer with 5:18 remaining in the half. Childress scored 14 points in the final 2 minutes while making four 3s.

"I was just competing, trying to win, trying to make the game as close as we possibly can," Childress said. "Obviously, we didn't do enough."