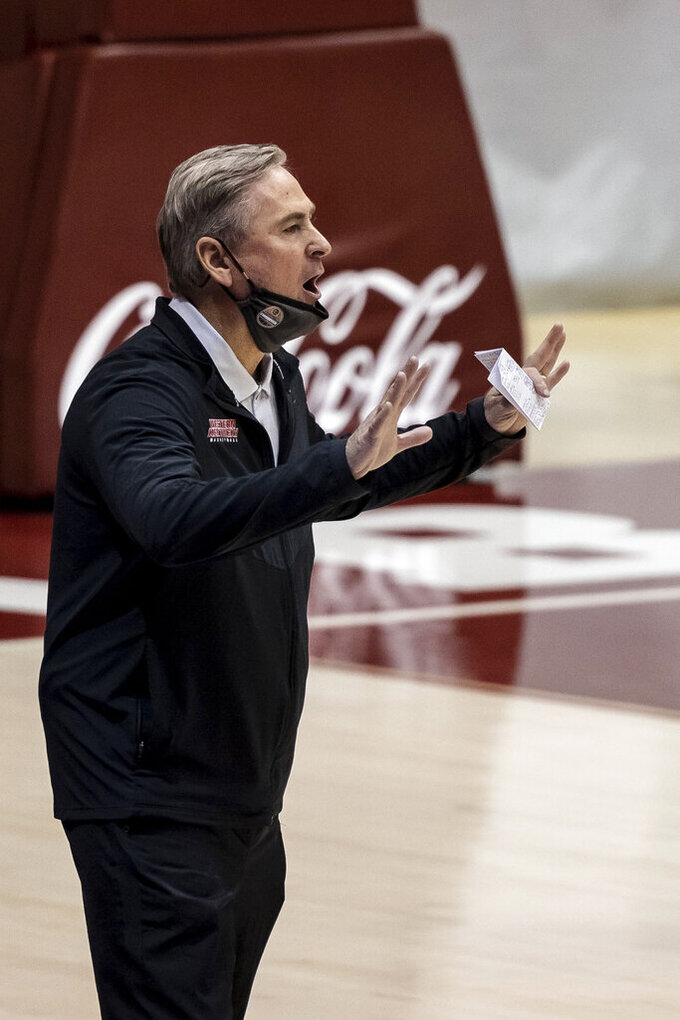 Western Kentucky head coach Rick Stansbury yells to his players during the first half of an NCAA college basketball game against Alabama, Saturday, Dec. 19, 2020, in Tuscaloosa, Ala. (AP Photo/Vasha Hunt) 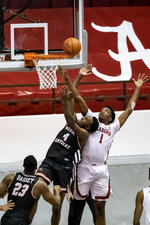 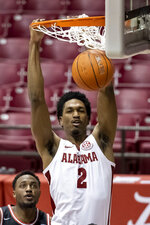 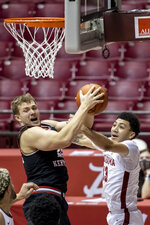 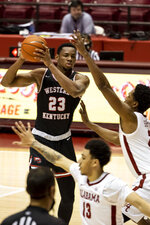 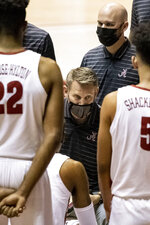 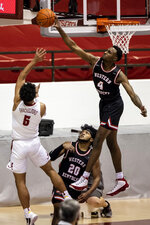 TUSCALOOSA, Ala. (AP) — Charles Bassey scored 27 points with 12 rebounds, scoring the game-winner on a putback with 23 seconds left and lifting Western Kentucky past Alabama 73-71 on Saturday.

Jordan Rawls added a career-high 20 points and made four big free throws to erase a late three-point Alabama lead as the Hilltoppers (6-2) persevered through a tight second half, battling through 12 lead changes and 10 ties.

Bassey's 27 points is two shy of his career high against Gardner Webb earlier this season. He has five double-doubles this season and pushed his NCAA-leading blocked shot total to 31 with three on Saturday.

Herbert Jones led the Crimson Tide with 16 points, but his potential game-tying shot missed with about 10 seconds left and WKU's Josh Anderson grabbed the rebound. Anderson sparked a late 6-0 run for the Hilltoppers with back-to-back steals and a dunk.

Jordan Bruner added 14 with six rebounds for Alabama and Jalen Shackelford added 12 points. Shackelford was 2-for-9 shooting but made 7 of 8 at the line. Jahvon Quinerly, who led Alabama with nine points at halftime, was scoreless in five minutes of playing time in the second half.

The Tide had to come from behind to defeat Furman 83-80 on Dec. 15 and have fallen from being ranked to not even receiving votes in the Associated Press Top 25 poll.

The win is Western Kentucky's fourth straight and is Alabama's first loss at home this season. The Hilltoppers now have nine wins over Power Five teams since 2017.

Western Kentucky coach Rick Stansbury spent 14 years at Mississippi State and in the 2004 regular-season finale, his squad rallied from a 18-point deficit in the second half to defeat the Crimson Tide in overtime and claim the outright Southeastern Conference title.

Each team was originally scheduled against other teams, but COVID-19 issues with their opponents set up Saturday's game.