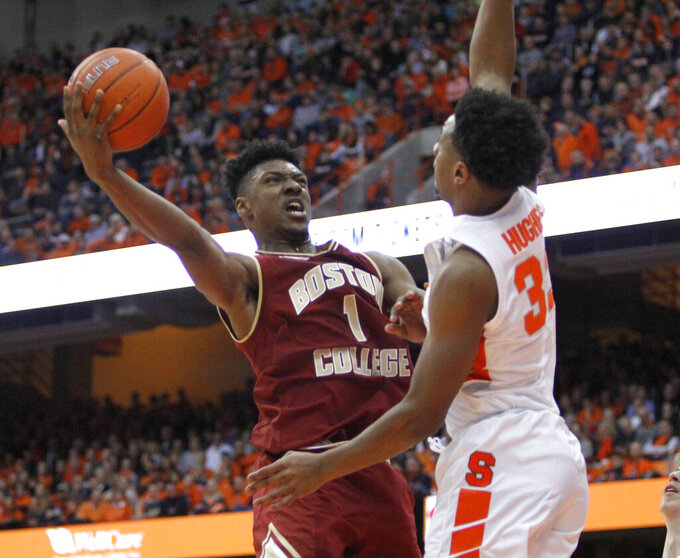 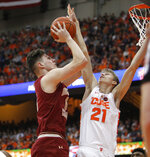 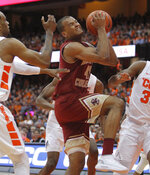 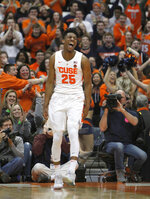 His son appears to be that player.

Tyus Battle scored 21 points, including 15 in the second half, but it was Buddy Boeheim's career-high 16 points that helped Syracuse withstand a late Boston College rally to defeat the Eagles 67-56 Saturday.

Boeheim came in with 9:40 to go in the first half and his Orange clinging to a 14-12 lead. He hit three 3s and two foul shots in a five-minute span to help the Orange extend to a 30-21 margin.

"He makes open shots," said BC coach Jim Christian. "You have to know where he is, and if he has any room at all he makes it. He must love seeing us because he's played great against us twice."

Oshae Brissett chipped in with 12 for Syracuse (17-7, 8-3 Atlantic Coast Conference), which rebounded from an 18-point home loss Tuesday against No. 22 Florida State. Attendance at the Carrier Dome was announced as 26,011 — the largest in Division I this season.

Syracuse held the Eagles to 33 percent shooting from the field, including 7 of 23 from 3. The Orange blocked six shots and scored 25 points off 18 BC turnovers.

The Orange built a 60-40 lead with 8:15 to go on a third-straight bucket by Battle, but the Eagles scored the next 14 points to close to 60-54 on a 3 by Bowman with 3:53 to go. Syracuse closed the game on seven foul shots for their final margin.

The Eagles had just one field goal after Bowman's 3 — a jumper by Chris Herren.

"I'm tired of falling behind by 20," Christian said. "I'm more concerned about why we fall behind by 20 than why we come back."

Boeheim came to Syracuse with a reputation as a deadly 3-point shooter. Things didn't start out well for the freshman. He hit just 11-of-46 3s in his 14 games. Not counting Tuesday's game against Florida State, when he went 0-for-6, Boeheim has hit 18 of 28 from beyond the arc in his last seven outings.

"It just helps playing with someone like Tyus," Buddy Boeheim said. "They over help on him which they should because he's going to beat that first defender, and I'm usually open for the 3. They'll kick it out and I'll get a good look."

Battle attacked the basket, opening things up for Boeheim.

"You have to do such a good job trying to keep Battle out of the lane that when you come to help he's (Boeheim) over there," Christian said. "If you don't rotate quick enough he's going to make it."

It was an offensively challenged first half for both teams. BC's first half total of 24 was their lowest of the season. The team's previous low was 25. BC missed their first 11 shots and didn't hit their first field goal until Bowman's jumper at 13:48. BC was just 8 of 26 from the floor and 1 of 9 from 3.

Christian didn't think his team was impacted by Bowman sitting on the bench.

"We played well at the beginning. We had four layups, some guys didn't hit shots," he said.

"Our team did well playing without me. Staying together for those first five minutes was good for us."

BC: The Eagles are playing out the string although consecutive home games against Pitt and Miami give the Eagles some short-term hope.

Syracuse: Saturday's win was huge. Four of the team's final seven games are against ranked teams. Somehow, the Orange need to get to 20 wins for a reasonable shot at an NCAA Tournament bid. Elijah Hughes, who had another subpar game Saturday, Howard and Chukwu need to step up.

Syracuse senior point guard Frank Howard had just three points on 1-of-9 shooting and one assist.

Orange center Paschal Chukwu was a non-factor, scoring just one point in 15 minutes. He did manage two blocks.

The Eagles were without starting guard Wynston Tabbs for the sixth straight game and eighth overall. Out with a knee injury, Tabbs averages 13.9 points and 2.7 assists a game.

BC hosts Pitt on Tuesday.

The Orange has a tough road matchup Wednesday against North Carolina State.