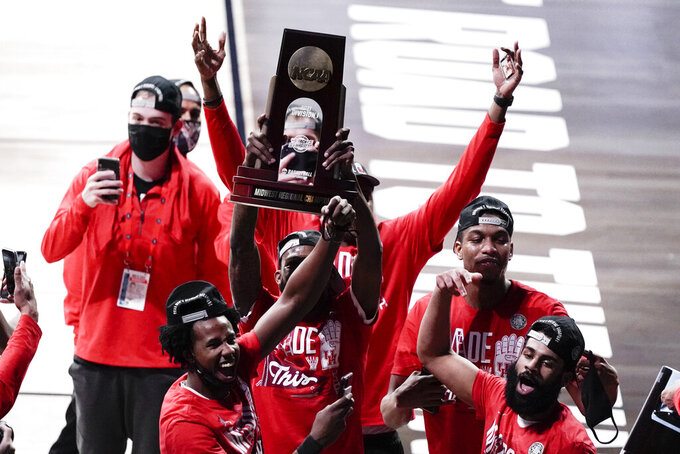 It also pits father against son.

Alvin Brooks is an assistant coach at Houston. Alvin Brooks III holds the same position at Baylor. They face off Saturday in an NCAA Tournament semifinal that has both of them scrambling to get as many tickets as possible for relatives.

“I’ve received a lot of texts, a lot of calls, and I’m sure you have, too,” Alvin Brooks III said to his father Tuesday at a joint Zoom session with reporters. “We’re going to have to figure out how we’re going to make it work.”

Those relatives could have divided loyalties. The elder Brooks said a niece is having T-shirts made that are red on one side and green on the other to enable family members to show support for both sides.

This matchup is unexpected because Alvin Brooks III never planned on coaching at all even though his dad had made a career of it.

The elder Brooks was Houston’s head coach from 1993-98 and has worked as an assistant coach or director of operations at several schools since, including stints on Billy Gillispie’s staffs at UTEP, Texas A&M and Kentucky. He returned to Houston as an assistant coach in 2010 and has been there ever since.

He started this second stint at Houston working on James Dickey’s staff and stayed after Kelvin Sampson took over in 2014.

Brooks III praises his dad for not trying to get him to follow a similar path.

“He never pushed me to play a sport at all and allowed me to kind of grow and do what I love to do,” Brooks III said. “I actually never wanted to be a coach, so he never really brought me around the gym as much because he wanted me to be a kid and enjoy it organically.”

Brooks III changed his mind about coaching while hanging out with former NBA player Rashard Lewis, who served as the best man at his wedding.

“I was in Seattle with him for about two months,” Brooks III said. “At that time, I was working in the finance industry. I was miserable. I was chasing money, to be honest with you. I thought I was going to be a millionaire. I thought I was going to manage athletes’ money and be a millionaire. I found out that wasn’t my calling. I would go watch him practice and go to his games.”

Watching those practices and games helped Brooks III realize he wanted to coach.

When he told his dad, the elder Brooks told him to wait a couple of weeks first to make sure the interest was more than just a phase. The elder Brooks then encouraged his son to work his way up through the junior-college ranks.

“He actually had an offer to a Division I school from a friend of mine initially, first coming out,” Brooks said. “I said, ‘No, he can’t accept that. He ain’t ready. He needs to go figure out what to do.’"

Brooks III, one of five siblings, started out at Arkansas-Fort Smith and Midland College before joining Division I staffs at Bradley and Sam Houston State. He worked four seasons on Bruce Weber’s staff at Kansas State before coming to Baylor in 2016.

Now father and son face off on the game’s biggest stage.

They’ve been on opposing teams before. Brooks III’s Sam Houston State teams lost to Brooks’ Houston squads a couple of times. Brooks also was at Baylor in 2017 when the Bears lost to Houston in a preseason scrimmage for hurricane relief.

Of course, this time the stakes are much higher. That could limit the conversations between Brooks and Brooks III, who typically talk to each other every day.

“Starting Wednesday, Thursday, we’ll probably be locked in and won’t talk as much,” the elder Brooks said. “We’ll talk in passing and get ready to play. It’s all love, but he’s as competitive as I am.”

Baylor has collected 9½ steals per game in the NCAA Tournament, with the Bears starting to play the type of defense that helped them win their first 18 games of the season.

The Bears were 17-0 when they took a three-week break because of COVID-19 issues within the program. Their defense took a step back when they returned to action after such a long layoff.

Baylor’s issues on defense were most apparent when they lost 83-74 to Oklahoma State in the Big 12 Tournament. They arrived for the NCAA Tournament with renewed focus on that side of the court.

“Once we lost to Oklahoma State, I believe in that game we only got two or three stops in the last eight minutes of the game,” Baylor coach Scott Drew said. “And I thought our guys really bought into what we did in practice, which was basically beginning-of-the-year practice drills. And we returned to the basics and worked on our rotations, worked on our closeouts and everything, and our defense has gotten better and better since that time.”

Houston teammates DeJon Jarreau and Brison Gresham took a long road to the Final Four that took them to various parts of the country, though they remained teammates the whole way.

Jarreau and Gresham both went to high school at McDonogh 35 in New Orleans. They played one season at UMass, didn’t play at all during one year at Howard College in Big Spring, Texas, and eventually landed at Houston.

Now they’re both in the Final Four as fifth-year seniors.

“We met in the ninth grade,” Jarreau said. “We’ve been through everything together — you know, UMass, left UMass, I attended Big Spring for a year, came to Houston, and now it’s our third year at Houston. It’s like a dream come true.

“We always talked about this, being somewhere as a package deal. To now be in the Final Four together, that’s a story worth telling.”