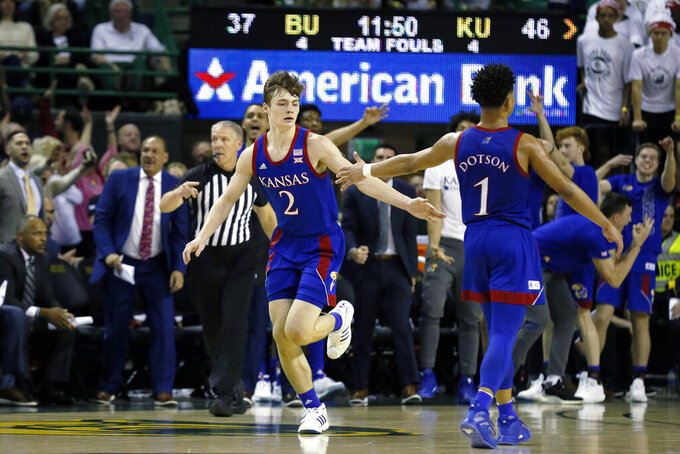 Kansas was the heavy favorite to land the overall No. 1 seed for the NCAA Tournament when word began to filter through conference tournaments that COVID-19 was going to shut down the remainder of the season.

Now, the Jayhawks might not even be the favorites to finish first in the Big 12.

With four starters back from a team that gave Kansas fits last season, second-ranked Baylor has been picked by many as the class of the conference.

Jared Butler, Davion Mitchell and MaCio Teague give the Bears one of the nation's best backcourts, top-100 recruit L.J. Cryer and transfer Adam Flagler provide depth, Mark Vital can stake claim as one of the country's best defenders and Tristan Clark is ready to take over for departed big man Freddie Gillespie.

“In a season that got moved back and a short summer, you definitely benefit from having guys that have college experience,” Baylor coach Scott Drew said. “Now, just because players did it one year doesn't guarantee that they'll be as successful the next year. But it definitely gives you an advantage, and most people would take it rather than not.”

Experience is one thing; experience winning is another. Baylor hasn't reached the third weekend of the NCAA Tournament since 2012, and the Bears haven't won a league championship since sharing the Southwest Conference title in 1950.

Kansas may have lost big man Udoka Azubuike and point guard Devon Dotson, their key cogs last season, but they return a bevy of talent along with a championship pedigree that has made them so tough over the years.

“We are missing a lot of key pieces from last year, but this year brings another good team. It's just a different team," said forward Jalen Wilson, an elite recruit who wound up missing last season with an injury. “We don't have Doke, we don't have Dot, but we have other wings, new players, and I think we just have a new team that's a little bit younger, that's hungry to play, hungry to win.”

The Big 12 figures to be a brutal test once again. Baylor and Kansas are highest in the preseason Top 25, but they are joined by Texas Tech at No. 14 and West Virginia at No. 15. Throw in No. 19 Texas and the league has five top 20 teams.

“That's hard to duplicate year in and year out,” Drew said. “That just shows you how many talented teams and how many returning players in the Big 12 there are this year. This could be one of those special years, because very, very, very seldom do you get this many quality basketball teams out there.”

BEST OF THE REST

Cunningham could be the No. 1 pick in the NBA draft with a good season in Stillwater. Kansas reeled in five-star guard Bryce Thompson, Micah Peavy was one of the elite prep prospects in Texas when he signed with the Red Raiders, and 7-foot center Xavier Foster could be the key to the Cyclones getting back on track.

The Red Raiders restocked with five-star guard Nimari Burnett and transfers Joel Ntambwe and Marcus Santos-Silva, then got a late lift when Georgetown transfer Mac McClung received an NCAA waiver to play immediately. West Virginia returns Oscar Tshiebwe and Derek Culver, two of the most intimidating post presences in college basketball. And the Longhorns reeled in top-10 guard Greg Brown, which could take some heat off coach Shaka Smart.

Good luck finding a bad non-conference game. Baylor loaded up with No. 1 Gonzaga and will play in the Empire Classic, potentially against No. 3 Villanova and No. 18 Arizona State. Kansas also plays the 'Zags along with No. 10 Kentucky, No. 11 Creighton and No. 12 Tennessee. Texas Tech scheduled No. 17 Houston, Texas will play the relocated Maui Invitational in North Carolina and West Virginia will face Memphis and potentially Creighton in South Dakota.

Like every other sport, college hoops will be walking a fine line during the pandemic. The threat of positive tests within a program will put an emphasis on depth, giving schools such as Baylor and Kansas an advantage.

“We tell our guys, ‘Enjoy the ride, not just the destination. Live where your feet are, smell the roses.’ All these things basically mean appreciate every day,” Texas Tech coach Chris Beard said. "The No. 1 thing, I think, that college basketball people take from the adversity of the COVID is just an appreciation of the game and being a part of the game