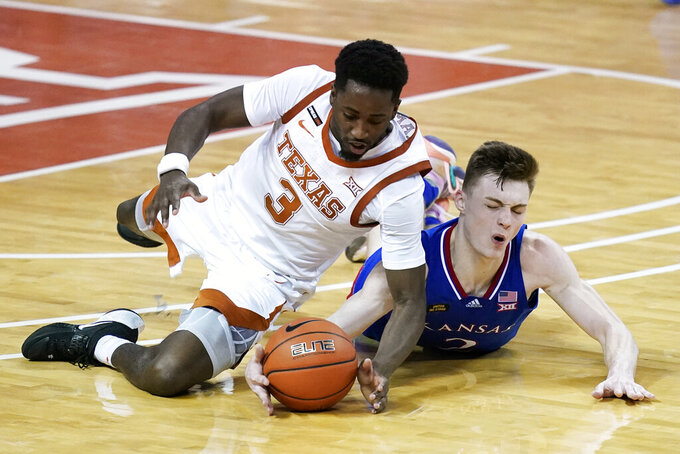 No. 2 Baylor begins a brutal four-game stretch as it attempts to complete a perfect regular season when the Bears head to Allen Fieldhouse to play No. 17 Kansas on Saturday night. The Bears edged Iowa State in a sloppy performance after a long COVID-19 pause, then had their Thursday night game against No. 10 West Virginia postponed. That means Baylor's finishing stretch begins with the Jayhawks, fresh off an overtime loss to Texas, followed by the makeup game with the Mountaineers on Tuesday night. They finish with Oklahoma State and No. 18 Texas Tech.

The No. 14 Longhorns face the Red Raiders in the other marquee game Saturday, which could go a long way toward Big 12 and NCAA Tournament seedings. Oklahoma State visits No. 7 Oklahoma, Kansas State heads to West Virginia and TCU plays Iowa State in the remaining weekend games. The Sooners and Cowboys turn around and play again Monday night.

Kansas State guard Mike McGuirl has had a forgettable senior season for a rebuilding program that has struggled so much that coach Bruce Weber could be on the hot seat. But McGuirl will always have the memory of Tuesday night, when he had 16 points, a career-high nine rebounds and five assists to lead the Wildcats (7-18, 3-13) to a stunning upset of the sixth-ranked Sooners (14-6, 9-5). Kansas State ended the game on a 16-3 run for a 62-57 victory.

The Bears' win over Iowa State improved them to 18-0, breaking a tie with the 2011-12 team for the best start in school history. ... Kansas led the entire way in beating Texas Tech early in the week. The Jayhawks' five-game win streak came to an end against the Longhorns. ... The Sooners had won eight of nine before losing to Iowa State, a streak that included their first win at Iowa State in 10 years. ... Oklahoma State forward Cade Cunningham is averaging 20 points per game against ranked opponents, the third-best total nationally. ... TCU forward Kevin Samuel had five blocks against Kansas State to make him the the only player to surpass 200 for his career. He has 201 heading into the weekend.

Baylor is riding a 10-game win streak and has not lost since Jan. 16. ... Texas Tech's Vivian Gray had a career-high 38 points with 10 rebounds, three blocks and three steals in an overtime win over Kansas. She was 14 of 21 from the field and 10 of 13 from the foul line. ... Iowa State freshman Lexi Donarski had 20 points, four rebounds and four assists in a win over Kansas. It was her fourth 20-point game this season. ... Oklahoma State forward Natasha Mack and Texas standout Charli Collier are tied for second nationally with 15 double-doubles apiece. ... The Jayhawks' Holly Kersgieter had career highs of 29 points and 16 rebounds in their overtime loss to Texas Tech. ... Oklahoma State's loss to Baylor was just its second since Jan. 20, when the Cowgirls also lost to the Lady Bears. ... TCU's Lauren Heard had a career-best 38 points against West Virginia. Her previous career high of 30 points also was set against the Mountaineers.