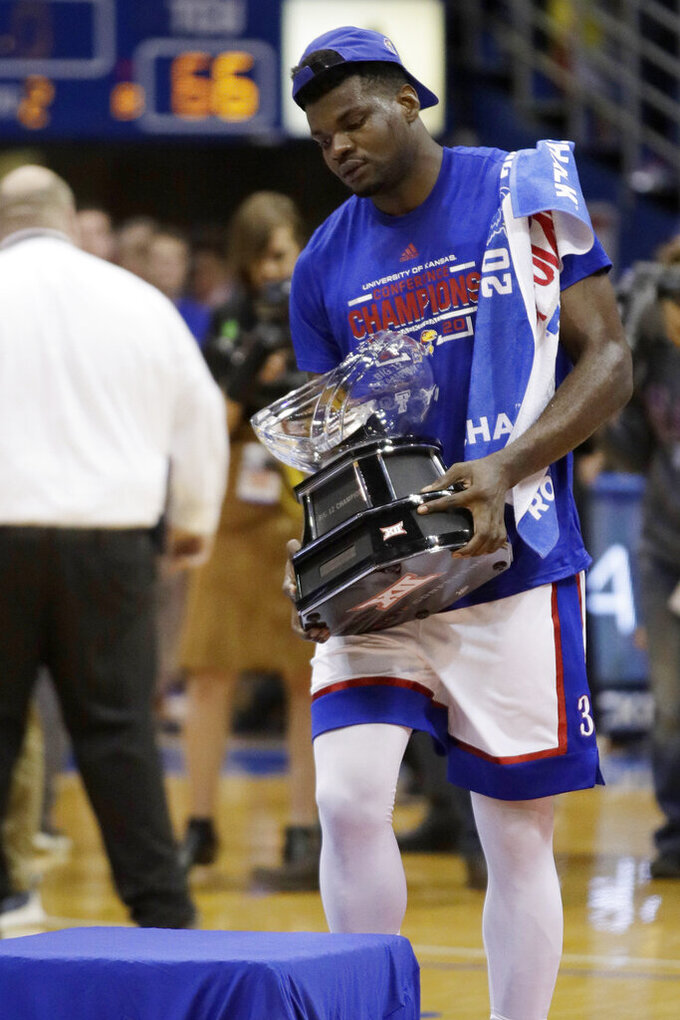 There are two crucial games on Saturday and for about an hour they will be running concurrently. The first involves No. 4 Baylor heading to West Virginia in a game that tips off at noon CT, and the second involves top-ranked Kansas heading to Texas Tech in a game that tips an hour later. The Bears (26-3, 15-2) have lost two of their last four games — including the rematch with the Jayhawks in Waco — to fall a game back in the Big 12 standings. They must win and hope Kansas (27-3, 16-1), a team that hasn't lost since Baylor visited Allen Fieldhouse in January, stumbles against the Red Raiders to earn a share of the conference title. West Virginia (20-10, 8-9) is probably safe for the NCAA Tournament, but a .500 record in the league would certainly seal a bid. Texas Tech (18-12, 9-8) is in a similar situation in that coach Chris Beard's club is likely dancing but would take all the drama out of Selection Sunday with a win.

There are three teams with much more tenuous NCAA Tournament aspirations looking for wins Saturday. Oklahoma (18-12, 8-9) and TCU (16-14, 7-10) both believe they have a shot, but at least in the case of the Horned Frogs, the regular-season finale is likely a must win. Texas (19-11, 9-8) has been on a rise the past few weeks and could likewise all-but clinch an NCAA bit by beating Oklahoma State (16-14, 6-11). There is also seeding at stake for next week's Big 12 Tournament.

Kansas center Udoka Azubuike was only 50-50 to play Wednesday night against TCU after tweaking his ankle last weekend at Kansas State. But the 7-foot, 270-pound beast merely threw up a career-high 31 points with 14 rebounds and five blocks in his final game at Allen Fieldhouse. Azubuike became the first Kansas player in the Big 12 era to have a 30-10-5 stat line in any game. And it could have been even better had Azubuike not gone 5 of 14 from the foul line.

The Big 12 hasn’t had a one-loss champion since expanding to 18 games for the 2011-12 season. The last team to win the Big 12 with one defeat was Kansas (15-1) during the 2009-10 season. ... The Jayhawks' regular-season title is their 19th in the Big 12 and 62nd conference title overall. The Bears are hoping for a share of their first. ... Baylor has won 15 league games to set a school record heading into its finale. The Bears also have swept a school-record six opponents. ... Oklahoma State has won five straight at home. ... Texas has won five straight Big 12 games. The Longhorns also finished 5-4 on the road in league play, joining only Baylor and Kansas with winning records. ... The Big 12 and Big East are the only leagues in which every member has beaten at least one Top 25 team.

No. 2 Baylor (28-1, 17-0) stretched its record Big 12 regular-season win streak to 58 with a win over Texas this week. ... Zakiyah Franklin scored 23 points to help Kansas beat Oklahoma State last weekend. ... Kansas State has won nine of its past 12 league road games. ... Oklahoma's Taylor Robertson set the Big 12 single-season record with her 123rd 3-point last weekend against Texas. ... Vivan Gray hit the 500-point mark for the second straight season, joining Andrea Riley and Kaylee Jensen as the only Cowgirls to accomplish the feat. ... Texas freshman Celeste Taylor scored a career-high 27 points in the Longhorns' win over Oklahoma. ... Texas Tech beat a Top 25 opponent for the first time in three years when the Lady Raiders beat No. 25 TCU last Sunday.