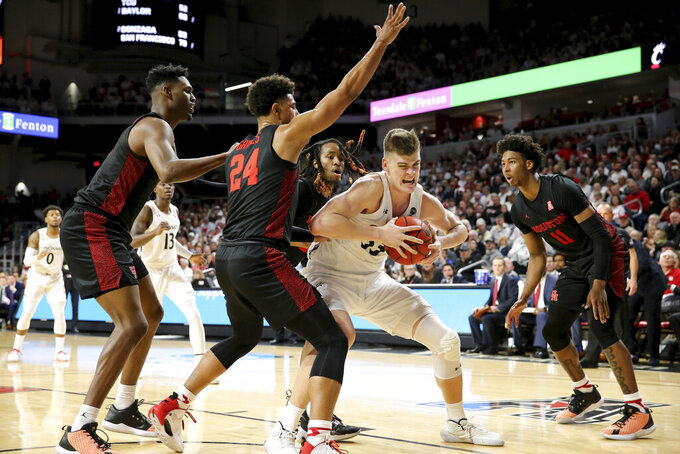 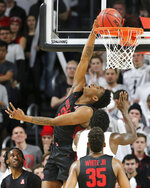 With No. 21 Houston trailing by two points, Cedrick Alley Jr. rebounded a missed free throw. He fed Caleb Mills, who's tying attempt from the top of the key clanged off the rim at the buzzer, giving Cincinnati at 64-62 win on Saturday night.

Cincinnati's Trevon Scott wasn't the only person in the arena to breathe a sign of relief.

“I was just praying he missed it,” the Bearcat senior forward said. “I blame it on me. I should've had the rebound. When the buzzer went off, it was a big relief.”

Houston already was struggling from the field in the last part of the second half when point guard Dejon Jarreau drew a technical foul and was ejected when the referees ruled that he bit Cincinnati’s Mamoudou Diarra with 6:16 left in the game.

Keith Williams scored 10 of his 12 points in the second half and Cincinnati (14-7, 7-2) rallied from a 15-point deficit in the second half to knock Houston (17-5, 7-2) out of first place and extend the Bearcats' winning streak to four games.

“That's a big win,” Scott said. “It'll help our confidence, showing we are who we are when we stick together and stick to the game plan and go out and play hard. The tougher team won.”

Williams scored on a floater with 2:02 left, giving Cincinnati its first lead, 61-59, since the Bearcats led 8-5. Williams followed with two free throws, generating roars from the sellout crowd of 12,189.

“Obviously, a pretty exciting college basketball game,” first-year Cincinnati coach John Brannen said. “I've been in many environments and lots of arenas, but that was darn near as loud as I've heard.”

“It's hard to win on the road, period,” Sampson said. “That's a great crowd.”

Despite massive struggles at the free throw line, Jarron Cumberland finished with 17 points for Cincinnati. Cumberland, hitting free throws at a .743 clip entering the game, went 5 for 12.

The Bearcats capitalized on Houston missing 14 of its last 15 shots from the field. The Cougars scored just 22 points in the second half after piling up 40 in the first half, including a 12-4 advantage on second-chance points.

“It was a tale of two halves for us,” Brannen said. “We were emotional and didn't handle them making shots very well in the first half. We stuck to the game plan, but instead of executing, we were emotional. The second half, we came out and really defended. Once we got settled won and executed, I didn't think the lead would bother us.”

Nate Hinton added 16 for the Cougars, who had a five-game winning streak snapped.

An official had to step between Houston’s Fabian White Jr. and Cincinnati’s Trevon Scott as the two jockeyed for position on an inbounds play – 18 seconds into the game.

Houston: The Cougars slipped to 1-17 in program history in Cincinnati.

Cincinnati: The Bearcats moved into a tie with Houston for second place in the AAC.

Cincinnati: The Bearcats play the first of two straight AAC road games on Thursday at No. 23 Wichita State.