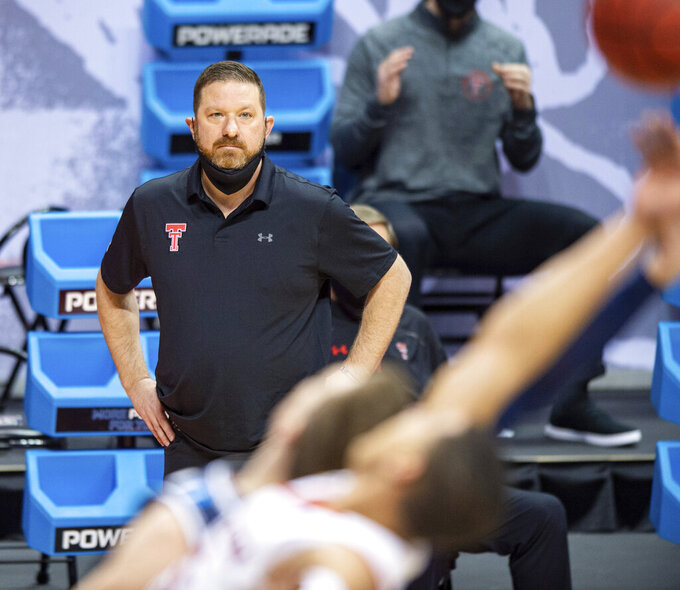 Texas Tech head coach Chris Beard watches the action on the court from the sideline during the first half of a first round game against Utah State in the NCAA men's college basketball tournament, Friday, March 19, 2021, in Bloomington, Ind. (AP Photo/Doug McSchooler)

Chris Beard insists that it was the most difficult decision in his life to return to his alma mater at Texas after a successful, five-season run at Big 12 rival Texas Tech that included an overtime loss in the national championship game played two years ago.

Beard is back on the Forty Acres, where he was a student assistant for Tom Penders three decades ago. He takes over a well-funded program that hasn't won an NCAA Tournament game since 2014.

“I understand the standards of the University of Texas. I understand where our men’s basketball program is going to be and needs to be and deserves to be,” Beard said Friday. “Those expectations and standards don’t scare me. Don’t get it twisted, it’s the reason that I’m here.”

The 48-year-old Beard was formally introduced as the new Longhorns head coach on a Zoom call from the Austin campus. It came a day after a meeting with Texas athletic director Chris Del Conte that included a McDonald's breakfast in Plainview, Texas, about 45 miles north of the Texas Tech campus in Lubbock.

Beard replaces Shaka Smart, who left for Marquette after six seasons and the Longhorns not getting past the first round in three NCAA appearances. Smart took VCU to the Final Four in 2011, but never got close to that with the Longhorns. They won their first Big 12 Tournament title last month before an NCAA loss to No. 14 seed Abilene Christian, which has played Division I basketball for less than a decade.

Beard was 112-55 in five seasons with the Red Raiders. He was named The Associated Press coach of the year in 2019 as he guided Texas Tech to a 31-7 finish and the national championship game that Virginia won in OT. Tech, which also made the Elite Eight in 2018, lost in the second round of this season’s tournament.

“It was most the difficult decision in my life to leave a place where we had an amazing five-year run from where we started all the way to an overtime game in the final,” Beard said. “Those relationships are real and I’ll always be appreciative and grateful for my time in Lubbock, Texas.”

His alma mater last made the Final Four in 2003, its only national semifinal appearance since 1947, when the tournament had only eight teams. The Longhorns went to 16 NCAA tourneys under Rick Barnes from 1999 to 2015, but haven't made it out of the first weekend since reaching the regional finals in 2006 and 2008.

“This program is a Monday night program,” Beard said, referring to the national championship game. “I’m not afraid to talk about it from day one.”

Texas Tech athletic director Kirby Hocutt said the Red Raiders tried hard to keep Beard, even offering him a contract designed to keep him in Lubbock for his entire career. He said he was frustrated it didn't work out and that Beard, also an associate head coach for the Red Raiders from 2001-11 for Bob Knight and then Pat Knight, instead landed at an in-state rival.

Beard said he was already in the season when Texas Tech presented the idea of a rolling contract last fall, and that his focus then was on the team. He said there were some conversations when the season ended, but didn't elaborate. Texas Tech's last game was March 21, five days before Smart left the Longhorns to return to his home state.

“The timeline, you know, is what it is,” Beard said. “I have nothing but respect and appreciation for Kirby and that staff.”

Del Conte said Beard was the only target for the Longhorns, and that they spoke for about three hours Thursday before Beard drove back to Lubbock and later joined him to fly to Austin.

“He came back an emotional wreck,” Del Conte said. “He was so sad about what was happening at Texas Tech, the players he was leaving behind. I knew what we were getting in a human being, someone that cares deeply about people. He's an incredible basketball coach, he's a better person.”

"We went after a program-changing hire for our men’s basketball program,” school president Jay Hartzell said before mentioning the earlier football coaching search with Del Conte and regents chairman Kevin Eltife. “We’ve made a good team and have had what I believe to be a couple of huge wins. That said, I’m expecting we won’t have to do this together for those two sports for many, many years to come.”