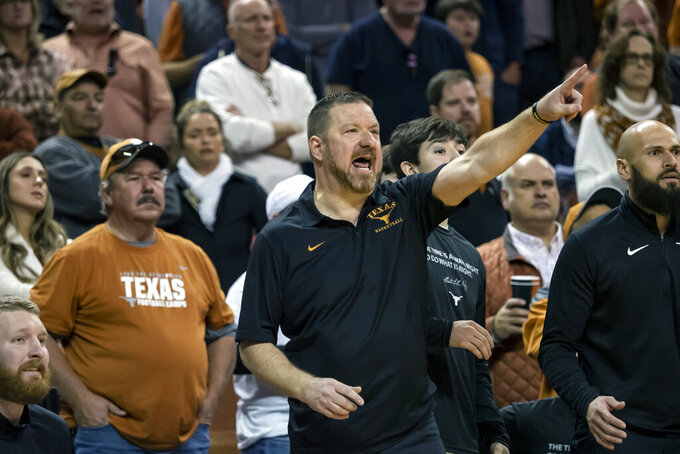 Chris Beard fondly recalls enchiladas from a favorite spot, the BBQ sandwiches at one of the town's oldest joints and certainly that NCAA national championship game appearance while he was at Texas Tech.

Red Raiders fans only feel the betrayal of the coach who left Lubbock last year for their most-hated rival, no matter that Texas is his alma mater. And they have been waiting eagerly for his return.

Beard makes his first visit as coach of the 23rd-ranked Longhorns on Tuesday night, three days after Texas Tech students were already camping out to get in even before the end of the last game for the 14th-ranked Red Raiders. The game has been sold out for more than a month, and the cheapest upper-level seats available on the secondary ticket market Monday night were going for about $300.

While Beard tried to downplay the significance of his return, calling it the next game on the schedule and with lots of personal connections, he did acknowledge that he isn't surprised about any animosity toward him from those same fans who loved him not too long ago.

“Part of it, man. Change happens in life and changes in sports,” Beard said. “No regrets. I think we left the job better than we found it. ... No regrets at all. You know, chose to come back to my alma mater and try this challenge, and all of us have the right to make choices. And you know, that’s what we did.”

Videos posted on social media Monday night showed Texas Tech students and fans lining both sides of a tunnel entrance as the Longhorns team bus arrived at the arena. There were chants in unison using an expletive directed at Texas.

When the bus was later backing out to leave, with Beard sitting in the front row facing them, a large group of people followed with many of them giving him the middle finger.

Texas Tech and Texas have identical 16-5 records. Both are also 5-3 in the Big 12 going into the game that will wrap up the first half of their conference schedules.

The Red Raiders are 13-0 at home, including a win over Kansas, under first-year coach Mark Adams. The 65-year-old Adams, who was Beard's top assistant and who grew up about 40 miles away from the Lubbock campus, stayed and got the job he had always dreamed of having at his alma mater.

There certainly won't be the same kind of reception in Lubbock for Beard like what Rick Barnes got in Austin o n Saturday night, when the coach who last took the Longhorns to the Final Four in 2003 paid a visit with his Tennessee team.

Before the Tennessee game, Texas players wore warm-up shirts that read “Thank You Coach Barnes.” There was a video tribute before the game to the coach who won a school-record 402 games over his 17 seasons before getting fired in 2015.

Adams, speaking earlier Monday, said he wasn’t surprised at some of the hostility from fans toward the former coach.

“Oh, it’s kind of a love-hate deal, a lot of emotion there. It’s to be expected,” Adams said, who then reminded fans that no matter how they feel about Beard, ”it’s a Big 12 game, it’s a big game for us.”

Texas Tech is bringing in legendary wrestler Ric Flair to further hype an already fired-up fan base before and during the game.

“We understand it’s going be a hostile environment, but we think we’re built for this,” said Timmy Allen, whose free throw with six seconds left was the difference for the Longhorns in a 52-51 win over Tennessee.

Beard, who previously was at Tech from 2001-11 as associate head coach for Bob Knight and then Pat Knight, was 112-55 in his five seasons as head coach. The Red Raiders went to the NCAA Elite Eight in 2018, then a year later finished 31-7 with an overtime loss to Virginia in the national title game.

“I was there 15 years and I gave it everything I had. I didn’t take one day off mentally or physically,” Beard said. “Our success together is real, it’s well documented."

The Red Raiders have eight newcomers this season, including seven Division I transfers. There are only five remaining who played for Beard last season, including standouts Terrence Shannon and Kevin McCullar. One of the transfers, leading scorer Bryson Williams, played the past two seasons at UTEP for Rodney Terry, now Beard's top assistant at Texas.

“A lot of respect for that program and coach. ... Togetherm we did build an undeniable home court advantage and look forward to playing in that environment,” said Beard, adding that he wishes the Red Raiders nothing but the best while respecting the fans and everyone in Lubbock.

As for getting a chance to savor some enchiladas or BBQ sandwiches, that will probably have to wait for another time.

“I love the food in West Texas, in Lubbock,” Beard said. “This will be more of a business trip, so it’ll probably be another one of those catered kind of fluffy meals.”