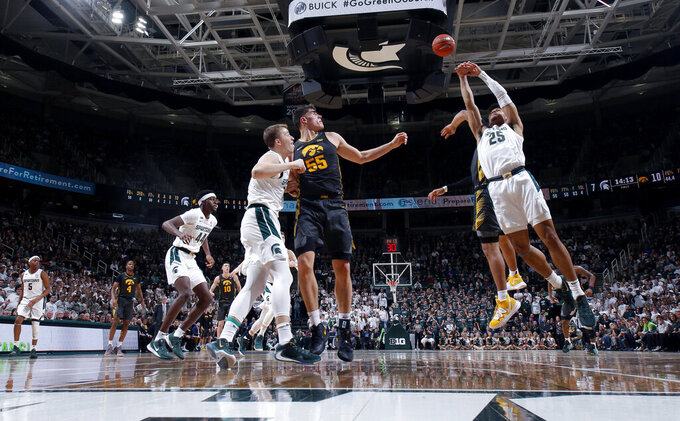 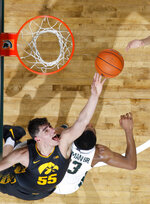 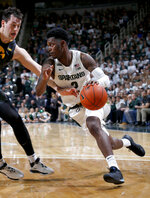 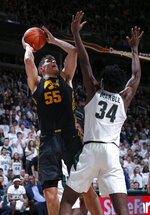 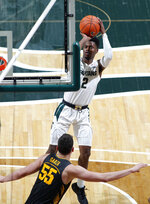 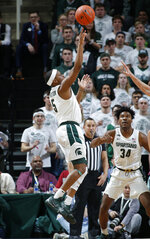 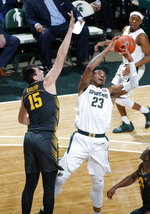 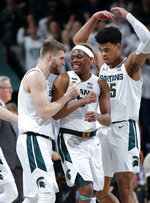 EAST LANSING, Mich. (AP) — Cassius Winston scored only one point in the first half and it looked like his team's slim shot to win another Big Ten title was vanishing.

The All-America point guard bounced back and scored 19 of his 20 points in the second half, helping No. 24 Michigan State rally to beat 18th-ranked Iowa 78-70 on Tuesday night to keep its conference championship hopes alive.

“Cassius had a miserable first half," Spartans coach Tom Izzo said. “He did what true champions are supposed to do and just did an unbelievable job in the second half."

The defending league champion Spartans (19, 9, 11-6 Big Ten) moved into sole possession of second place in the conference, 1 1/2 games behind No. 9 Maryland, with their third win in four games.

“We did a good job of fighting and holding it together,” Winston said.

The Hawkeyes (19-9, 10-7) started the night tied for second in the Big Ten and ended it slipping to sixth place, possibly making an impact on their seeding for the conference tournament in two weeks.

Iowa's Luka Garza scored 20 on 8 of 21 shooting against a lot of attention.

“They were really physical with me, probably as physical as a team has been with me this entire year," Garza said.

Ryan Kriener had 18 points before fouling out late, and Connor McCaffery added 11 points for the Hawkeyes.

“Michigan State doesn’t double so they were going to live with other people scoring," Iowa coach Fran McCaffery said. “Connor and Kriener stepped up."

“He was our best all-around player," Izzo said.

Winston barely scored in the first half, and Xavier Tillman did not have a point before halftime after going to the bench early with two fouls.

With Michigan State's top two scorers not producing, Iowa controlled the first half and was up 33-27 after 20 minutes.

Winston bounced back in the second half and his team did, too. He made a 3-pointer on a designed play 30 seconds into the half and set up Tillman for a go-ahead basket in the lane midway through the half.

“What I’m looking for (Winston) to do is take over games," Izzo said. “And in the second half, he took the game over and that was pretty cool to see.”

Henry put the Spartans ahead for good at the free throw line with 4:17 left. They held onto a late lead after wasting one in the final minutes of their last home game against the Terrapins.

Tillman's second blocked shot of the game with 1:11 left against Garza gave the junior 147 for his career, surpassing the Michigan State record set by Matt Costello in 2016.

“What a great way to do it because Garza is really, really good,” said Izzo, adding he is pushing for Tillman to win the Big Ten's defensive player of the year award.

Hawkeyes guard Joe Wieskamp, who averages nearly 15 points to trail only Garza, had just five points on 2 of 5 shooting.

“He struggled shooting and scoring, yeah," McCaffery said. “In fairness to him, he took good shots that were open and he was defended well."

The Spartans have an opportunity to make a big jump in the poll if they can also beat the ninth-ranked and first-place Terrapins on the road this week. The Hawkeyes will have a chance to hold their position if they can bounce back with a win over No. 16 Penn State.

Iowa: Garza can't do it alone if the Hawkeyes are going to have a successful season and he had help at Michigan State with Kriener and McCaffery scoring in double digits.

Michigan State: Watts and Henry contributed offensively, an encouraging sign for a team that needs more than just Winston and Tillman to score.

“With Cash down and X (Tillman) out, I needed to be the guy to make something happen," Watts said.