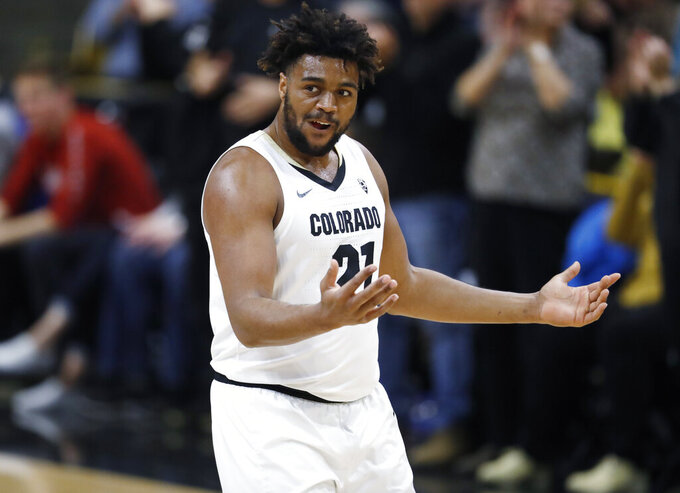 Colorado forward Evan Battey urges on the crowd during a timeout against UCLA in the second half of an NCAA college basketball game Thursday, March 7, 2019, in Boulder, Colo. (AP Photo/David Zalubowski) 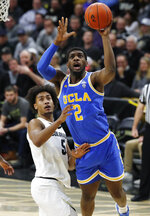 Tyler Bey scored a career-high tying 27 points, Shane Gatling had 26 and Colorado led throughout to beat UCLA 93-68 on Thursday night.

Both Bey and Gatling were dominating in the paint, scoring on an array of dunks, layups and short jumpers in the lane. Bey added 13 rebounds for his 13th double-double of the season.

"In the second half, I thought we penetrated (UCLA's) zone," said Colorado coach Tad Boyle, who picked up his 184th career win with the Buffaloes, tying Ricardo Patton for second on the school's all-time list. "We got to the free throw line. We attacked the basket and we got some plays at the rim. Tyler had 27 points and a lot of those were on dunks and plays at the rim and that's what you have to do. You have play inside-out against the zone. You can't just settle for 3s."

"Early in the year, we struggled against a zone defense, but coach has been working with us in practice," Colorado guard McKinley Wright said. "Now that we look at it, there's a lot of teams playing zone. We've been doing a very good job of carving them up, and that's credit to all my teammates being in the right spot and sharing the ball."

The Bruins, who entered as the highest scoring team in the conference, were outshot by the Buffaloes 49.3 percent to 35.9 percent and trailed from the outset.

"I don't know if they did any one thing," interim UCLA coach Murry Bartow said. "We just at critical times did not get stops and at critical times offensively we just weren't able to make plays. That sounds pretty simplistic, but I thought we got the ball into the paint a lot, we were kind of begging and hoping for call when we didn't finish strong enough around the rim. Then at the other end, we just weren't able to stop them. Just couldn't get a stop."

Up by 10 at the break, Colorado stretched its lead to 67-50 with 7:25 left to play, getting successive layups from D'Shawn Schwartz and dunks from Gatling and Bey to help offset a 3-pointer from Wilkes and a 3-point play by Moses Brown.

The Bruins managed to get back to within 12 points after Hands converted a 3-point play, but Gatling answered with a 3-pointer from the left wing and then got a steal on the other end to start a fast break that he finished with a feed under the basket to Bey for a dunk.

Colorado kept up the pressure down the stretch with Bey soaring above the fray for two more dunks.

The Buffaloes scored seven of the last nine points in the final 1:47 of the opening period to go in front 37-27 at halftime for their largest lead to that point. Wright, who finished with nine points, nine rebounds and five assists, punctuated the burst with a driving layup just ahead of the halftime buzzer.

UCLA: The Bruins seemed a little flat-footed from the start and never found their rhythm offensively. They continued their struggles away from home, falling to 3-9 this season on the road.

Colorado: The Buffaloes are hitting their stride late in the season, and Bey and Gatling have emerged as players to be reckoned with. The Buffaloes have won seven of their last nine games with one game left in the regular season before going onto the Pac-12 Conference tournament next week.