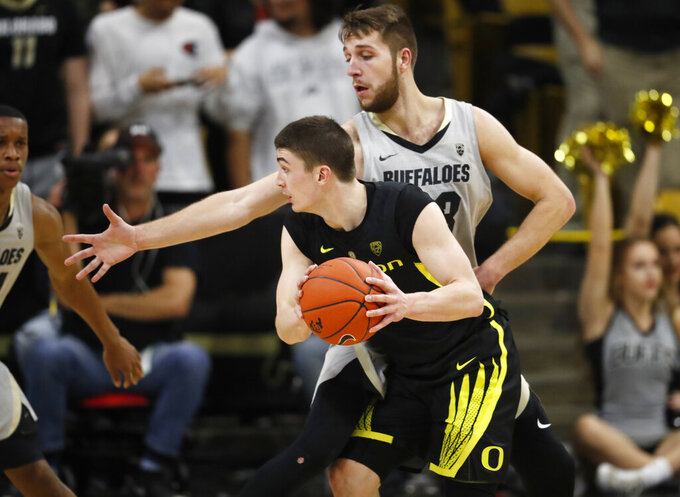 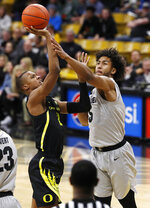 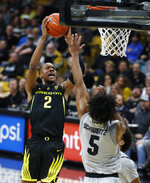 BOULDER, Colo. (AP) — Walking into the CU Events Center on Saturday fans were handed a poster of Colorado's Tyler Bey. They were treated to a show from the sophomore on his night.

Bey chipped in 10 rebounds for his sixth double-double of the season and scored 13 points in the game's first nine minutes.

"He was dialed in tonight," Colorado coach Tad Boyle said. "I love Tyler Bey. I always have and always will. I was really proud of how he responded to a very disappointing performance on Thursday, not that he was the reason we lost but when he elevates his game so do we."

Bey's quick start was followed by the rest of the Buffaloes who began the game on a 24-5 run and took a 40-17 lead into the break. It was the most points allowed, and the second-fewest points scored, by the Ducks in a first half this season.

Louis King had 12 points and Payton Pritchard added 10 for Oregon (13-9, 4-5), which struggled with foul trouble all game.

"Poor execution on the offensive end," Altman said. We didn't run anything. Our guys are really just stuck in the mud. Defensively a poor effort we got beat on the boards. We got beat in every facet of the game. "

In the middle of Colorado's big first-half scoring spurt forward Tyler Bey had a massive put-back dunk. Coming from the weak side block nearly eight minutes into the game, the forward threw it down hard over Oregon's Miles Norris.

"I've been watching that since I was in high school," Colorado's Lucas Siewert said of Tyler Bey. "To see him come to play like that is pretty fun."

STAT OF THE NIGHT:

Oregon shot 31 percent for the game, a low for the Ducks in Dana Altman's nine years in Eugene. The last time Oregon shot worse than Saturday was Feb. 6, 2010 in a 62-42 loss to rival Oregon State.

Colorado: The Buffaloes are attempting to work their way up from the bottom of the conference. With half of Pac-12 play complete, Colorado has a home-heavy slate ahead and currently sits in ninth.

Oregon: The Ducks have never won in their eight trips to Boulder. Coming off a road split this weekend, the Ducks are also trying to work their way up a crowded Pac-12 table.

Colorado will travel to Los Angeles to take on UCLA on Wednesday night and then USC on Saturday.