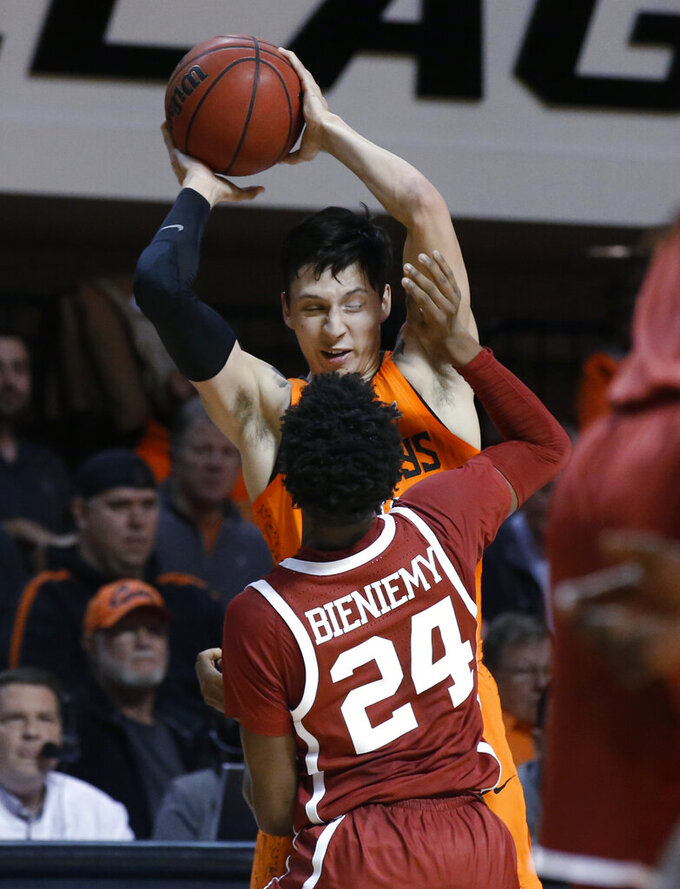 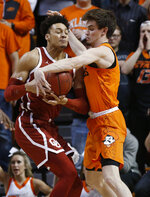 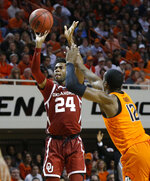 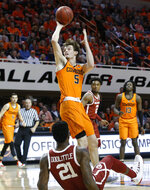 The freshman point guard scored a season-high 17 points, and Oklahoma rallied from a 19-point deficit to defeat Oklahoma State 70-61 on Wednesday night.

In his first start last Saturday against Texas, Bieniemy made three 3-pointers in the final four minutes of a close loss. Now, he's taken another step forward.

"He's been great," Oklahoma coach Lon Kruger said. "He gives us good direction, and has really good instincts defensively, too. I couldn't be happier for him and we needed him, and he stepped up and delivered."

Brady Manek scored 15 points and Jamuni McNeace added 13 points for Oklahoma (14-5, 3-4 Big 12), which shot 64 percent from the field in the second half. The Sooners had lost two straight to drop out of the Top 25, but they bounced back to sweep the season series.

"Proud of our guys," Kruger said. "Obviously, we dug ourselves a big hole. I thought our guys battled well in the second half. It's a big win for us."

Oklahoma State, which kicked three players off the team last week, wore down at the end of each half. The Cowboys went scoreless for the final 5:35 of the game as the Sooners pulled away. Only seven Oklahoma State saw action, and just six logged more than nine minutes. Oklahoma had eight players with at least 15 minutes of action.

"We're a little bit down right now, we don't have the bodies," Oklahoma State coach Mike Boynton said. "There's no doubt about that, but our program has a spirit, has a life, and young kids, they see that."

Oklahoma State jumped out to a 14-5 lead as Waters scored eight quick points. The Cowboys pushed that advantage to 28-9, but Oklahoma went on runs of 10-0 and 11-0 to climb back into the game. The Cowboys led 37-31 at the break behind Waters' 14 points.

"I admire the way our kids approached the game," Boynton said. "They came in expecting to win. I think we played to win the game. We played really aggressively early."

Waters opened the second half with a 3-pointer, but the Sooners kept chipping away. A layup by Bieniemy tied the game at 54 midway through the second half, and McNeace later scored in close to give Oklahoma the lead at 59-58.

Bieniemy got ahold of the ball after a scramble and splashed a 3-pointer with about three minutes remaining to give the Sooners a 66-61 lead.

"There's not really any changes, I've just been going with the flow of the game, how it's been going every night," Bieniemy said. "It's going to be somebody different every night — that's just how it is on this team. So we just take whatever we can get that night."

Oklahoma: The Sooners couldn't afford to lose this one, given all the issues Oklahoma State is having. They didn't panic when they got behind and methodically worked their way back into the game. The Sooners have struggled on the road in recent years, and this should give them some confidence.

Oklahoma State: The Cowboys nearly pulled off another of Boynton's stunners, but they didn't have the firepower to keep answering Oklahoma's surges. It was a promising effort for a young, depleted team.

McNeace, who has been battling an ankle injury, posted his highest point total since Nov. 27. He made 5 of 6 field goals and 3 of 5 free throws in 19 minutes.

Waters made 4 of 8 3-pointers and 7 of 13 shots overall. He fouled out after playing a little more than 35 minutes.

Oklahoma State guard Curtis Jones: "I don't think we're far off. I think we're right there. Especially today, it came down to a couple of possessions. I think that we just tightened up at the end, and if we continue to believe and continue to trust each other, then we'll be fine."